Ilya Kovalchuk matched the great Pavel Bure, Kirill Kaprizov got a hat-trick and Sergei Mozyakin scored his first Olympic goal at the age of 36 as the Russians roared back to form against Slovenia.

Oleg Znarok’s men powered to an 8-2 victory over the Slovenes in a game studded with landmark moments, and the performance went a long way towards banishing memories of Wednesday’s disappointment against Slovakia.

Kovalchuk, who joins Bure on 11 Olympic goals, was thrilled with his landmark. “Pasha is one of the greatest forwards our country has produced, and I know he still cares about our national team,” he said. “We all read the interview he gave after the Slovakia game, and I’d like to thank him for his support.”

He also enjoyed the rest of an impressive Russian performance as the team answered some of its critics from Wednesday. “We scored lots of goals and saw several lines getting involved in the scoring,” he said. “But the most satisfying thing was the power play.

“In the first game we played the way we should, but only for five minutes. Here, we played like we should for the full 60 minutes.”

Kovalchuk wasn’t the only player to achieve a personal landmark. Sergei Mozyakin finally added an Olympic goal to his distinguished CV – and at the age of 36 he is surely the oldest Olympic rookie to score for a Russian or Soviet team at the Games. Even back in 1956, when the USSR sent its first ever hockey team to the Olympics, the oldest player, Ivan Tregubov, had only just past his 36th birthday; Mozyakin will be 37 next month.

Kirill Kaprizov claimed a hat-trick, setting up a possible scoring duel between two KHL youngsters here in Korea. He could find himself duking it out with Eeli Tolvanen for the top scorer of the Olympics, but today he was content to let his team-mates take the credit. “It was all down to my partners,” he said. “They did everything for me tonight.”

Alexander Barabanov and Ilya Kablukov rounded off the Russian scoring; Jan Mursak and Ziga Pance replied for the beleaguered Slovenes. 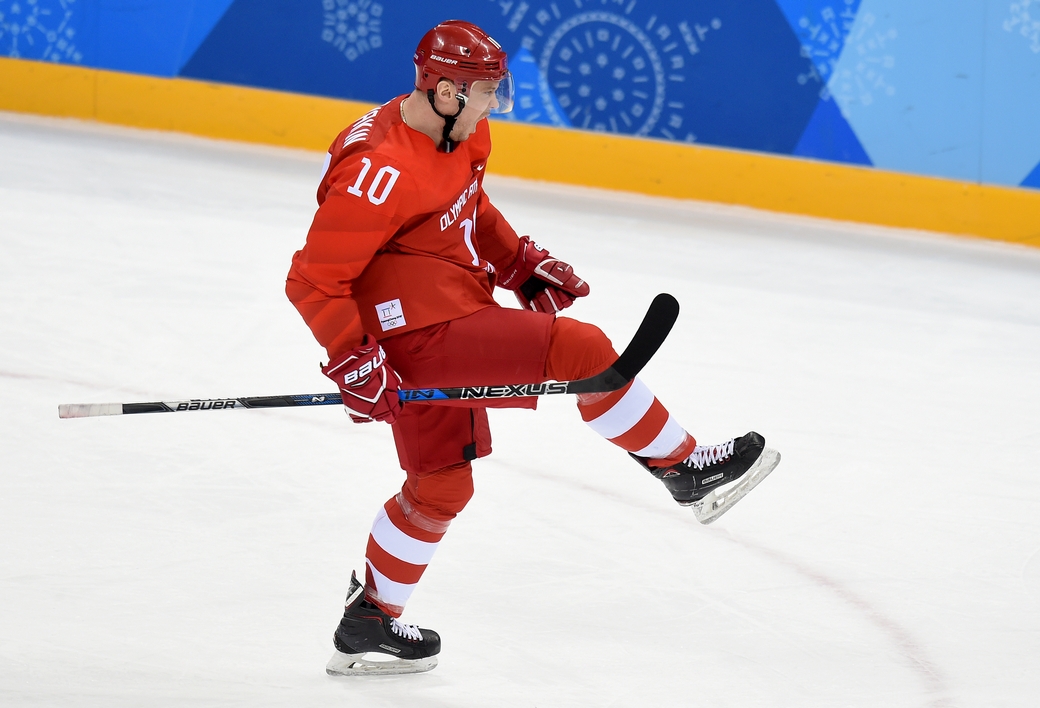 Jokerit has three players on the American roster – compared with just two on Finland’s – and that’s a big boost for goalie Ryan Zapolski. The 30-year-old is enjoying his trip to Korea with Helsinki colleagues Matt Gilroy and Brian O’Neill – two men with whom he’s built up a close friendship in Finland.

“I think any time you’re on a foreign team, the imports kinda gravitate towards one another,” he said. “We all live in the same apartment building, so we hang out a lot. We’re really close. And, of course, it’s nice to come to a team like this and find some guys you’re close with.”

As well as a successful season on the ice, Helsinki has plenty of other attractions for its expat athletes – and Zapolski and his countrymen are enjoying their time in Finland. “There’s a lot of really nice places in Helsinki, so we get to go to them a lot,” he said. “We have a favorite restaurant, a place called ‘Pasta’, and we go there all the time! They’ve gotten to know us pretty well now, so they look after us.”

On the ice, team USA has one win against Slovakia and an overtime loss to Slovenia ahead of Saturday’s Group B showdown with the Olympic Athletes from Russia. Despite the wider significance of the Trans-Atlantic match-up, Zapolski isn’t expecting anything more than a tough hockey game.

“I’m used to playing the Russians all the time in the KHL, so it’s not going to be weird for me,” he said. “I don’t think anybody is going to be overtaken by the moment. We’re doing the same as we’ve done our whole lives.” 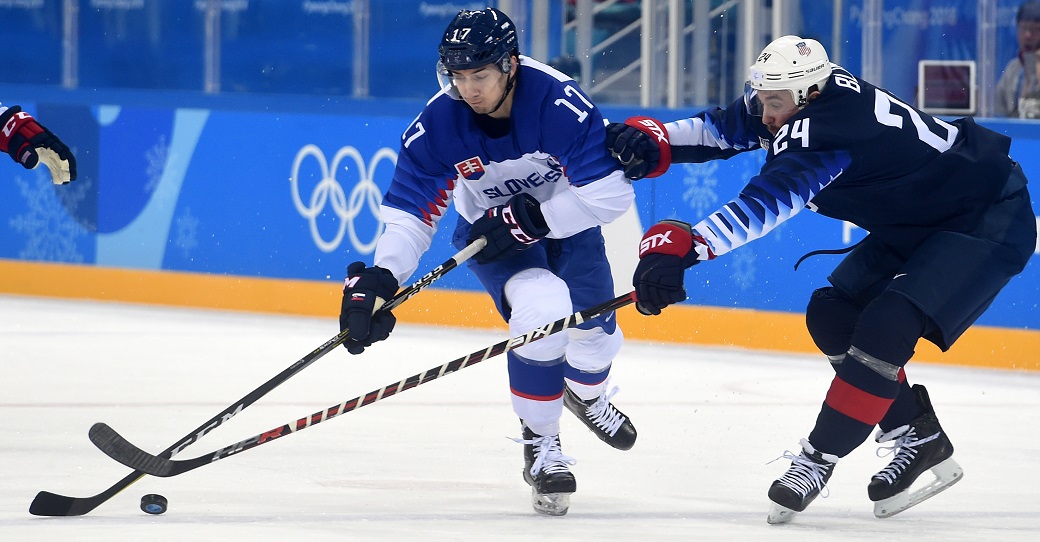 When Eeli Tolvanen gets the puck at the Hartwall Arena, a buzz goes around the Jokerit crowd. It might not be long before the same is true in Korea, where the 18-year-old continues to impress. He added two goals to his tally today in a 5-1 victory over Norway.

The Norwegians had taken a surprise lead in this game when Patrick Thoresen beat his SKA team-mate Mikko Koskinen on an early power play. But Tolvanen showed off his devastating shooting and his slick stick-handling as he scored twice to turn the game around either side of the first intermission. Ugra’s Veli-Matti Savinainen added a third after former Dinamo Minsk goalie Lars Haugen misjudged a clearance from behind his net. Sami Lepisto got his second of the Games to make it four.

Jokerit’s Lepisto also talked up the Finnish power play after he got a goal and an assist while the Leijonat had a man advantage. "Our third and fourth lines are really good at battling in the corners," he said. "They take that first hit and keep their feet moving and I think that's a big key because the opposition defence can't really keep up for long shifts and they have to take penalties.

Dinamo Minsk goalie Jhonas Enroth made 28 saves to frustrate Germany as Sweden edged a 1-0 verdict in the other game in Group C.

Viktor Stalberg got the only goal after two minutes, assisted by Sibir duo Alexander Bergstrom and Patrik Zackrisson, but dogged German resistance kept the game live until the very end. 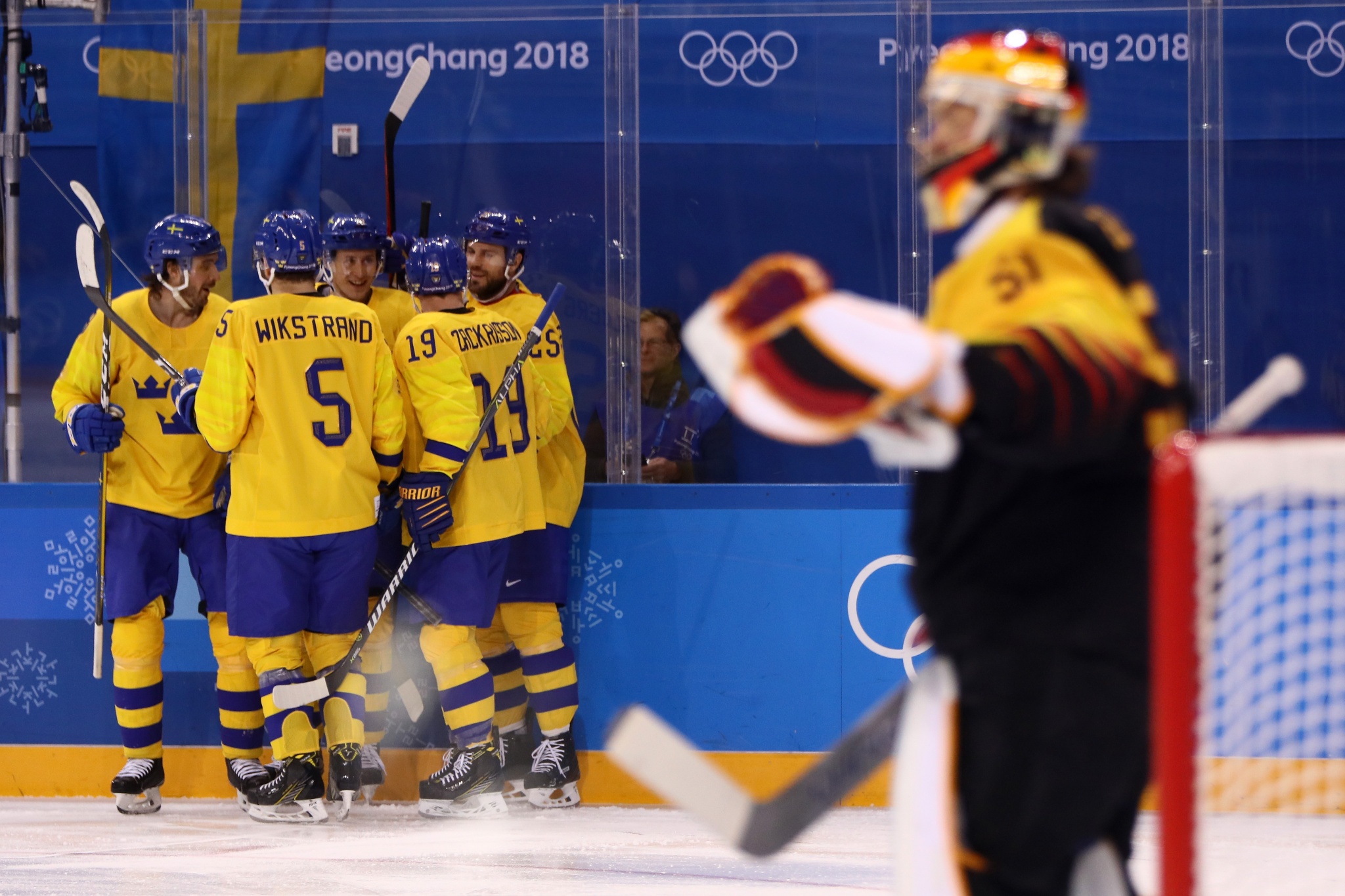