Russia might be ‘Olympic Athletes from Russia’ here, the roster might be almost entirely different from 2014 in Sochi – but the opening period of action for Oleg Znarok’s team instantly evoked memories of how the Russians started on home ice four years ago. Unfortunately, happy reflections of a slick start in Sochi were followed by painful reminders of how Russia stuttered in its first game there. And worse was to follow: the recovery that sank Slovenia in 2014 never materialized; Slovakia made off with a shock 3-2 victory.

Against Slovakia today, a lightning start saw the team race into a 2-0 lead, just as it did against Slovenia four years earlier. Vladislav Gavrikov and Kirill Kaprizov got the goals this time, the latter after a video review confirmed his swat-down on a Nikita Gusev shot was good, and Russia seemed to be easing smoothly through the gears. There was even time for a crunching hit to liven proceedings, with Andrei Zubarev taking the chance to introduce Martin Bakos to the Russian bench after bundling the Slovak forward over the boards.

But, just as in Sochi, the team seemed to slow. The chances dried up, and gradually the opposition came back into contention. Indeed, Slovakia’s response was quicker than Slovenia’s had been. Peter Olvecky fired one through Vasily Koshechkin’s five-hole late in the first period, then Bakos, who played in the KHL with Kunlun Red Star last season, tied the game on a breakaway in the last minute. Slovakia had managed something of a mini escape – right back in a game that could have been all over in the opening exchanges. 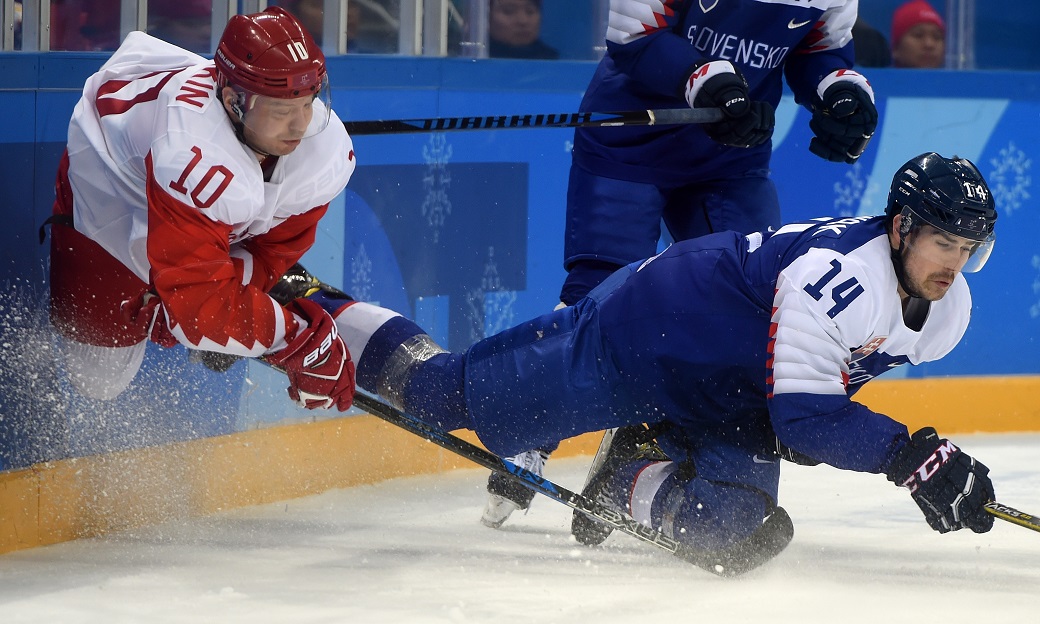 Against Slovenia, Russia regained its composure to win 5-2; here, Russia began the second period on the power play and saw Pavel Datsyuk hit the post. But although Znarok’s team maintained the pressure, it struggled to really open up a Slovak ‘D’ that gained in composure after its early lapses. The calming influences of Tomas Starosta, a long-serving D-man with Neftekhimik, Salavat Yulaev, Ugra and Slovan, former Dynamo Moscow star Dominik Granak and one-time Spartak blue-liner Ivan Baranka did much to keep the Russian offense on the outside and leave goalie Branislav Konrad relatively unruffled. 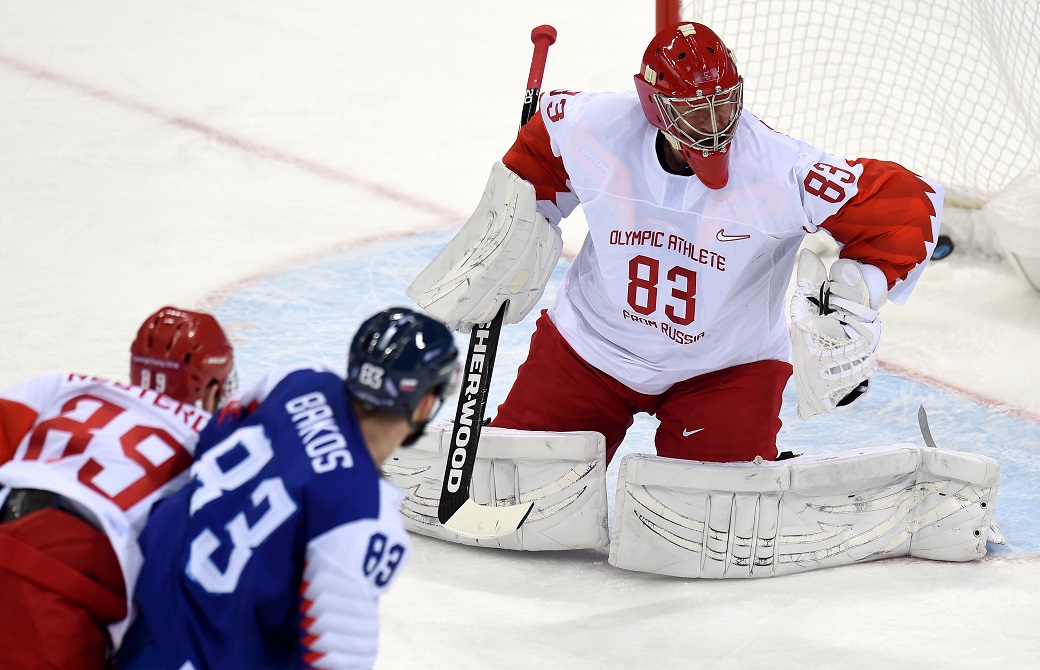 The game was beginning to drift in the third period when Slovakia sensationally took the lead. Marcel Hascak made little impact in his seasons with Dinamo Riga and Amur, but his feed for Peter Ceresnak’s slap shot set up a goal that stunned the Russians.

Down 2-3, Znarok’s team was instantly energized – but time was running out. Slovakia killed one penalty, with Patrik Lamper almost snatching a short-handed goal along the way. Ivan Telegin earned his team another PP chance, much to the disgust of Avtomobilist’s Michal Cajkovsky; Lamper again came as close as anyone as Slovakia held on again. And that was the last significant opportunity: the Russians stumbled at the first hurdle, denied by resolute Slovak defense.

"We played badly but I’m sure we’ll get better. We need to make sure we learn the right lessons from this. In the other game, Slovenia beat the Americans, so we’ve been warned that this is a very even group. Anyone can beat anyone. We need to prepare carefully and do better on the power play. We didn’t ease off after the two early goals. We still created plenty of chances. Their goalie was great, and in the first period they only had four shots. We didn’t ease off, they were just better than us."

“We need to play a simpler game, and improve on our defense. We forgot about defending, and you saw how it unfolded. Our opponent converted its chances. We allowed some counter-attacks, and Slovakia managed to take its chances. Then we conceded a power play goal and they protected that advantage until the end.”

“Nobody is starting to doubt. We just need to win the next two games. It’s not the end of the world. They had two counter-attacks and scored two goals. We had, what, five or six chances on the power play and didn’t score. That’s where the result came from.”

“We talked before the game about how if we played Russia 10 times, Russia would win most of them. But we also knew that in a one-off game, you always have a chance. At the start, maybe we were a little bit nervous – we knew how many star players they had. But after we scored, we started to believe. Then we played much better. The Russians had better chances, they had more of the puck, but our PK was did a great job. Our goalie was amazing, and we blocked so many shots in front of him.”

“We lost the game. Everything is clear. Any mistakes that we made are my responsibility. I’m not going to point the finger at the players, or any individuals, for errors. This is my team.” 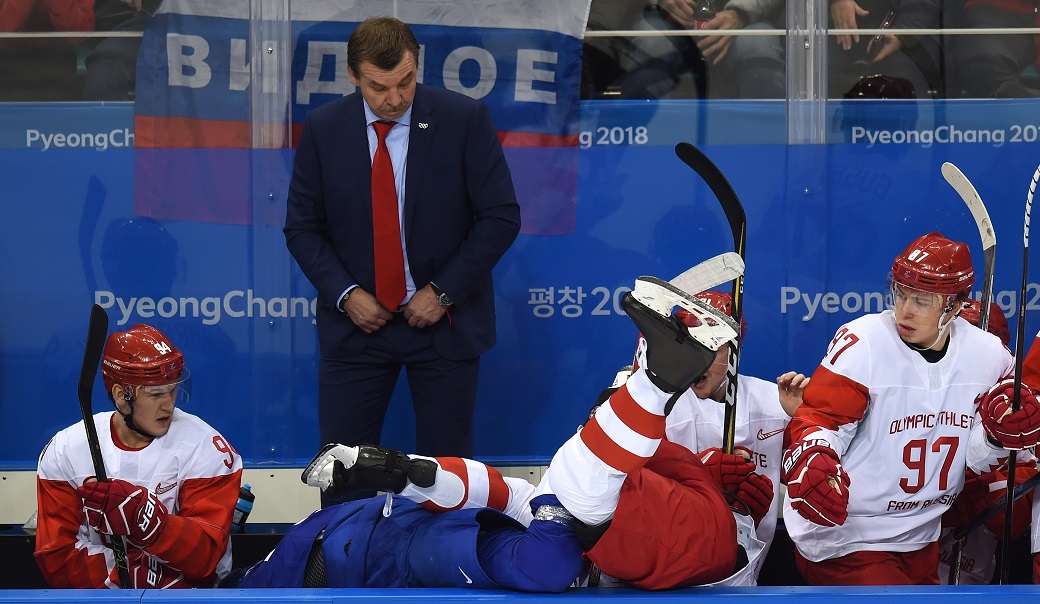 Former CSKA forward Jan Mursak produced a captain’s performance to rescue Slovenia from 0-2 down and snatch a 3-2 victory in overtime. Mursak scored twice, including the game-winner, to complete a night of shock results in Korea.

For two periods, it looked like a good night for the Jokerit connection on the USA roster. Brian O’Neill scored his team’s opener in the first period, then assisted as Boston University’s Jordan Greenway doubled the lead in the second. Goalie Ryan Zapolski and D-man Matt Gilroy looked comfortable against the Slovenian offense, and the game looked destined for a predictable conclusion.

But Jan Urbas got Slovenia back in contention, and Mursak delivered the coup-de-grace. He tied it up on 58:23, whacking home the rebound from a point shot. Then he beat Zapolski again off a feed from Rok Ticar, another member of Slovenia’s KHL contingent, to snatch a dramatic win for the underdog.