Olympic pedigree – Russian medal-winners who played in the KHL

We’re still waiting for an active Russian KHLer to win an Olympic medal – but that doesn’t mean the league is short of Russian Olympic medallists. As the action in Korea draws ever closer, here’s a rundown of some of those Lords of the Rings who went on to play in the KHL.

The Russians last won an Olympic medal at Salt Lake, back in 2002. With head coach Slava Fetisov at the helm – almost a decade before his own cameo KHL appearance in the midst of an injury crisis at CSKA – the Red Machine took bronze with a 7-2 victory over Belarus in the playoff game. And much of that roster would go on to play in the KHL – with two of them still active and heading to the Far East in search of more Olympic hardware.

In PyeongChang, these two will be the elder statesmen for a youthful Russian roster. With a pair of resumes stamped ‘been there, done that’ on both sides of the Atlantic, the SKA strike duo brings a wealth of experience of top level success for club and country. But it wasn’t always that way. Back in 2002, Kovalchuk and Datsyuk were their NHL rookie years when he joined up with Russia in Salt Lake City. Both players contributed 3 (2+1) points in six games as the team took Olympic bronze.

Since then, the pair have had plenty in common, and now they are gearing up for their fifth Olympics. Along the way, Kovalchuk claimed that sensational World Championship-winning overtime goal in Canada in 2008, ending Russia’s long wait for gold, while Datsyuk won two Stanley Cups in Detroit. Kovi fell in love with the KHL during a lock-out stint at SKA, and returned the following season. Two Gagarin Cup victories later, he’s still a key figure for Oleg Znarok – in both the international and domestic arenas. Datsyuk came back across the pond a couple of seasons later, helping Znarok to win his first Gagarin Cup in Petersburg. Now they are out to add further Olympic success to their impressive achievements. 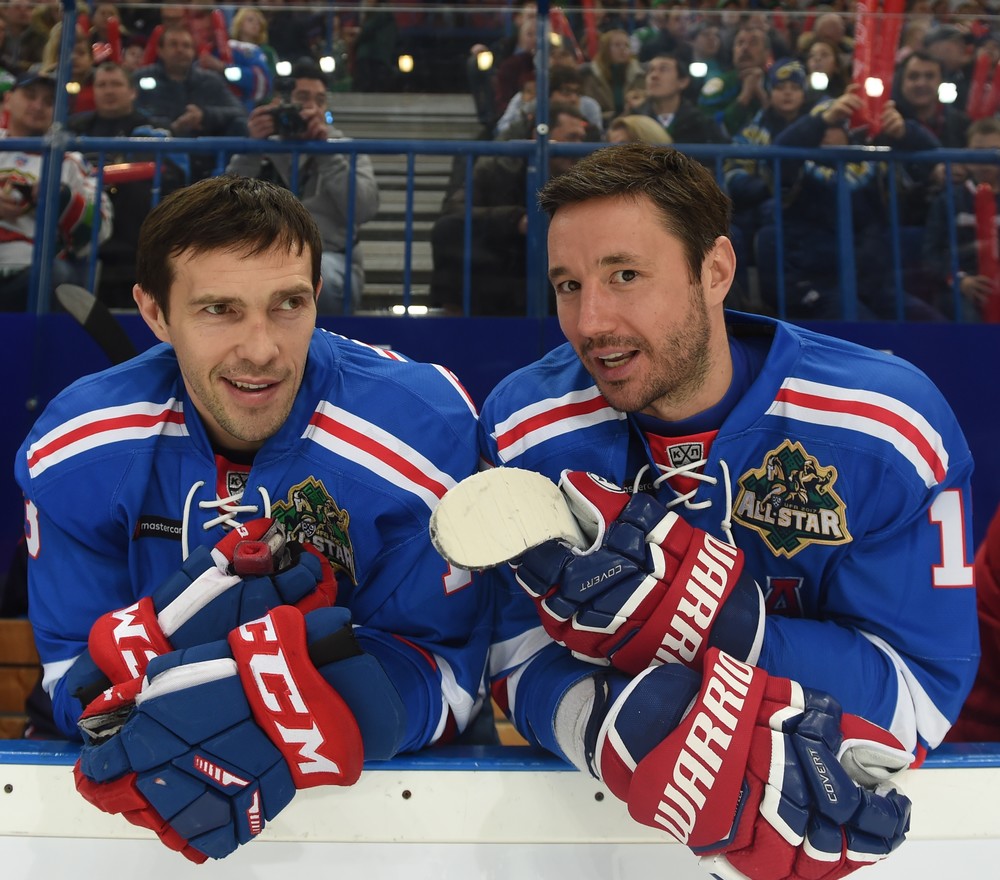 Maxim Afinogenov – another bronze medallist still active in the KHL

Afinogenov’s return to Russia in 2010 was one of the defining moments of the early KHL. He swapped the Atlanta Thrashers for SKA, became the face of one of the season’s biggest sponsorship campaigns … but then struggled to live up to the hype as the Petersburg club chopped and changed incessantly in search of a winning formula. A move to Vityaz re-energized this speedy forward, and last season he posted his best ever KHL numbers – at the grand old age of 38 – to help the Podolsk team into its first ever KHL playoff. Afinogenov is still among the leaders for Vityaz this season, with 35 points from 45 games. 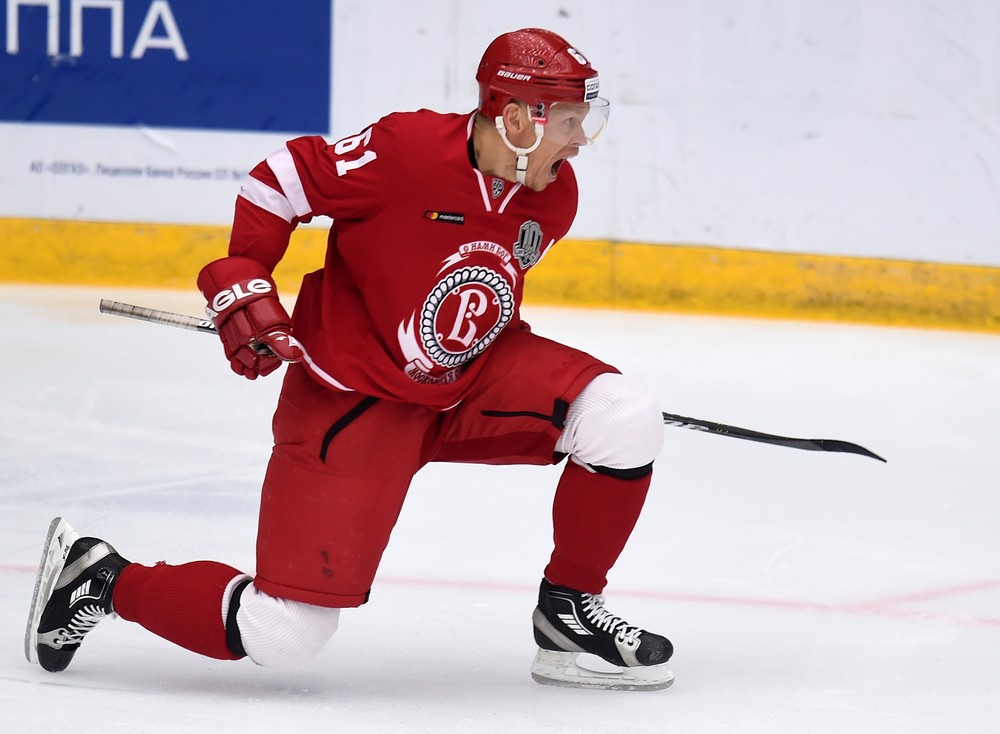 Alexei Yashin – an All-Star from the start

In the early years of the KHL, Yashin was one of the biggest stars in the competition. How big? Well, the first All-Star Games pitted ‘Team Yashin’ against ‘Team Jagr’ as the former Islanders captain came home and helped Lokomotiv to reach the first ever Gagarin Cup final. Two seasons at SKA and a brief stint at CSKA followed. Yashin was also involved at the last Olympics in Sochi, where he was GM for Russia’s women’s team. 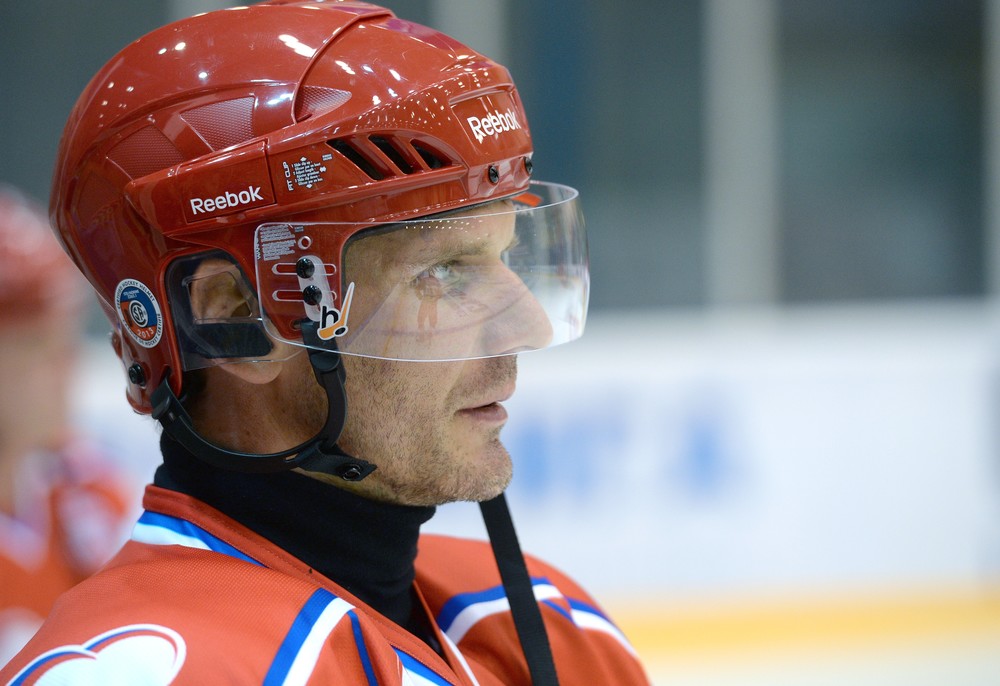 Not just a bronze medallist from Salt Lake, Kovalev was part of the Unified Team that won Olympic gold in 1992 – in the same month as he celebrated his 19th birthday. Two years later he added a Stanley Cup to his resume, a highlight in an 18-season NHL career that saw him play 1,302 games. That’s a record for a player born in the USSR.

His move to Atlant for the 2011-12 season brought plenty of attention to the Moscow Region club, but with Kovalev coming to the end of his career, his short KHL spell was not a huge success. He played just 22 games, scoring six points for the Mytishchi outfit. 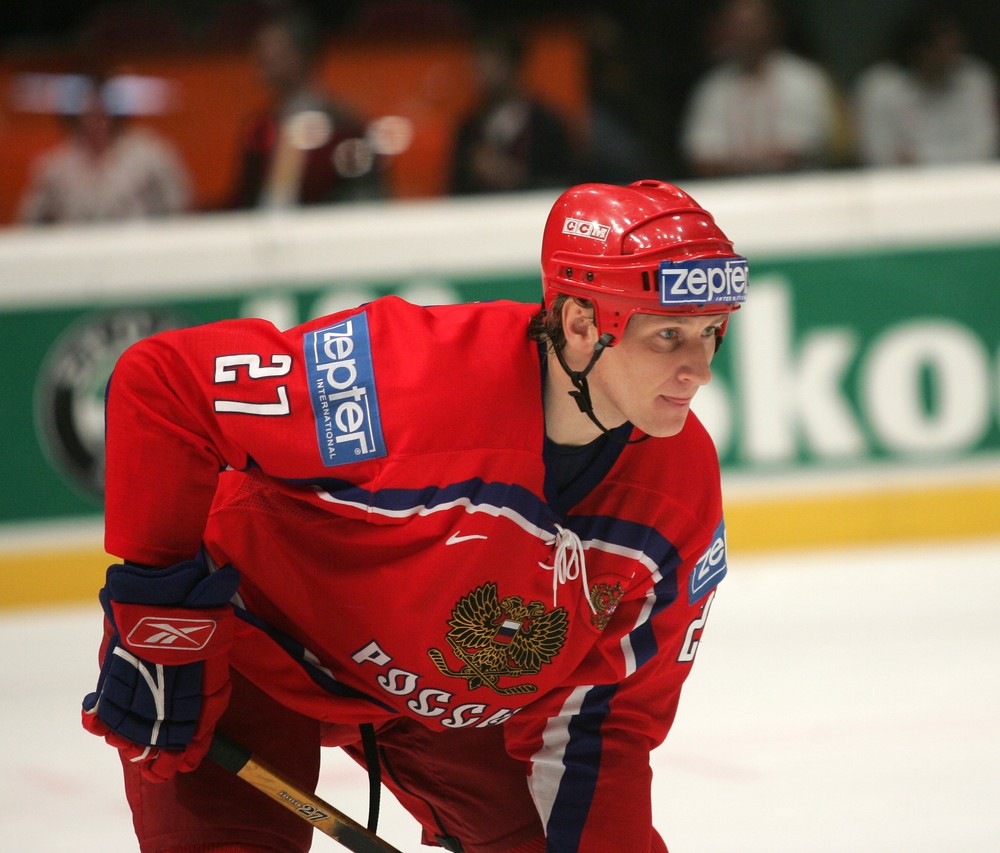 Tverdovsky was the first Russian Olympic medallist to win the Gagarin Cup, as well as the Stanley Cup and the Russian Superleague. In 2002, the Donetsk-born defenseman ended a three-year stint with Anaheim and moved to New Jersey in time to win the Stanley Cup. Then came two years in the Russian Superleague with Avangard, including a title triumph in 2004, before a triumphant return to the NHL as a Stanley Cup winner with Carolina in 2006. Returning home, he joined Salavat Yulaev and helped Vyacheslav Bykov’s team to the Gagarin Cup in 2011. After a short spell in Magnitogorsk, he retired in 2013. 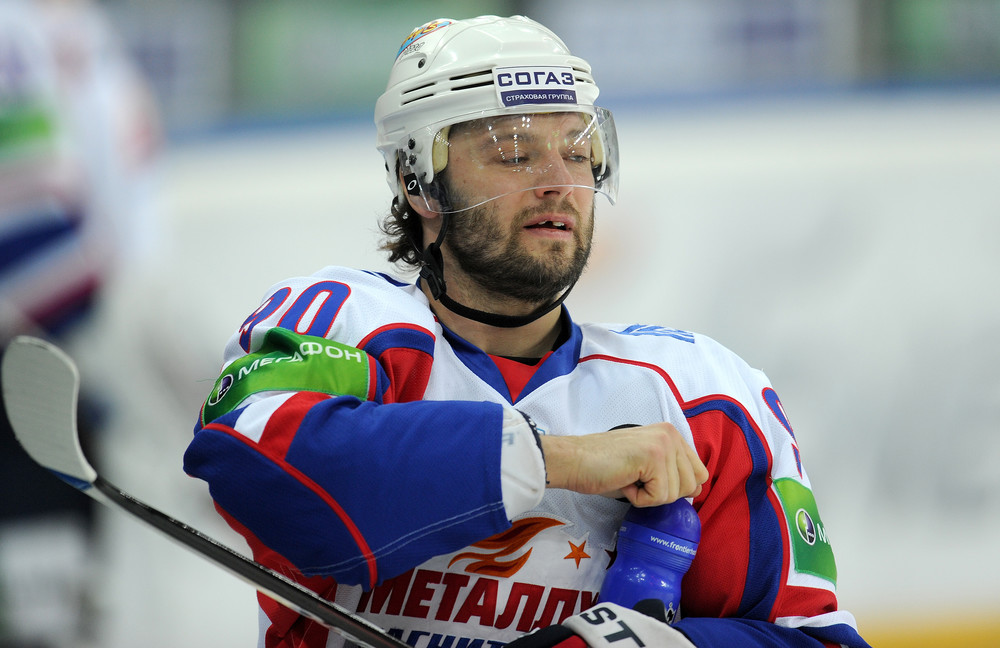 Nikolishin was a stalwart at Traktor in the early years of the KHL, captaining the team in 2009-10, the second of his three seasons with the club. Later he served as head coach of the team, replacing Karri Kivi in October 2014 before facing the sack early in the following season. A short spell behind the bench at Amur followed before he took on a scouting role with the Blackhawks. 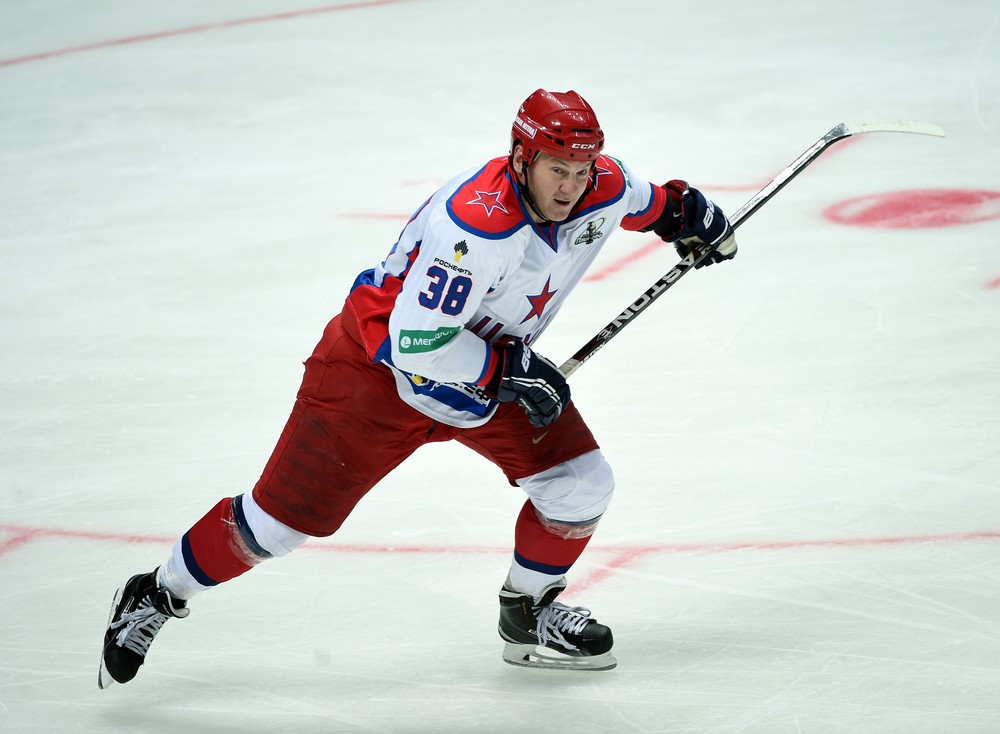 A three-time Stanley Cup winner, and part of Detroit’s famous ‘Russian Five’, Fedorov’s career hit its peak in the NHL. But he also had three seasons in the KHL with Metallurg Magnitogorsk, scoring 85 points in 179 games as he played alongside his brother, Fyodor. More recently, he became GM of CSKA and even played a couple of Spengler Cup games for the Army Men in 2013 amid another injury crisis. 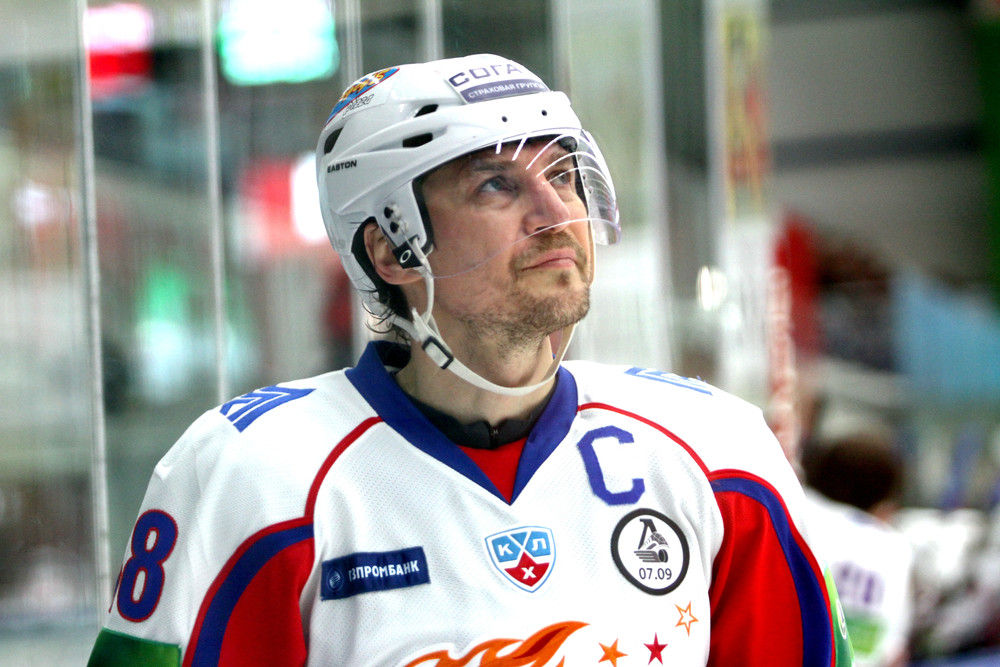 Daniil Markov – travels around the KHL

In 2002, defenseman Markov was in his second season with Phoenix Coyotes, having left Spartak in 1997 to begin an NHL career that brought him 581 regular season games for Toronto, Phoenix, Carolina, Philadelphia, Nashville and Detroit. He returned to Russia in 2007, and played for Dynamo Moscow in the final season of the Russian Super League. Markov remained with Dynamo for the first two years of KHL action, and also represented Vityaz, SKA, Metallurg and CSKA before retiring in 2014 after 255 games and 65 points in the league. 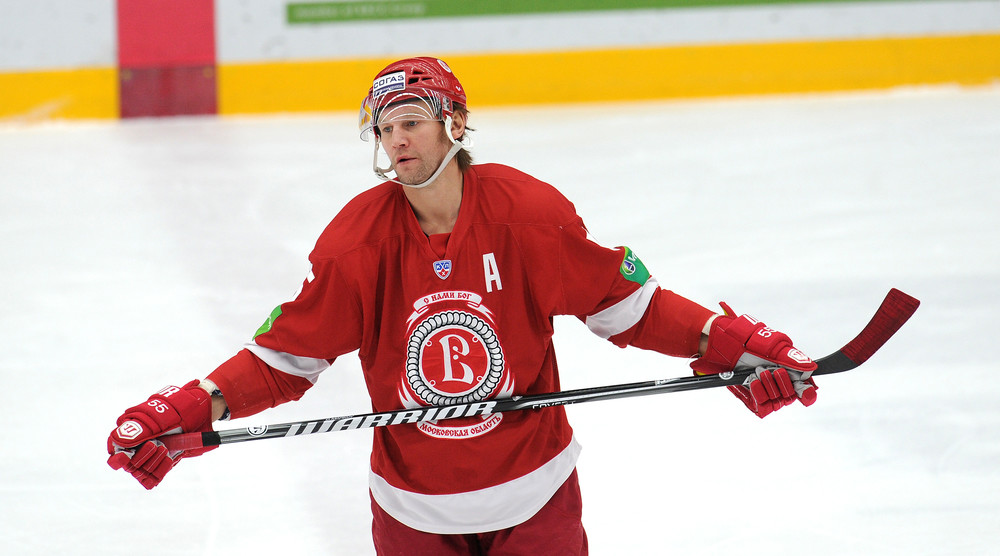 This Moscow-born forward was in at the start of the KHL, and played in the first seven seasons of the league. During that spell, he racked up the miles as he represented eight different teams before retiring after 20 appearances for Barys in 2014-15. His most productive campaign was with Traktor in 2008-09, when he had 35 points; he also had 20 playoff appearances for Metallurg in the 2010-11 season. 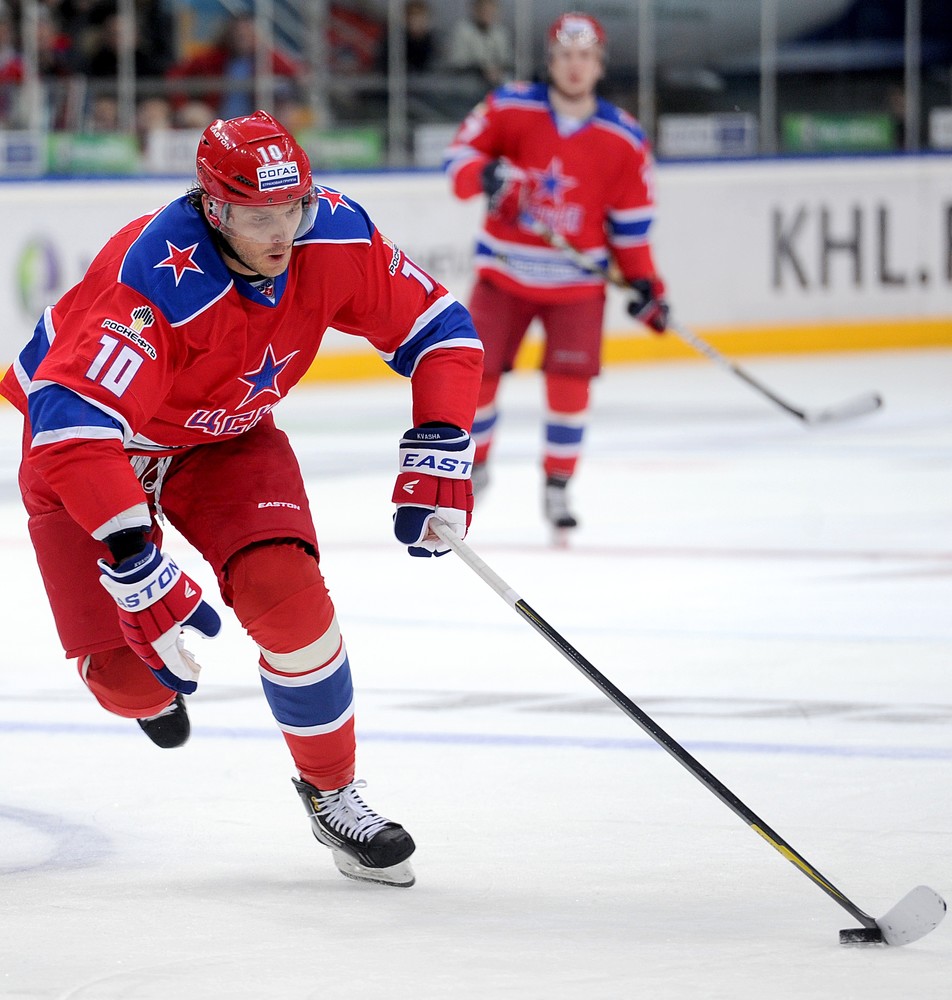 This vastly-experienced defenseman wracked up 1,301 NHL regular season appearances in a long career across the Atlantic – but managed a short stint in the KHL during the 2012-13 lock-out season. The Chelyabinsk native came back to the Urals to play for Metallurg Magnitogorsk and lined up alongside Evgeny Malkin. In total he had 37 games and 29 points that year. 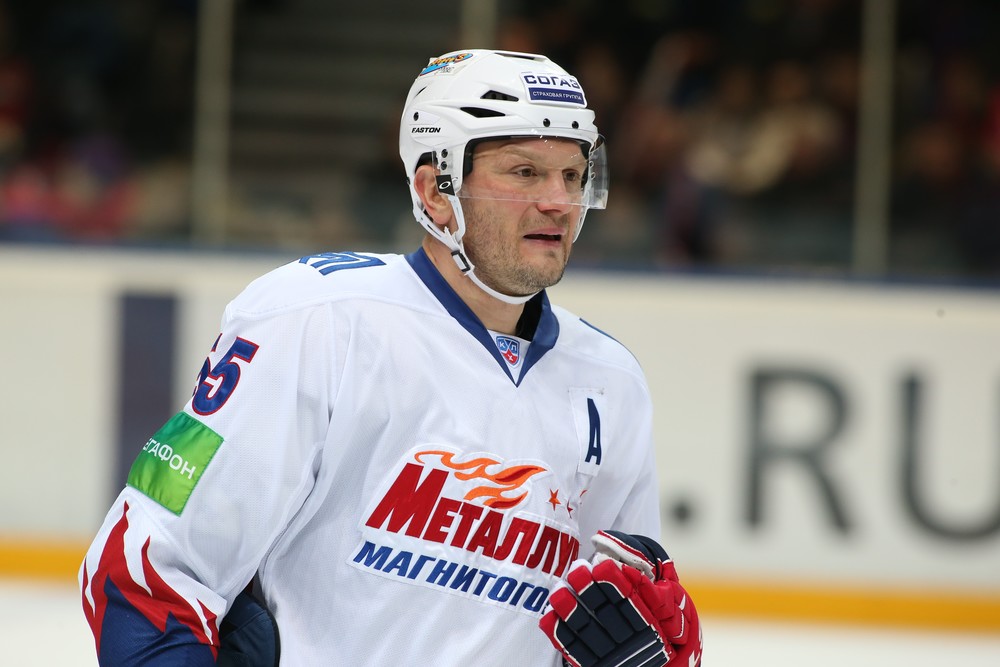 The Lithuanian-born defenseman made his first steps in international hockey in the last days of the USSR, and continued to represent the CIS and then Russia on the world stage. A distinguished NHL career with the Islanders, Rangers and Penguins ended in 2007, and he returned to Russia to play for SKA. In the KHL, he had 26 games and one assist in the 2008-09 season; in Olympic competition, he featured in four tournaments, winning gold, silver and bronze along the way. 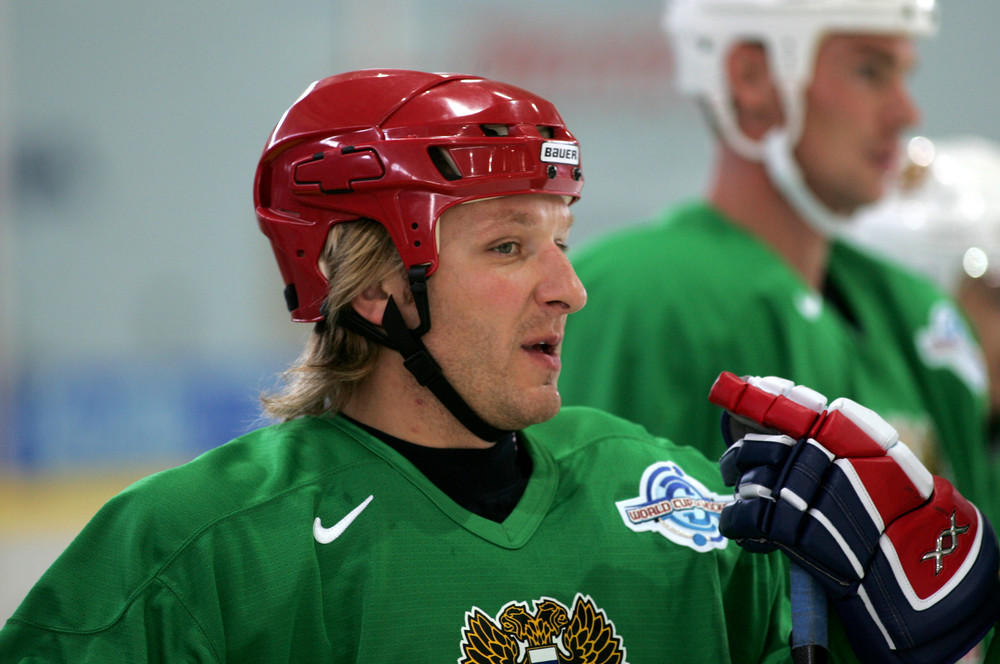 One of the most colorful Russian players, Bryzgalov’s larger than life personality made him a huge hit off the ice in a long NHL career. The goalie’s time in the KHL was limited to a dozen lock-out appearances with CSKA in 2012-13. 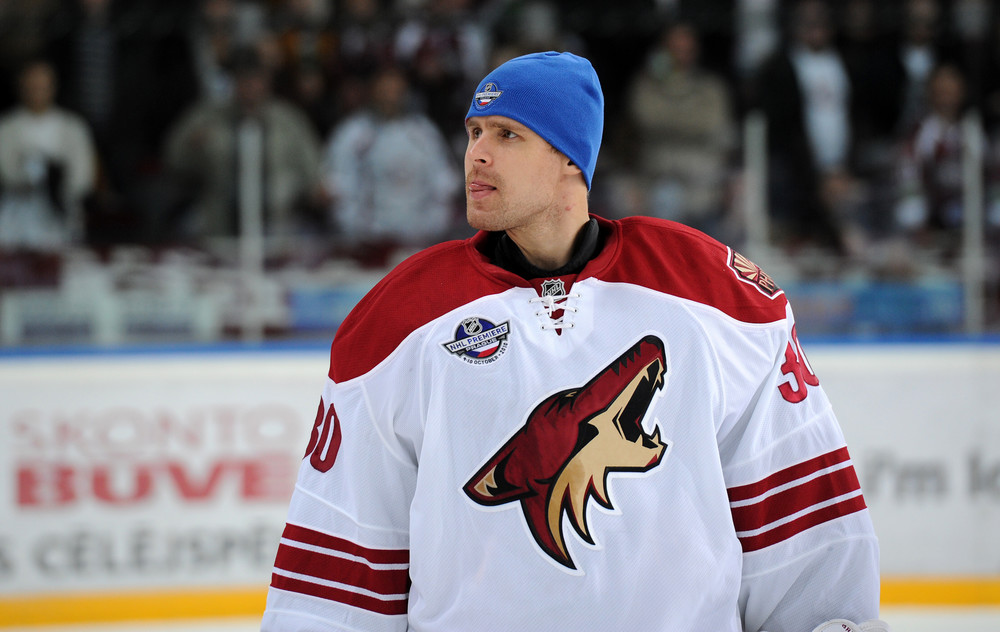 Podomatsky, Russia’s third goalie in Salt Lake, played his entire career in his homeland, but did not have the longest of careers in the KHL. The former Lokomotiv man featured in four games for Lada Togliatti in 2008-09 and played for a few more seasons in the VHL before retiring in 2013. 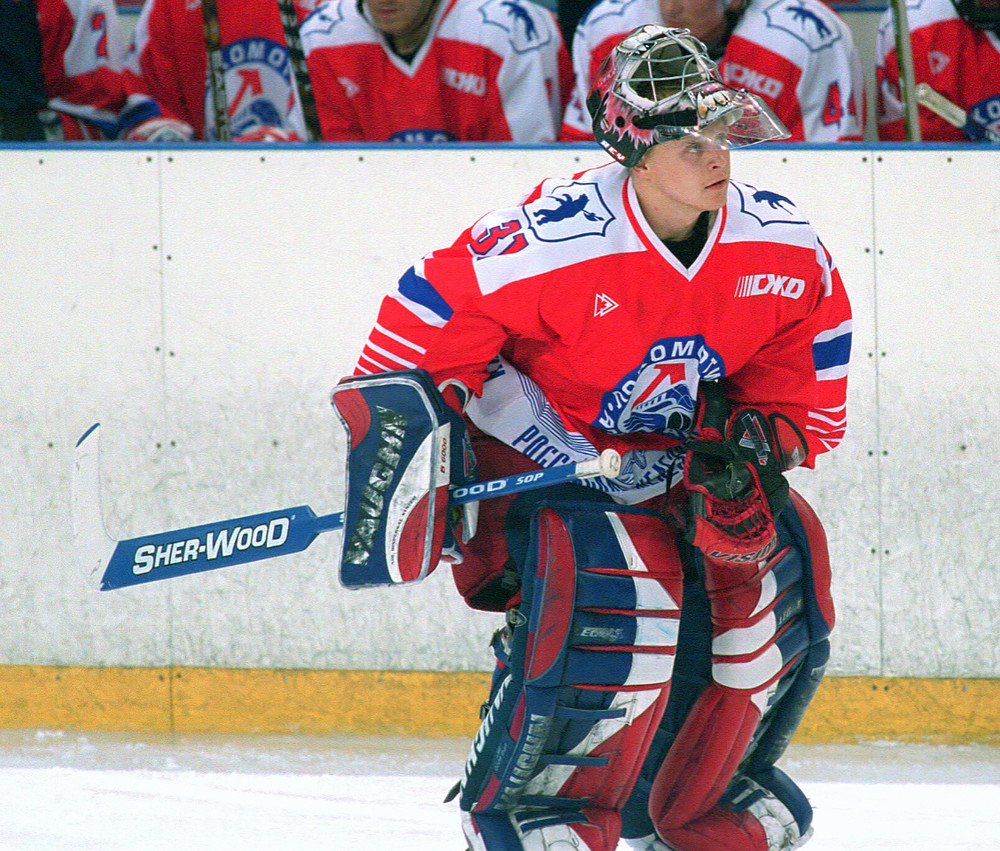 Zhamnov, a Dynamo graduate who went on to win all three colors of Olympic Medal in 1992, 1998 and 2002, never played in the KHL. However, he served as GM at Vityaz and Atlant before taking up that role at Spartak Moscow. 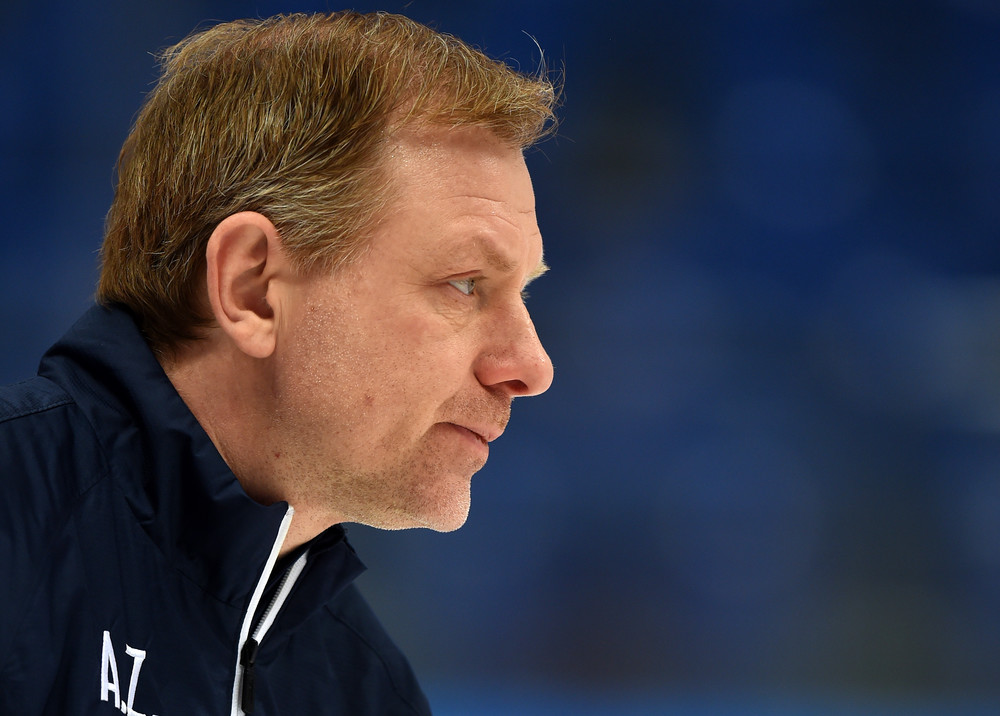 One of the oldest players on the 2002 roster, defenseman Kravchuk had won gold with Viktor Tikhonov’s USSR roster in 1988. His playing days were over before the KHL came into existence, but he has still played a role as assistant coach with two different clubs – Severstal (2014-15) and Kunlun Red Star (2017-18) 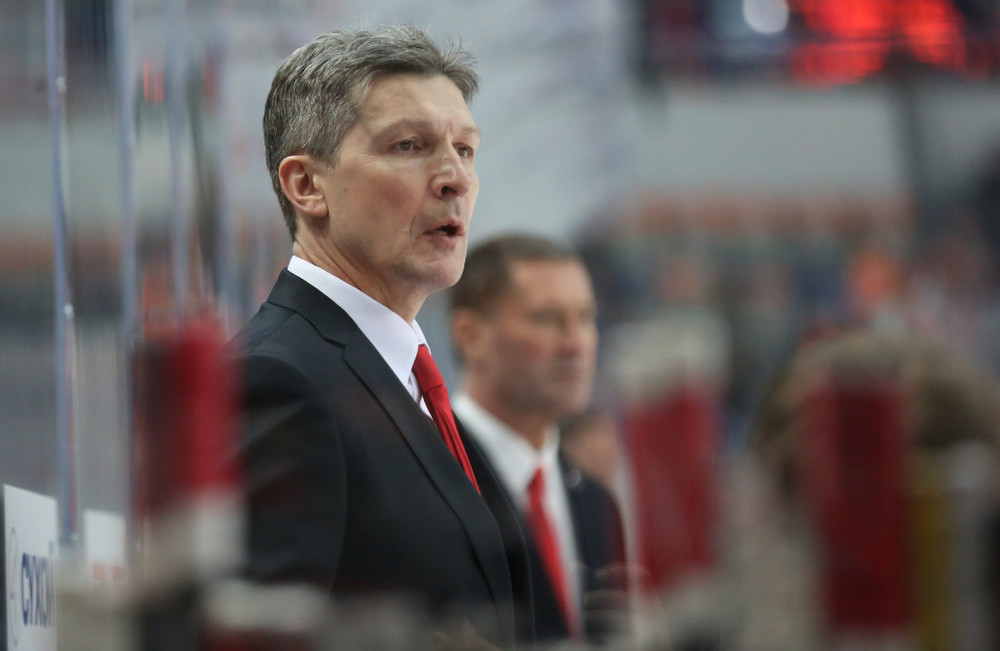