Alexander Khokhlachyov: Victory in Petersburg? I've nothing to prove to SKA

Spartak forward Alexander Khokhlachyov spoke to KHL.ru about his breakthrough season at Spartak, the Red-and-Whites' playoff chances, his first hat-trick in the League, and the Russian Olympic team.

Spartak Moscow has a real chance of competing in the KHL playoffs for the first time since 2011. Along with Severstal and crosstown rival Dynamo, Spartak is one of three teams battling for one of two remaining playoff places, and the final game of the regular season for Vadim Yepanchintsev's Red-and-Whites is a derby clash against Dynamo. In matches such as these, of course, the burden of expectation falls on the leading players, and the leading point-scorer and goal-scorer at Spartak this season is Alexander Khokhlachyov.

Khokhlachyov has made 50 appearances in the 2017-18 regular season and amassed 48 (19+29) points, currently the sixth highest total in the KHL, and last Monday the 24-year-old Russian international was named by the League as the best forward of December. And yet, just a year ago, young Khokhlachyov was just another squad player in SKA Saint Petersburg's rotation policy, receiving around 10 minutes of ice time per game. 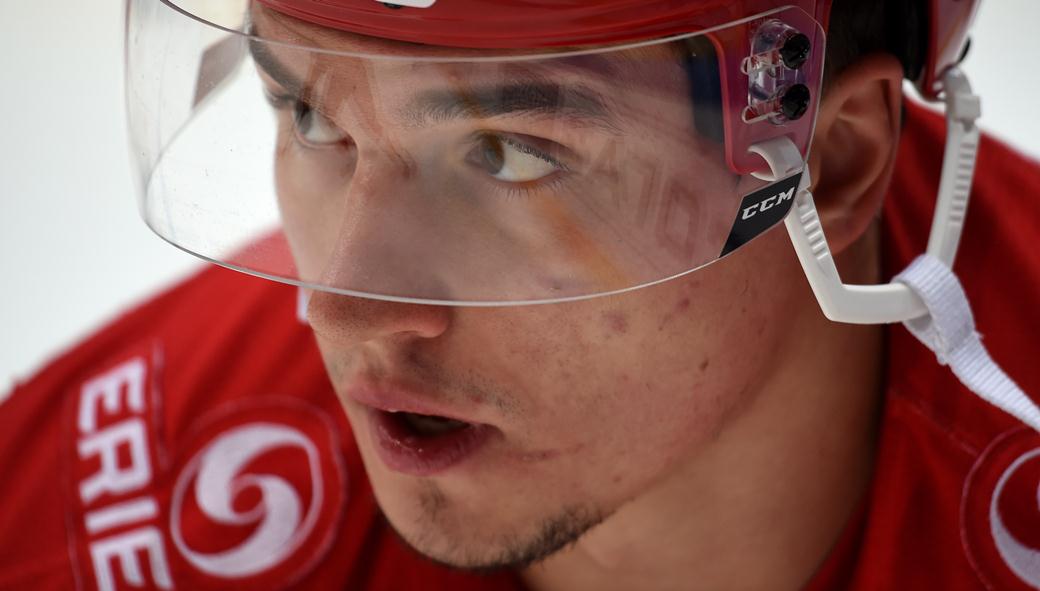 When we hit a bad spell, the players had a talk without the coaches.

- Did you expect the League to name you as Forward of the Month for January?

- Honestly, I never even thought about it. We'd had a tough month with crucial games, and we knew we had to concentrate and direct all our thoughts and efforts to producing our best hockey, so that we get a place in the playoffs.

- You didn't even look at your own statistics?

- Every player looks at his own statistics, and of course, it is pleasant to read that you have been recognized as the best forward of the month. But the main thing is not personal statistics or targets, but that the team is getting points. In some games we were fortunate, and in others the luck went against us and we lost points. But all the team played really well last month, and it's just a shame we had some injuries which disrupted us. Still, we went into the Olympic pause in good heart, and we will work some more.

- Spartak has been very inconsistent this year. There was quite a long bad patch, and then you put together an amazing run of 11 wins in 12 games. What suddenly changed?

- Nothing major. At the start we didn't play too badly, but we were lacking something. Possibly we were still getting used to one another, but we also had some wretched luck, and then things started to go right for us. In several games in our long winning streak our opponent played better than we did, but we ground out a win all the same. To some extent it is good that we had such a tricky start, as we all took a long, hard look at ourselves, thought about our game, and all of us improved.

I didn't intend to get above myself and say, “See, guys, I've scored against you!” or anything like that, but every player who is facing his former club experiences particular emotions.

- How did you snap your losing streak? Such episodes can either unite a team or trigger a hunt for the guilty.

- It brought the team closer together. All of us players had a talk amongst ourselves, without the coaches, and we all agreed that if we didn't improve then nothing good lay ahead.

- Was it a heated discussion?

- It was like a family gathering (smiles.) Everyone who had something to say had their turn, and it helped.

- Many noted that the team started playing after Alexei Zhamnov appeared on the bench. What do you have to say about it?

- Yes, there was a lot of talk like that, but I wouldn't want to go into it. What's the point? 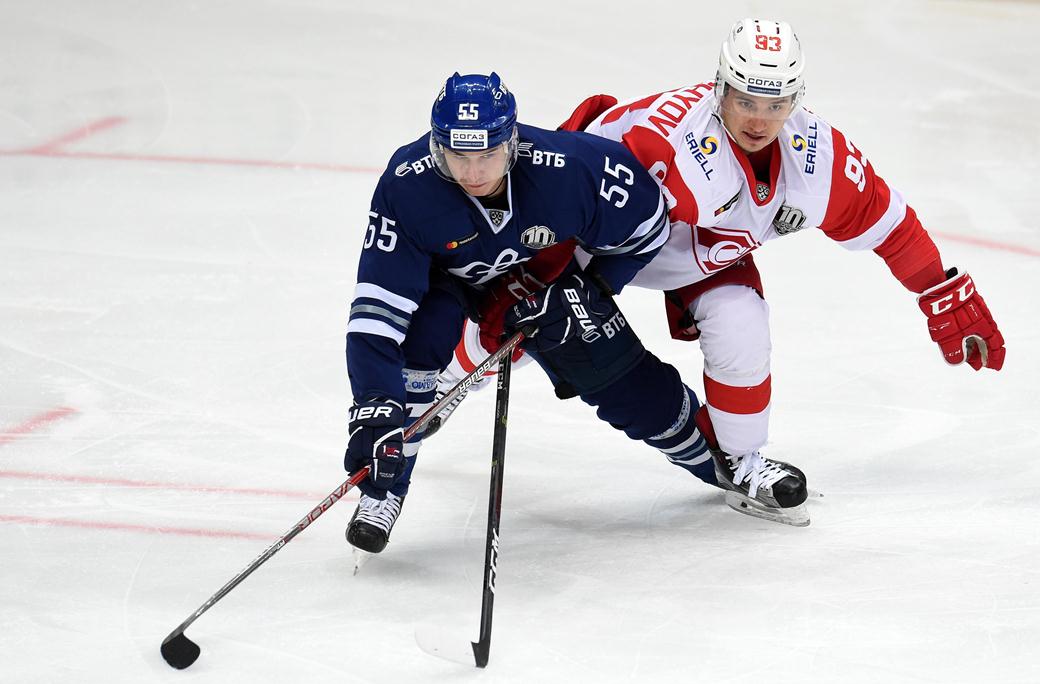 The retro-game was something new. I'd never experienced such an atmosphere at a game.

- Spartak had a chance of securing its playoff place before the break in the season, with a regulation-time win over Severstal, but it didn't happen. What went wrong?

- The Cherepovets guys are in the situation as we are, and like us they were battling to the last. Maybe fortune favored them, or maybe we ran out of gas a little. We were leading 3-2 in the third period and couldn't quite hang on.

- You scored a hat-trick in that game. Is that your best game of the season so far?

- No, I wouldn't say it was my best match, although, if we had won, I probably would agree with you. It's just nice to score three goals.

- How does a player feel when he scores a hat-trick but his team loses?

- Mixed feelings. Everyone loves to score, so of course I was happy with that, and I've yet to meet a hockey player who doesn't take pleasure from his goals (smiles,) but looking at photos of the game I don't seem to be showing any emotion. The game turned out to be a tough one, energy-sapping and draining, so any emotions left are deep inside. We lost to Severstal and HC Sochi, but it's not a disaster. Everything is in our hands.

To some extent it is good that we had such a tricky start, as we all took a long, hard look at ourselves, thought about our game, and all of us improved.

- Did you collect and keep the hats thrown onto the ice in tribute to your hat-trick?

- Yes! There were so many caps, hats... It's great that Spartak has so many fans who go to the stadium and give us such great support, and we try our best to please them. As for the caps – I gave some away to children, and as is the tradition, I kept one – the one I liked the most – for myself.

- At every team in which I've played, that is what happens. A player scores a hat-trick, they bring the hats to the locker room, and the player must choose one to keep as a memento.

- Spartak this year staged another retro-game. What do you think of these?

- Awesome! I really like them! It's such a special occasion for the fans, and the game went very well for us too, so it all went very smoothly. The atmosphere in the stands was unbelievable. For me it was something new. I'd never experienced such an atmosphere at a hockey game, I remember we were pictured in the retro-bus taking us to the game. What can I say? Our modern-day bus is better (laughs.) 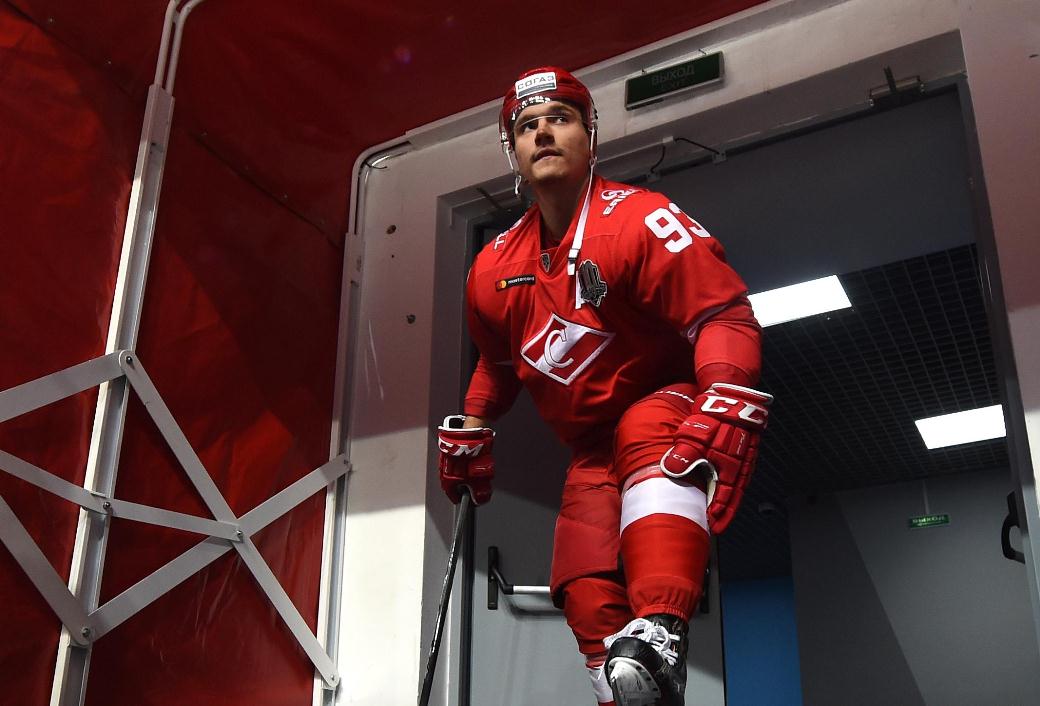 I didn't intend to get above myself against SKA and say, “See, guys, I've scored against you!” or anything like that.

- Spartak defeated SKA in Petersburg at the beginning of November. You must have felt strong emotions stepping out onto the ice, and especially scoring the opening goal.

- Of course I did. I wanted to go to Petersburg and play to my best. Few people gave us any chance, but we managed to get a victory, and it is a great achievement to beat SKA on their home ice. By the way, Petersburg is a good place to play, and the fans gave me a warm reception.

- Did you feel you had a point to prove in this match?

- No, I didn't intend to get above myself and say, “See, guys, I've scored against you!” or anything like that, but every player who is facing his former club experiences particular emotions. You're playing against friends whom you know well, so it's exciting, but I certainly had nothing to prove. A year has passed since I left; it's a new season; I'm at a different club.

- In one of your interviews last summer you said something along the lines of: “I have returned to Spartak and I hope the Russian national team will hear of me soon.” Now you are the top scorer at your club and the third highest scorer among Russian players. Did Team Russia listen?

- That's not for me to answer (smiles.) As for my performances, then this season I have played better than in the last one, but it's hard to draw any major conclusions because the season is far from over.

Our game against the Russian Olympic team is more important to them, and we are just a sparring partner. The main thing is that no-one picks up any injuries.

- How can you explain your sudden burst of good form?

- Honestly, nothing major changed in my life. It was just a combination of circumstances – I returned to my home club, and everything went really well.

- What did you learn in your spells in the NHL and AHL?

- The biggest thing I learned was everything can change in one day. You can be a hero, and in great form, but it means abslutely nothing. Everything could change in your next game. That's why you just have to work hard. It's not great when one day they select you for the main roster and you get five minutes of ice time, and the following day they send you to the farm club. But I learned to focus on the immediate future and not to dwell on past misfortunes.

- Do you harbor ambitions to return to North America?

- I get asked this a lot, and if the choice were put in front of me it would be a tough call. I'll make a decision in the summer, after the season is over. But I definitely do not regret for a moment that I returned to Russia and signed the contract with SKA. It's well known that I wanted more time on the ice, but I still learned a lot from the guys in Petersburg and I made many new friends. We won the Gagarin Cup! Everything was great. 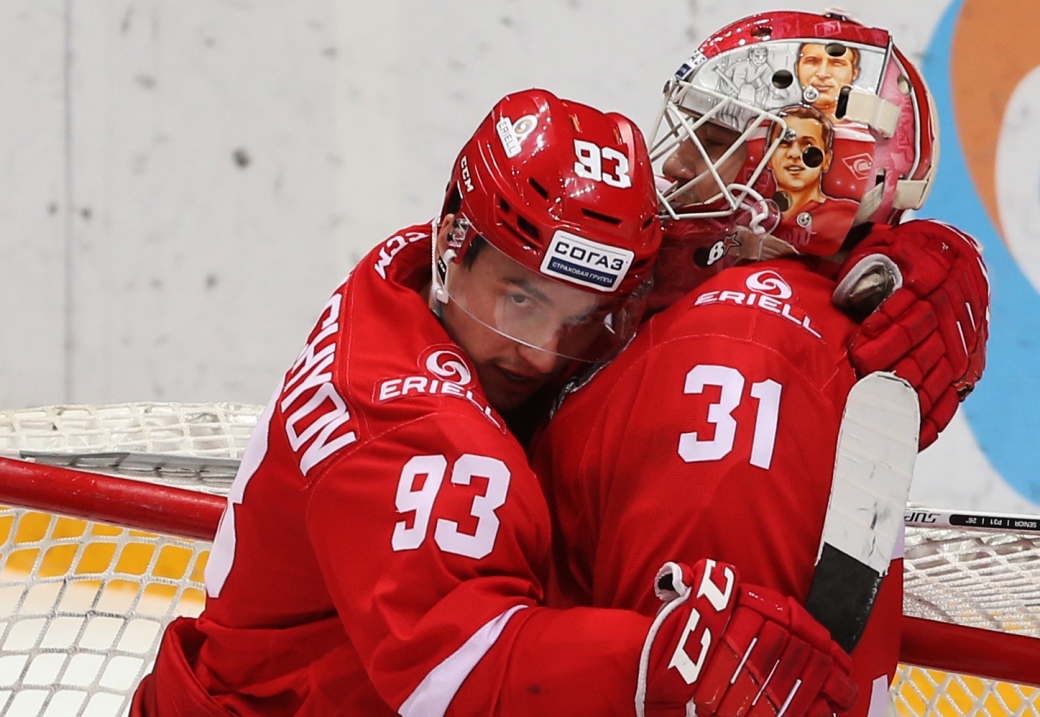 If we get to the playoffs, we can play freely, with no pressure.

- Are you hoping to avoid SKA in the first round of the playoffs?

- I would like to, yes (smiles.) It is not the ideal opponent for the first round. But first we need to secure our place in the top eight, and only then should we talk about possible opponents.

- If Spartak does reach the playoffs, the Conference quarter-final could only be against SKA or CSKA. Few would give the Red-and-Whites a chance regardless of which one you face.

- That would just motivate us even more and bring us closer together. It will be easier for us to play when everyone has written us off. They will say the favorites have beaten us even before we step out onto the ice, and we can play with freedom, without fear, and under no pressure. And if every one of us plays to his full potential, then we have a chance.

- What did you do in the free days before resuming training during the Olympic break?

- I went to Dubai. I managed to relax a little and recharge my batteries.

You can be a hero and in great form, but it means abslutely nothing. Everything could change in your next game. That's why you just have to work hard.

- On Sunday, February 4, Spartak will play a friendly match against the Russian Olympic team. What do you expect from this game?

- We all realise the kind of players we'll be up against. The game is more important to them. We are just a sparring partner, and the main thing is that everyone avoids picking up any injuries. Of course, no-one has ordered us to not stray within a yard of Kovalchuk and Datsyuk, or not to touch Shestyorkin (smiles), but none of us was born yesterday and we understand fully our role in this match.

- Will you not feel a little sad? Wouldn't you rather be on the other team, wearing the Russia jersey?

- It's no secret that every player, regardless of where he is from, wants to play for his country. I'm no exception. 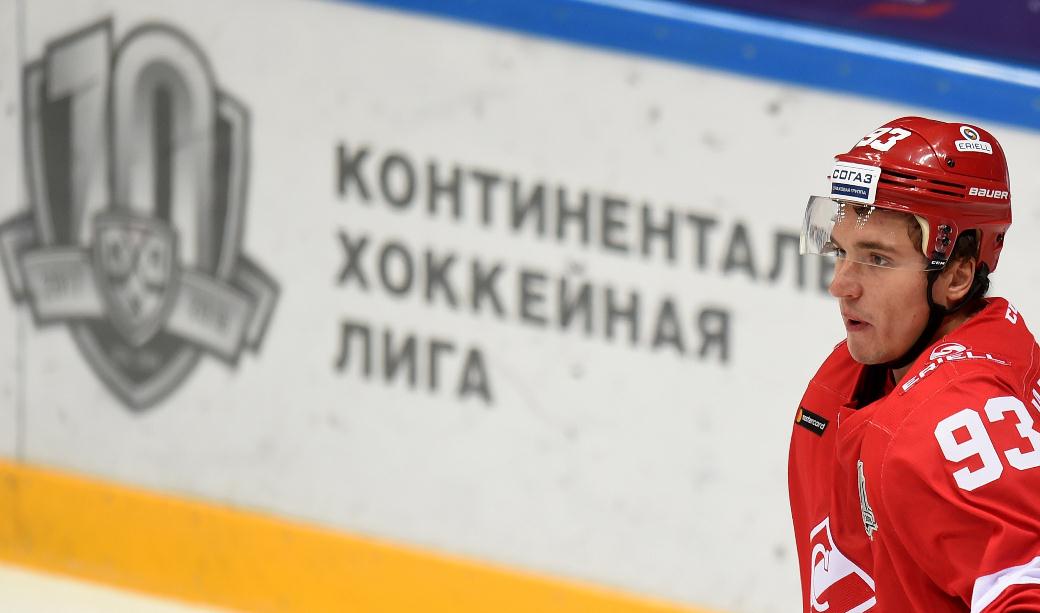