SKA smashed a host of KHL records, Jokerit unleashed a teenage scoring sensation, and Alexander Khokhlachyov emerged as Spartak's leader, while in Minsk, Bratislava and Riga not everything went to plan. With just a coupe of games remaining before the end of the regular season, KHL.ru looks at the mixed fortunes of the teams in the Bobrov Division, four of whom took part this year in two historic regular season games under open skies.

The Petersburg Army Men have set a great many new records already in this 10th anniversary Championship, and many of them are likely to stand for some time. Oleg Znarok's men hit the ground running at the start of the campaign, winning their first 20 matches, and also set a new record for percentage of points earned in the regular season, and for the second time in history have clinched the Tikhonov Trophy as regular season champion with several games to spare.

As if the best ever start by a team to a KHL campaign was not intimidating enough, halfway through the season the ranks were further strengthened by the return of danger men Vadim Shipachyov and Patrick Thoresen, while Nikita Gusev and Ilya Kovalchuk were fiercely duelling for the top-scorer spot. No fewer than 19 players from SKA will be competing at the Olympics, and 15 of these will be representing Russia. One cannot but sympathise with the team which will begin its post-season by facing the reigning champion in the Western Conference quarter-final series. 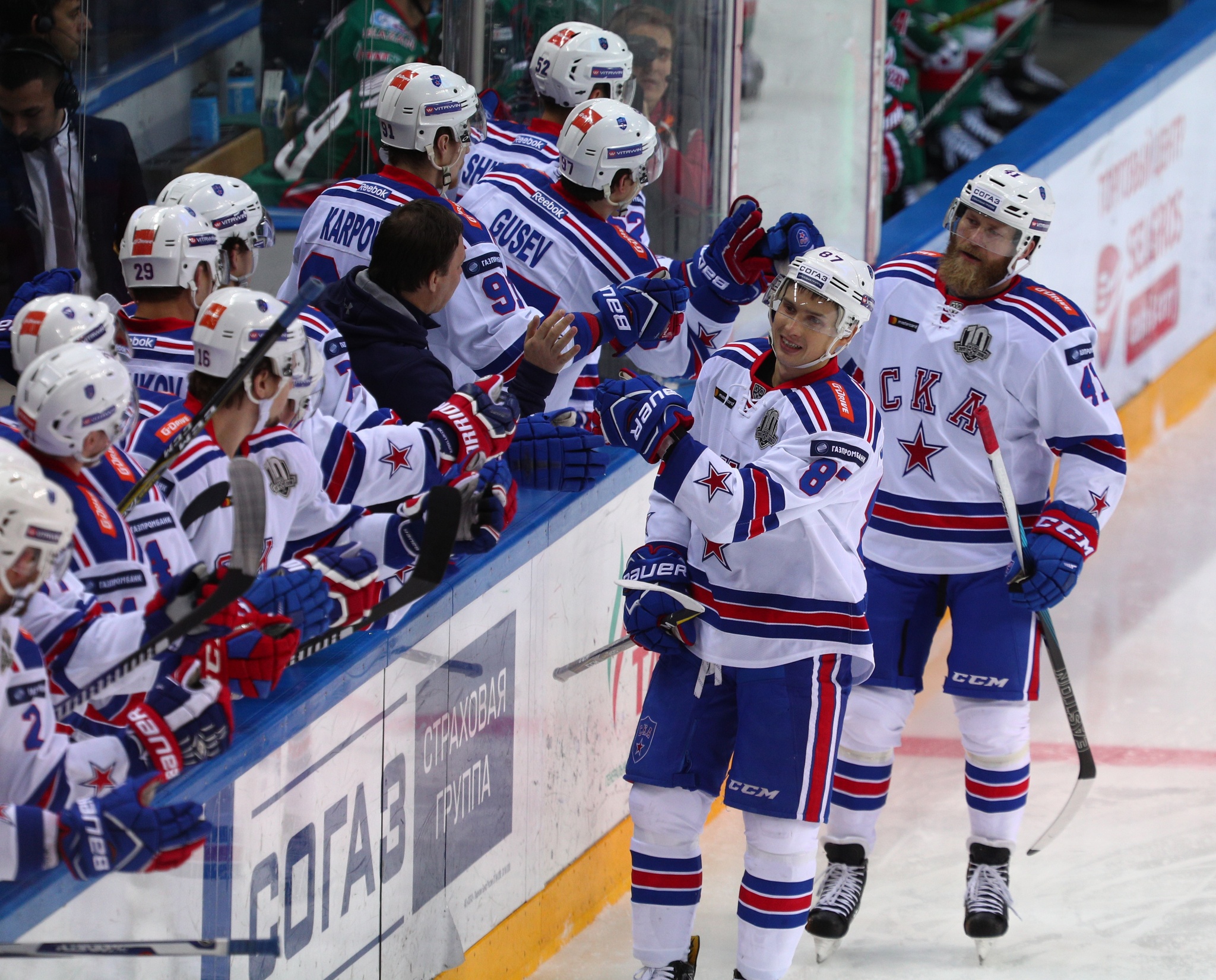 The Finnish club certainly learned from its mistakes and was unrecognisable from the cautious outfit which sank without trace last season. As summer turned to fall, the Helsinki team put together a club record of 15 successive victories, and provided the League's unexpected but undisputed star of the first few months of the Championship. 18-year-old forward Eeli Tolvanen captured the Rookie of the Week award five times, was Rookie of the Month for October, and broke Evgeny Kuznetsov's record for KHL points scored by a player under 19.

As winter approached, a flurry of injuries took the wind out of the team's sails, and while Jukka Jalonen's men are probably secure in third place, they face the prospect of a Conference quarter-final against HC Sochi, who had the upper hand over Jokerit at the Bolshoy Ice Dome and in Helsinki. But by then the team could well be at full strength, and the Finns are a formidable prospect. They are also celebrating their 50th anniversary season, an occasion they marked at the start of December with the KHL's first ever open-air regular season game. The opponent was the champion, SKA, and the attendance was a new League record of 17,645. 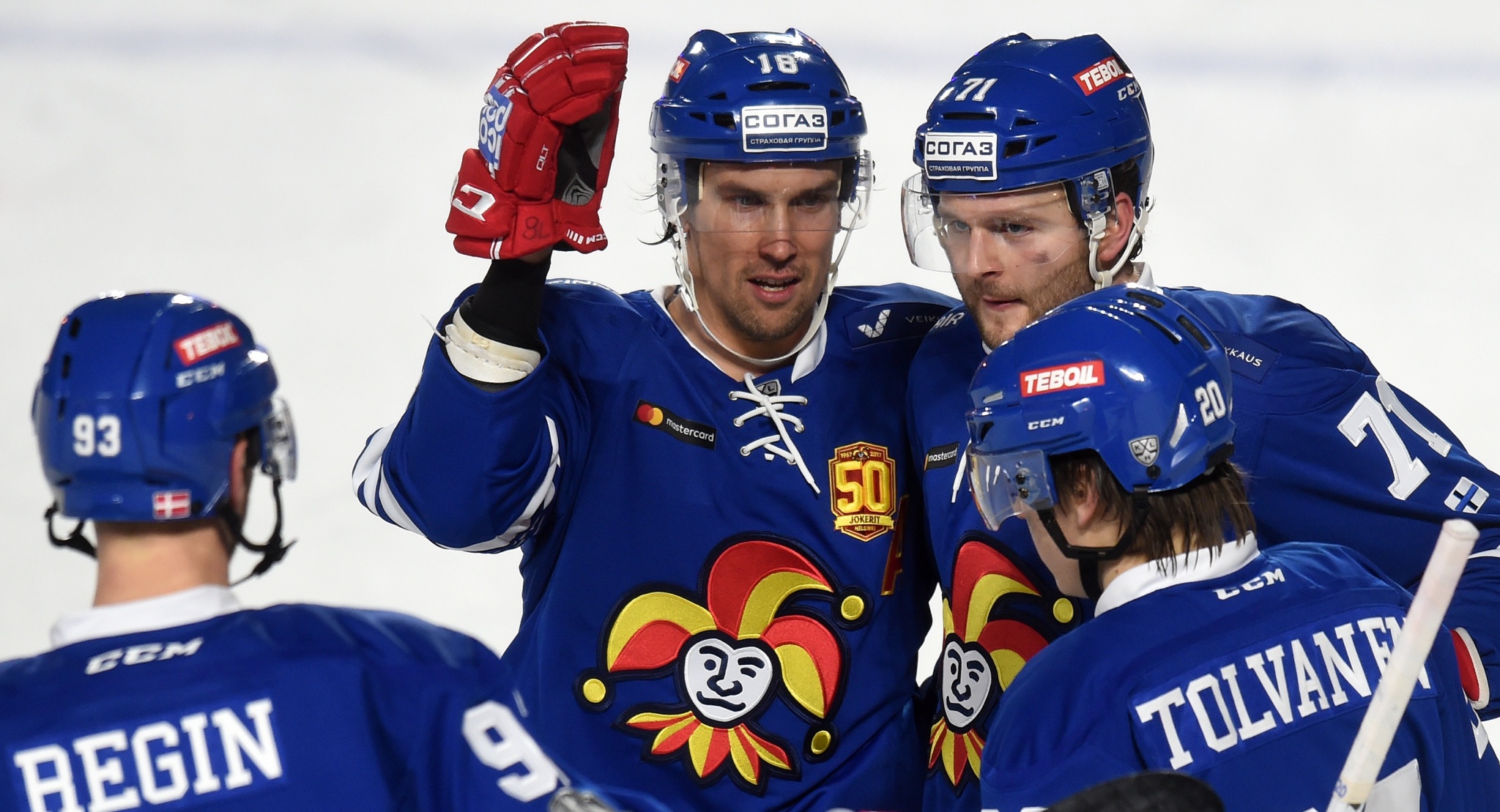 The Muscovite Red-and-Whites have been one of the revelations of the season. Vadim Yepanchintsev's team had a quiet start, but gradually became almost invincible at home, and this has propelled them into 7th place in the standings. Leading the way was a graduate of the Spartak school, Alexander Khokhlachyov, who returned from Saint Petersburg during the summer and found his true form at his native club. Now he goes into the Olympic break as the League's 6th-highest scorer.

The regular season ends for the gladiators with duels against Lokomotiv and Dynamo Moscow, and just a single point will be enough to secure Spartak its first playoff appearance since the 2010-11 season. And even this might not be necessary – the Red-and-Whites could emerge pointless from both games but still book a playoff berth if CSKA and SKA can avoid defeat against Severstal. 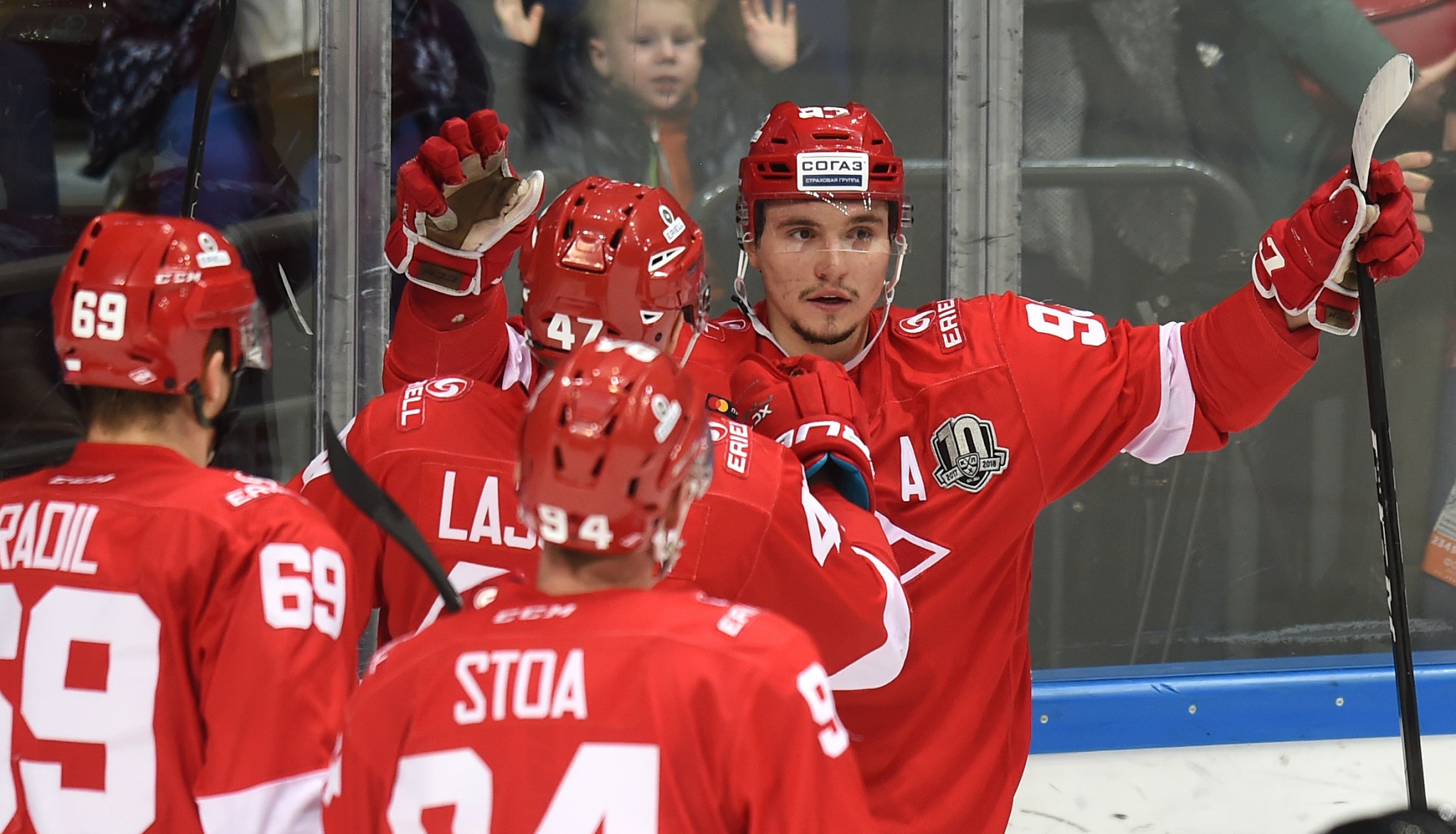 Last summer Minsk appointed a new man at the helm: Canadian Gordie Dwyer, who had previously been in charge at Medvescak. The new coach saw his men lose thir first six games of the season, but then managed to steady the ship. After the unfortunate beginning, the team gradually began to produce some fine hockey and rose accordingly in the standings. Having kept the intrigue alive for most of the season, however, the Minsk Men's defeat at the hands of Admiral finally removed any hope of a playoff place with just a few days remaining before the Olympic break.

No-one likes a team which is predicatable, of course, but what plagued Dinamo Minsk in this campaign was a maddening inconsistency – the team emerged victorious twice against champion SKA, took points against CSKA, and would then lose to Vityaz, Admiral or Kunlun Red Star. When the regular season resumes after the Olympics, the Belarusians' season ends with games against fellow strugglers Slovan and Dinamo Riga. 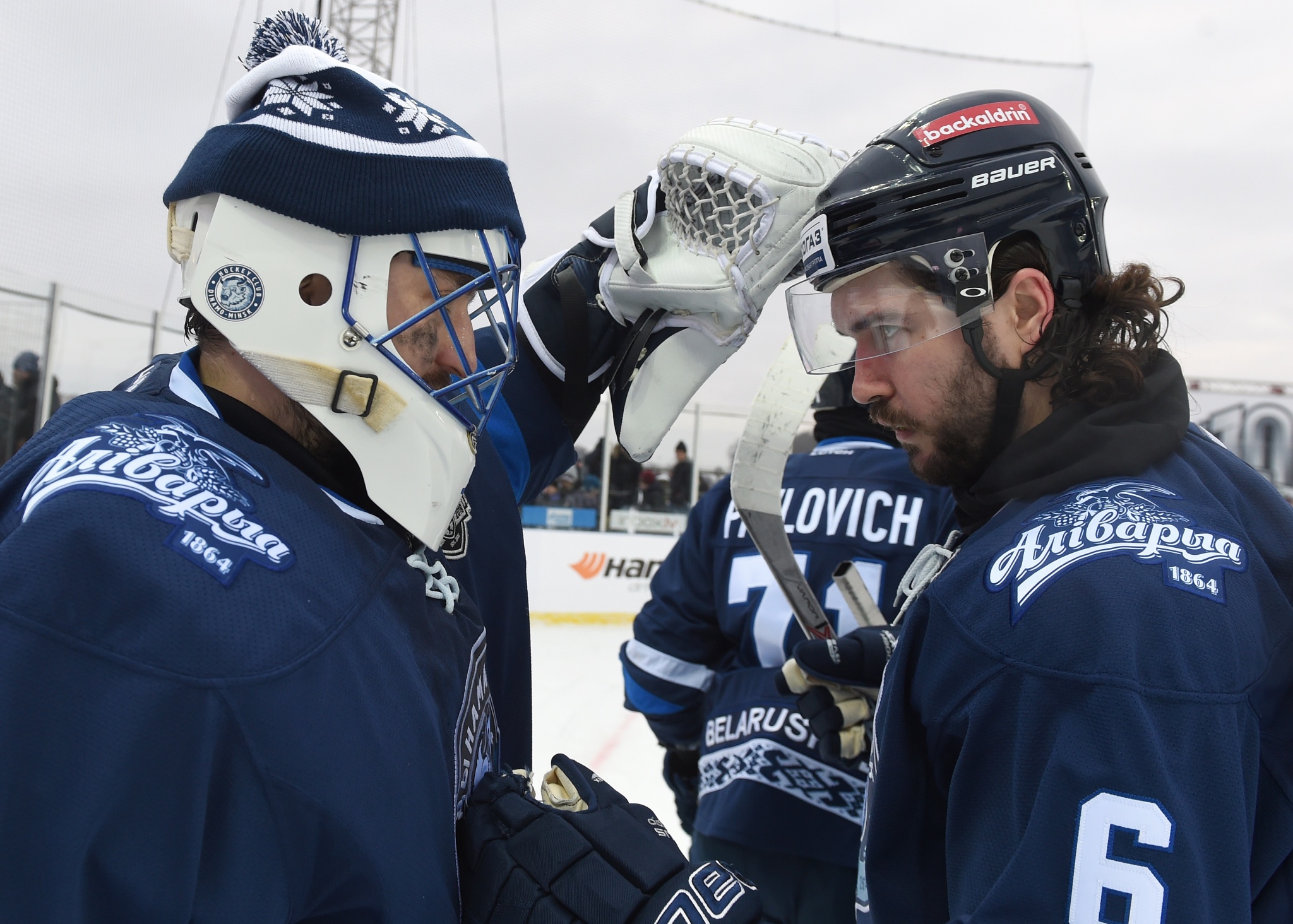 The boys from Bratislava endured another disappointing season. The club has a notoriously tight budget, and not even the experience and charisma of coach Milos Riha could get the team punching above its weight. The club and Riha parted company at the beginning of October, and in came Belarusian specialist Eduard Zankovets.

The new boss could not work miracles, of course, but at least the new calendar year brought a couple of memorable results as Slovan achieved victories over both Metallurg Magnitogorsk and Ak Bars. Those were the only highlights, however. The team long ago lost any mathematical chance of making it to the knockout stage, and now Michal Repik and Juraj Mikus have moved on to new European pastures so that they can prolong their season. 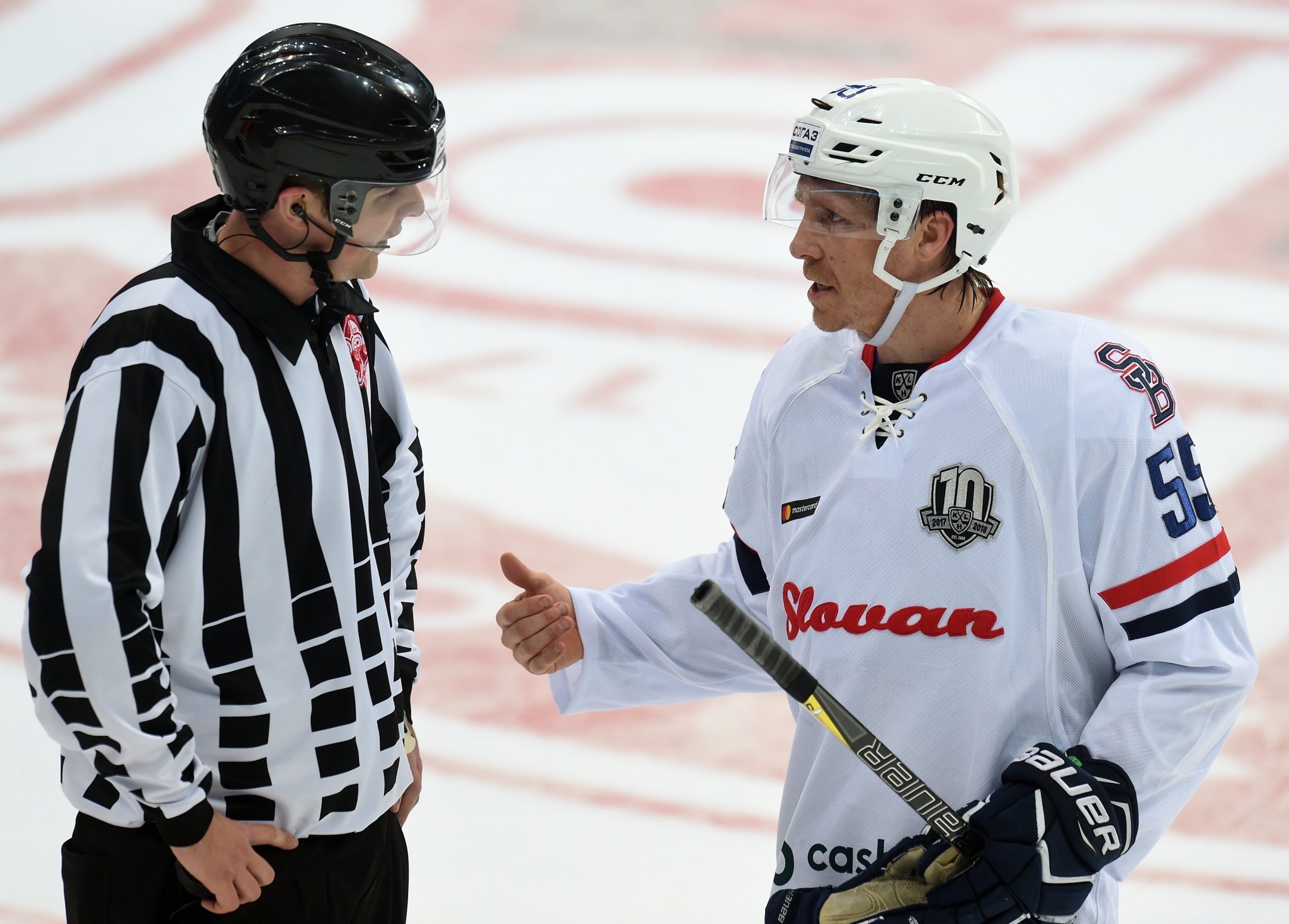 All at Dinamo, fans and staff alike, buzzed with optimism and anticipation before the start of the Championship, eager to see how the team would play under the new head coach: hockey legend and national hero Sandis Ozolins. A harsh lesson in reality awaited them. The team began by taking 5 points from a possible 12 on their first road trip, and then lost 14 games in a row. Ozolins fell on his sword and his place on the bench was taken by Girts Ankipans.

Dinamo certainly improved under new management, and the points began to come, but it was a case of too little, too late. The team could not win enough games to wipe out that disastrous start to the season, and another slump in form this month killed off any chance of a happy ending. There is still good reason for the optimism to return, albeit for next season. The coaching staff looks set to remain, and all that is needed are a few foreign players to flesh out the Latvian spine of the team. And of course, the Riga Men can take pride in a successful staging of the second open-air game in KHL history, although it was their guests and rivals from Minsk who celebrated victory under the open skies. 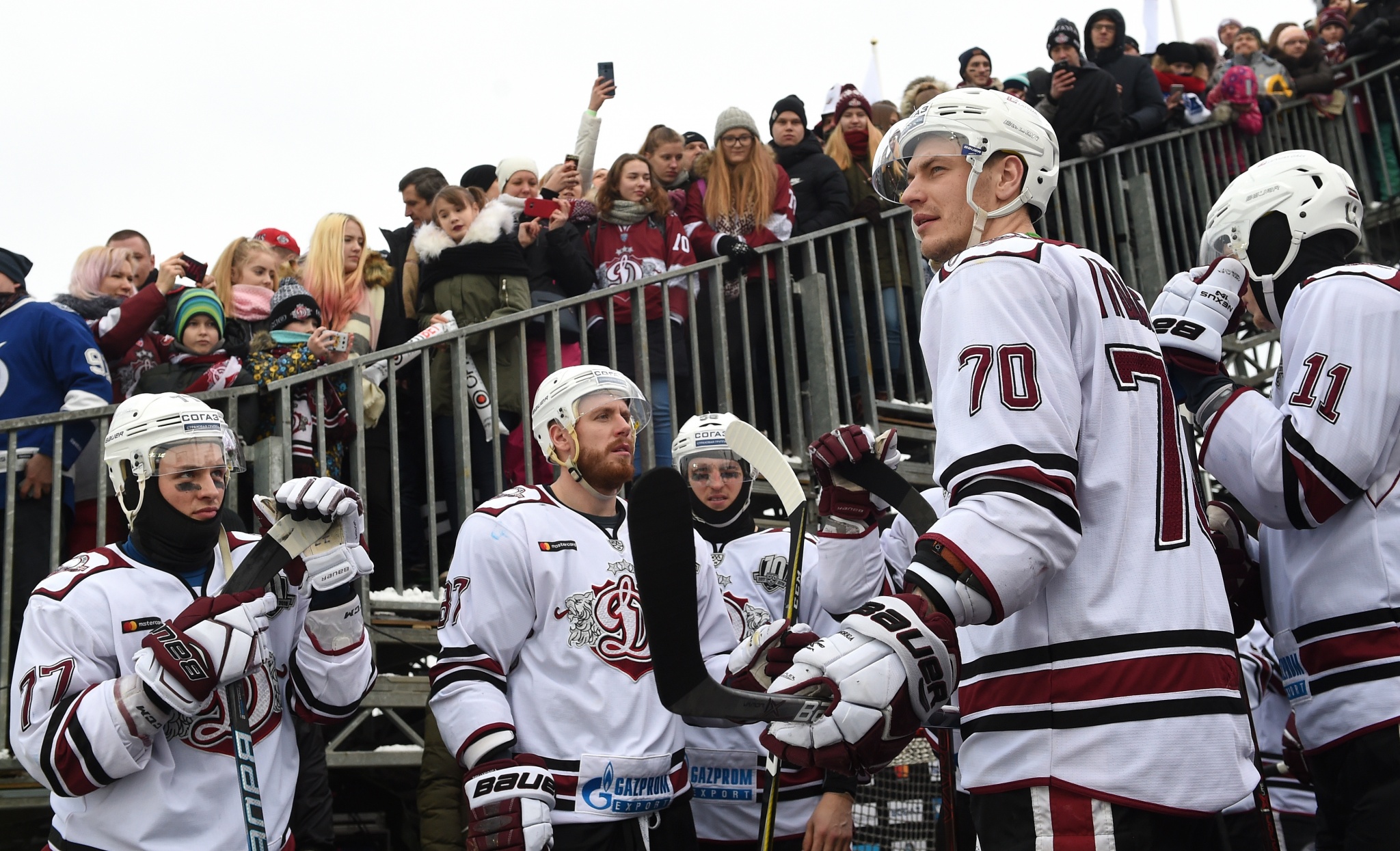 - Of the remaining matches, the battle for third place between Jokerit and Lokomotiv is the highlight. The Finns have to play SKA and Dinamo Riga, and for the Latvians that might be just a damage limitation exercise. Lokomotiv must face Spartak and CSKA, but they could still overtake the Helsinki guys and grab third spot. A lot will depend on how the teams spend the Olympic break.

As for Spartak, the whole team knows that one point from the last two games will be enough to bring them their first playoff appearance in seven years. I'm confident that Vadim Yepanchintsev and his staff will make sure the players take this small but significant step, and that the head coach will still be in the job next season. Finally, the Bobrov Division has one of the most intriguing of all the games left in the regular season – the Spartak-Dynamo derby - and that match could decide the fate of both teams.