On Sunday, the Week of Hockey Stars in Astana, Kazakhstan, reached its climax with the final of the All-Star Game mini-tournament, bringing down the curtain on a highly successful five days of festivities. On this page, after the live broadcasts and stunning photographs, we at khl.ru present many of the key facts and figures which go a long way to illustrating the scale of the event – the biggest hockey show of the season.

100 volunteers, 20 tons of cargo and averaged 4 hours of sleep a night.

A total of 4,280 accreditations were issued, which included 3,612m of ribbons – enough to stretch from the Bayterek Monument to the Nur-Astana Mosque and back again.

39 cars, vans and buses used up 1,146 liters of gasoline to carry the players, guests and employees, covering more than 7,600km, or the distance from Astana to Vladivostok!

That 20 tons of cargo, mentioned above, occupied 2,000 square metres of warehouse space.

450 emails were written by employees, and around 300GB of data was sent for every day of the Week of Hockey Stars. No fewer than 153 broadcasting channels were on duty at the Barys Arena.

The average temperature at street level was -21C.

Keeping order on the ice were 13 officials, including 4 women who refereed both the WHL All-Star Game and the KHL Master Show.

The 8 teams were led by a total of 16 coaches, including the 4 women TV presenters working as assistant coaches in the the KHL Master Show and KHL All-Star Game, and the athletes were backed by 10 service staff – doctors, massage therapists and volunteers.

In the locker room areas, the players were provided with sandwiches, pizzas, burgers, nutritional bars and fruit, and together they consumed more than 120,000 calories and over 2,000 liters of water. 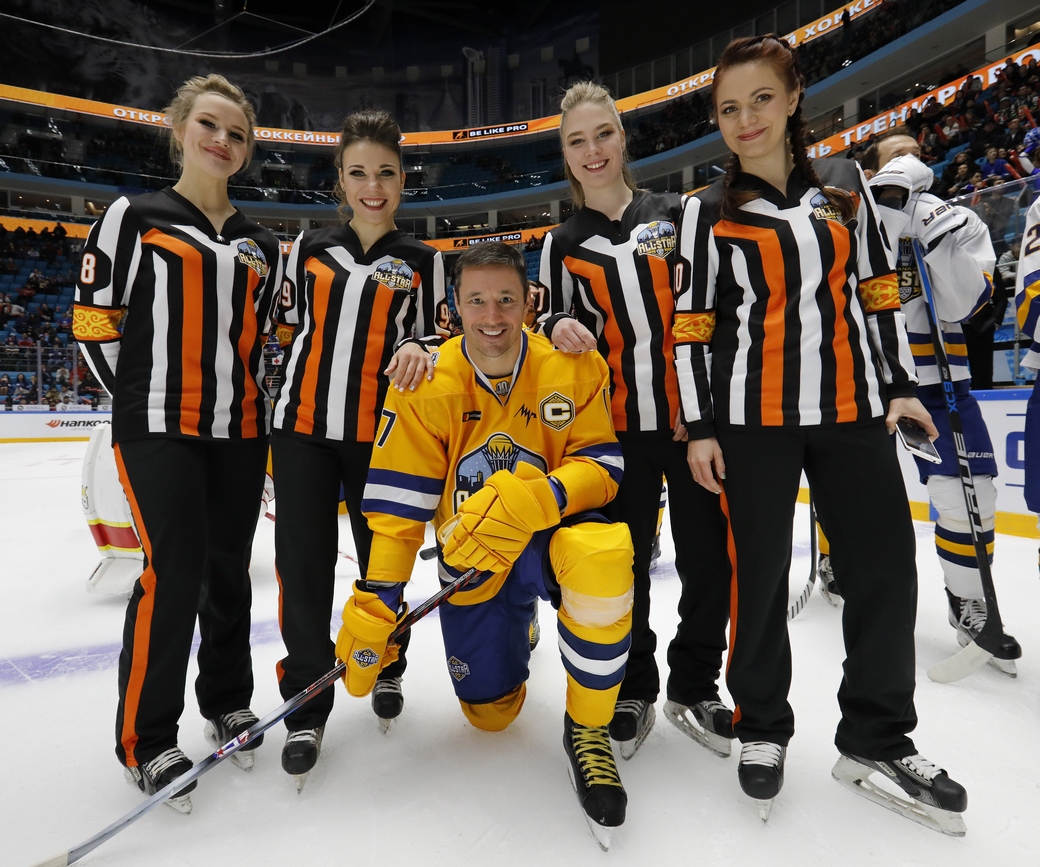 The audience was shown four pre- match shows, one before each major event and all with a cosmic theme.

The total duration of the show was 24 minutes, and featured three cosmonauts, 12 drummers, 11 women from the awards group, 40 players representing the YHL and WHL clubs, and one 10-year-old fan - the same age as the KHL.

The participants went through 3,000 hours of practice for the ceremonies, enough to make one rehearsal continue for 125 days.

The show needed 30 projectors, 250 lighting rigs, 7 laser systems, 4 cryojets and 40KW of sound, plus 150 specially made LED lamps for the Master Show.

Over the four competition days, the Barys Arena was visited by more than 25,000 spectators. Ticket holders went through 3 entrances, sharing 22 turnstiles and 48 doors.

More than 15,000 spectators visited the Shooting Game in the arena fan zone, scoring more than 2,000 goals. 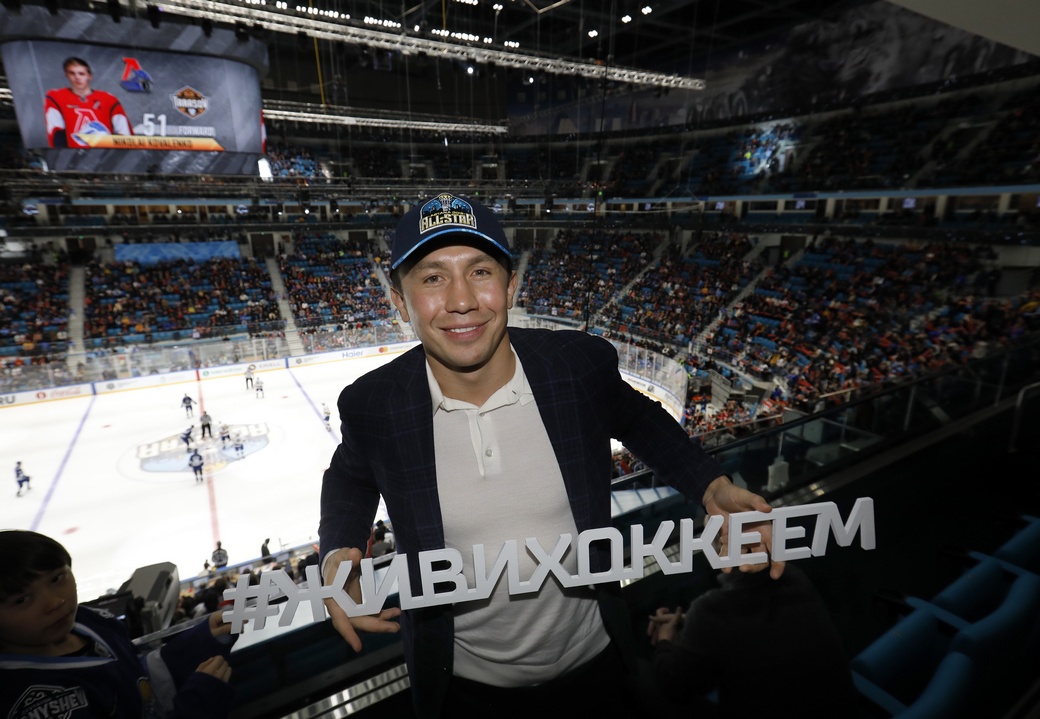 At the Mastercard stand, the lines of visitors stretched to 15 metres each day, doubling to 30 metres at the weekend. A total of 440 people registered for the joint KHL-Mastercard events, and over 300 people recorded their video requests to the players in the Priceless Fan contest, the winner of which, Anastasia Putintseva, collected her prize on the Barys Arena ice during a break in the All-Star Game, presented by her favorite player, Nigel Dawes.

The "Smile of a Hockey Player" promotion, where fans could be photographed and create an image in which their face wears any hockey mask of their choice, attracted 371 customers. In all the Mastercard stand offered around 1,500 Priceless prizes, and over 1,000 people donned special glasses for a virtual reality experience in which they paraded a trophy with a hockey player in front of thousands of fans.

Around 1,000 people visited the Bauer photo zone. In the Bauer showroom, located in the players' zone, 35 potential customers tested the new Bauer super-light hockey sticks and there 63 scans of legs using the unique Bauer scanner, which determines the correct model and size of skates.

The merchandising company Luch, sold more than 200 cases of licensed products, including 3,000 pucks and 3,000 caps. 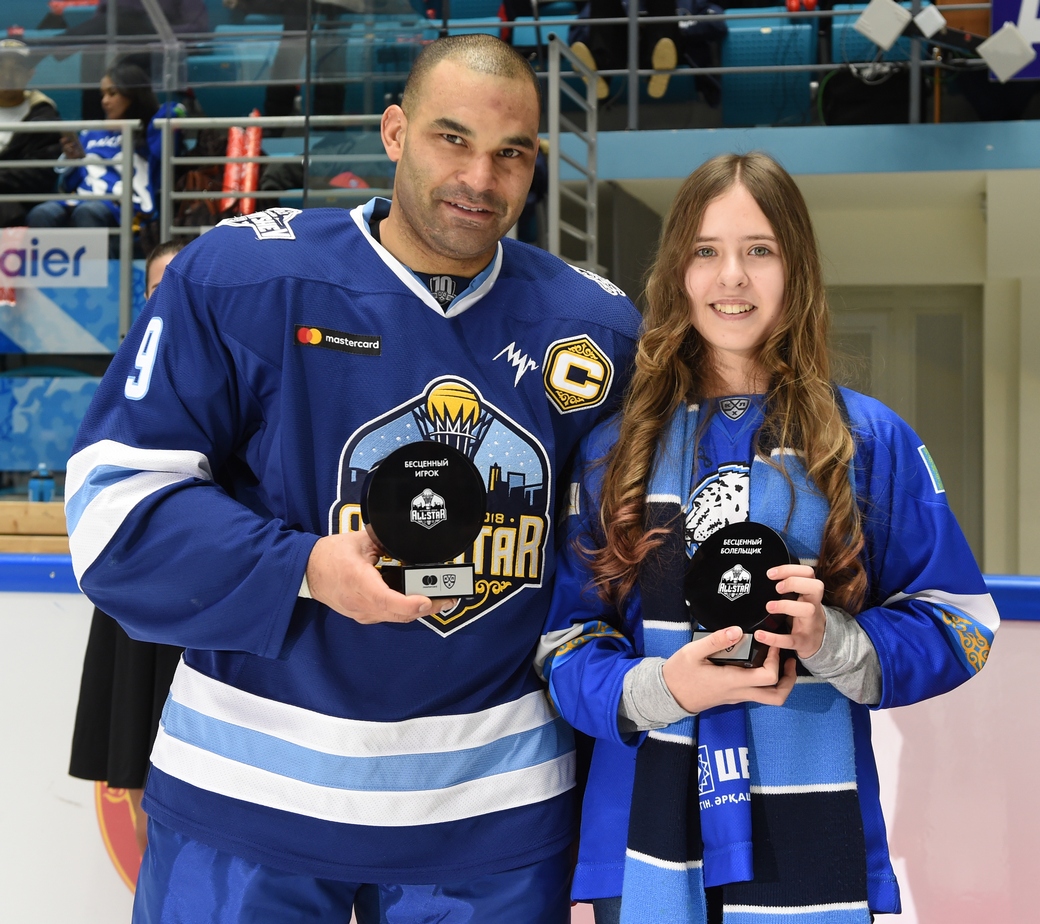 Live broadcast of the WHL All-Star Game on Vkontakte scored more than 630,000 views, including more than 120,000 each for the dance routines by the players of East and West.

Some viewing figures from social media: on Vkontakte, YHL Challenge Cup attracted 540,000+ views, while on the KHL Youtube channel, the KHL Master Show yielded 62,000 views; including 27,000 for the Shootout, of which 22,000 watched Nigel Dawes's attempt.

The only thing that cannot be measured in numbers is the boundless joy and priceless memories which will remain with fans, participants, staff and viewers of this hugely successful 2018 Week of Hockey Stars.