The 2013-14 campaign was a good one for Canadians in Russia. In February, their national team repeated its Olympic gold medal, seeing off Sweden in the final to wrap up two weeks of clinical hockey. Then, in April, Mike Keenan, Ontario born, made history as the first North American coach to win the top prize in Russian hockey. The international flavour didn’t stop with Canada: Lev Prague was the first team from outside of Russia to reach the Gagarin Cup final before falling to Keenan’s Metallurg Magnitogorsk.

Two further teams joined the KHL, stretching the league’s geography in both directions. Out in the Far East, Admiral Vladivostok brought the competition to the shores of the Pacific, while in Zagreb, Medvescak made Croatia the eighth country to be a part of the project. 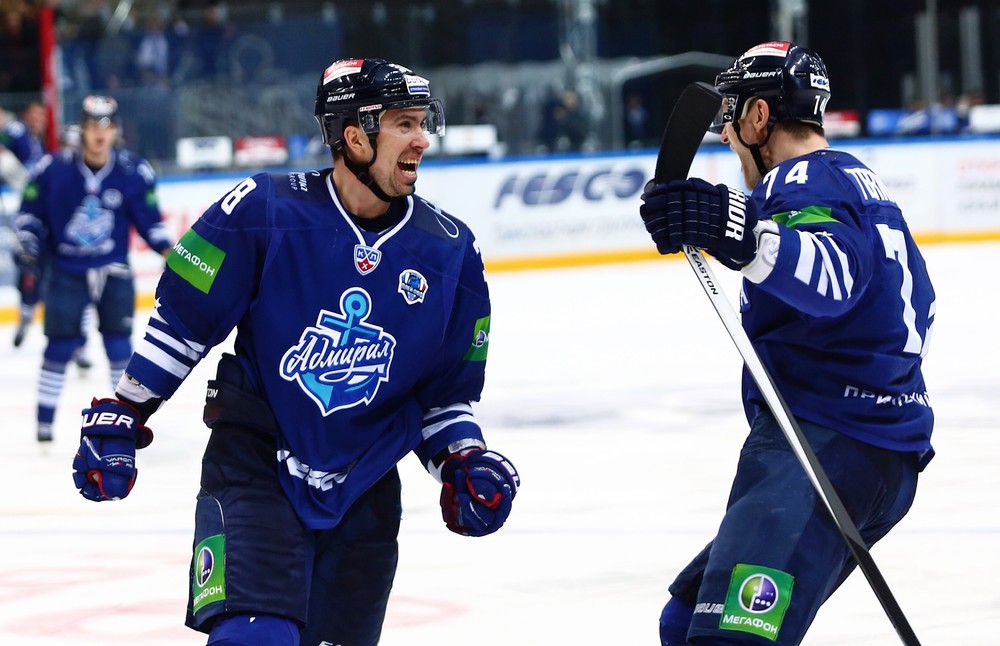 The pre-season was all about Iron Mike Keenan, a veteran coach whose experience and track record promised to bring something big to the KHL. After taking over at Metallurg Magnitogorsk, there was great excitement at the prospect of a Stanley Cup-winning mastermind pitting his wits against the cream of European coaching.

On the playing side, Ilya Kovalchuk’s move to SKA was the attention-grabbing trade. Kovi had feature in Petersburg during the previous season’s lock-out, and clearly enjoyed the experience. At the age of 30, with 12 years remaining on a blockbuster of a contract with the Devils, he opted to quit the NHL and return to Russia with his family. SKA eagerly signed up the star forward once again. 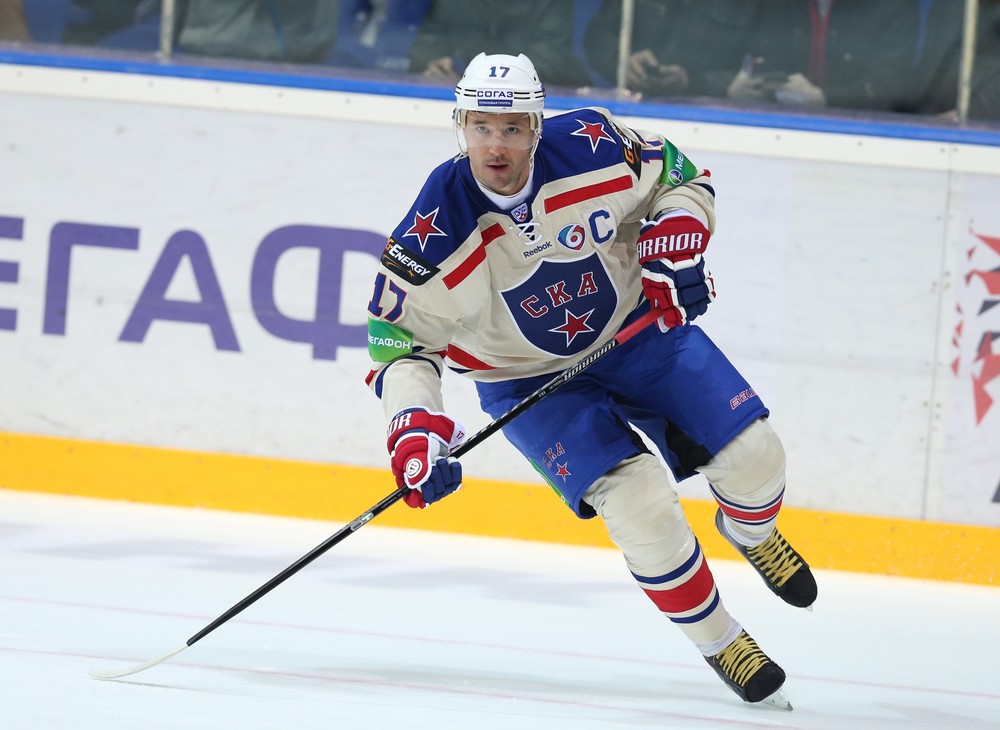 Russia was ready to celebrate an Olympic festival in Sochi, and hopes were high that the hockey team would be back among the medals for the first time since 2002. There was also interest in how Latvia, once again punching above its weight on the international stage, would perform, while Finland brought nine KHLers to the Games.

In the event, Russia was frustrating again. Despite a roster stacked with offensive options, the team’s production never really caught light. A 1-3 loss in the Quarter Final against Finland left a nation disappointed. Latvia had a more encouraging time, winning through to the last eight with a victory over Switzerland, then pushing Canada all the way before succumbing 1-2. The Canadians went on to went a second successive gold, Finland took bronze, Jarkko Immonen became the first player to win two Olympic medals while playing in the KHL.

Russia’s defeat spelled the end of Zinetula Bilyaletdinov’s spell as head coach, and he returned to Kazan as GM at Ak Bars for the final weeks of the season. Oleg Znarok was persuaded to leave Dynamo and take charge of the national team, making a successful debut at the World Championship in Minsk with a gold-medal display. 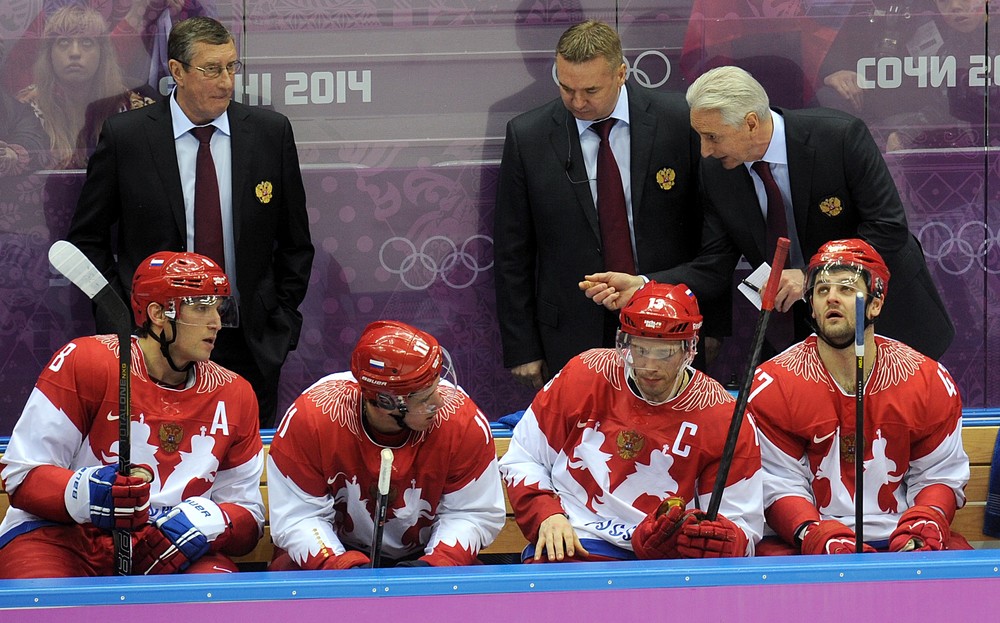 After Dynamo won the Opening Cup against Traktor, the most interesting result of the early games came in Zagreb. Medvescak, new to the competition, enjoyed a spectacular opening night with a crushing 7-1 victory over CSKA. That set the tone for an encouraging debut season, with the Croatians making the playoffs at the first attempt, finishing ahead of CSKA and Lokomotiv. Strong scoring from Jonathan Cheechoo and Matt Murley led the Medvescak charge, while the enthusiastic fans at Zagreb’s Dom Sportova produced a lively game-day atmosphere.

Admiral also performed well in its rookie year, taking the eighth and final playoff spot in the East. Under the guidance of Hannu Jortika, the only coach to take Amur to the KHL playoffs, the team was always competitive, coping with the demands of some serious travel. German international Felix Schutz, signed from Kolner Haie, and Swede Niklas Bergfors were the key scorers for the expansion team.

The battle for honors involved most of the usual suspects in the regular season. Dynamo topped the table as Oleg Znarok continued to set the standard among coaches. SKA was the closest challenger in the West, while Keenan’s Magnitka came out on top on the East. This was the season when the Mozyakin-Kovar-Zaripov troika was unleashed for the first time, and the three players topped the scoring charts with a combined tally of 205 points. Barys edged Salavat Yulaev to the Chernyshev Division title, with Brandon Bochenski leading a powerful line of his own, supported by Dustin Boyd and Nigel Dawes. Ak Bars also performed strongly, but there was a surprise as Avangard failed to reach the playoffs. Victory in the short-lived Nadezhda Cup tournament was scant consolation in Omsk.

Dynamo fell early in the playoffs, relinquishing its grip on the cup. Maybe Znarok was distracted by his impending move to coach Team Russia, but the team lost out in seven to Lokomotiv in the first round of post-season action. That result blew the Western Conference bracket wide open, and Lev Prague surprised everyone by taking advantage.

Lev, one of an unprecedented four foreign teams to qualify in the West, started out by sweeping Medvescak. Next came a 4-2 series win over Donbass, which included the longest KHL game to date in game two. The teams reached a fourth period of overtime, before Donbass won it in 126:14. By this time, though, the deteriorating political situation in Eastern Ukraine made it impossible to play in Donetsk; forced to play home games in Bratislava, the team fell to Lev.

The Czechs, meanwhile, breezed past Lokomotiv in five to win the Conference final, reaching the Gagarin Cup final after just two seasons. Metallurg was waiting, after just two post-season losses. For the first time in KHL history, the Gagarin Cup would be won be a non-Russian coach – but would it be Canada and Magnitka’s Mike Keenan, or Finland and Lev’s Kari Jalonen?

It took seven games, and a KHL record attendance, to find the answer. In Magnitogorsk, the teams traded victories. Lev won the first match-up in Prague, and a huge crowd of 17,031 came to game four at the O2 Arena. Metallurg won 5-3, thanks to two Zaripov goals in the third period. Then came two overtime wins. Magnitka took game five thanks to a pair of Mozyakin goals, Lev took the series all the way with a 5-4 roller-coaster of a win in Prague, settled by a Nathan Oystrick goal.

That set up a deciding game in Magnitogorsk, and Metallurg’s offense proved too powerful. Seven home goals, with Mozyakin, Kovar and Zaripov all finding the net, secured a 7-4 victory. Keenan won the Gagarin Cup at the first attempt, becoming the first North American to win the top prize in Russia and the only man to win both the Stanley and Gagarin Cups. The Canadian clearly enjoyed his season, and not just because of the hockey. Footage of him singing a song by popular Russian performer Grigory Leps illustrated how firm a bond Keenan forged with the people in Magnitogorsk during the season.
For Lev, the first and – so far – only non-Russian team to contest a grand final, there was also a notable individual achievement. Forward Justin Azevedo scored a goal in all seven games of the Gagarin Cup final, a feat not yet matched.

The post-season scoring, just like the regular season, was dominated by Mozyakin’s line: he led the way with 33 points, Kovar and Zaripov had 26 each. Mozyakin also established six individual KHL records as he became the first player to break through 100 points in a full season. 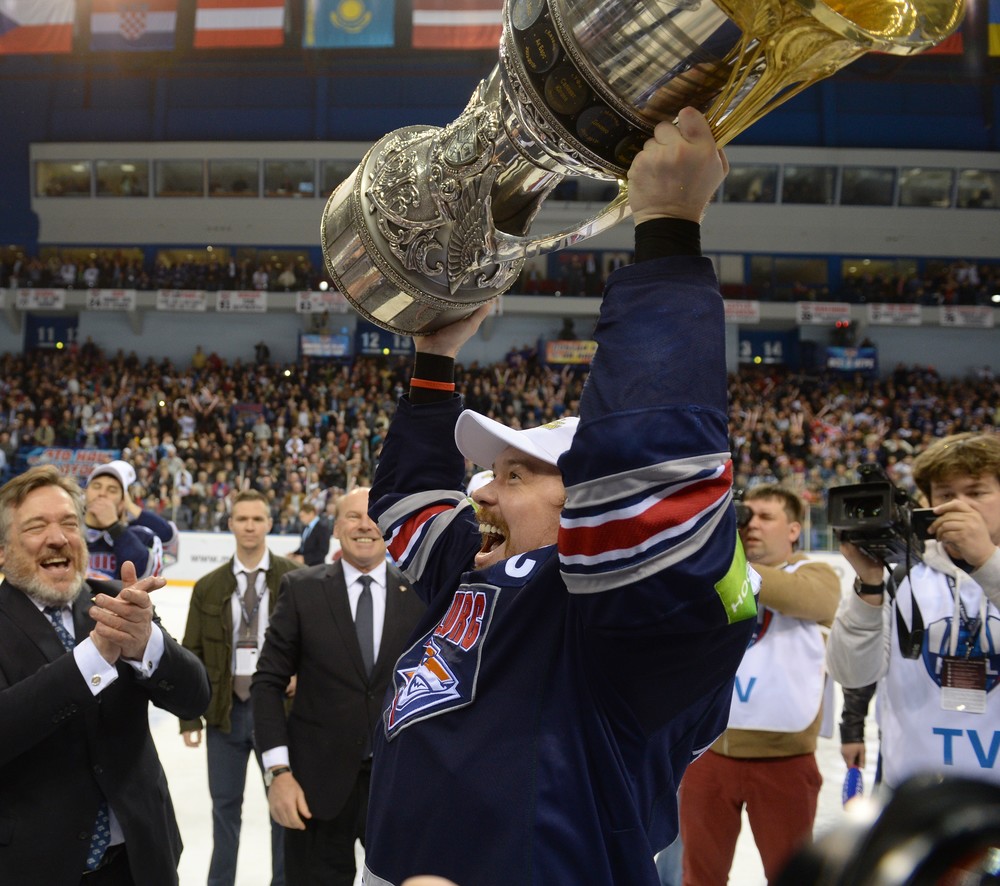