The 2011-12 season will always be remembered with great sadness by everyone in the hockey world. The devastating events of September 7 in Yaroslavl cast a shadow over the entire season. The plane crash that wiped out Lokomotiv’s team reverberated throughout the sporting world and the tragic accident dominated the year’s subsequent play.

On September 7, just as the Opening Cup game was getting underway in Ufa, Lokomotiv Yaroslavl was due to fly to Minsk. The team never arrived; their plane crashed on take-off, killing 44 of the 45 people on board. The hockey world lost 26 players and 11 coaches and staff members.

Tributes poured in from all over the sporting world. IIHF President Rene Fasel described it as “the darkest day in the history of our sport”. Manchester United Football Club offered a statement in sympathy and support, recalling its own air disaster in Munich in 1958. In Minsk, where Lokomotiv was due to play on September 8, Dinamo staged a requiem mass at the arena. Fans in Yaroslavl and beyond left spontaneous tributes at arenas. Similar tributes appeared elsewhere in the world, reflecting a multi-national roster with connections right across Russia, Europe and North America. The national hockey federations of Slovakia, Germany, Latvia and the Czech Republic retired the numbers of their international players lost in the disaster. Several NHL teams also paid tribute, culminating in the October 13 game between the Capitals and the Penguins which was dedicated to Lokomotiv and became a fundraiser for the families of the players and staff who died.

The opening days of the KHL schedule were postponed; to this day, September 7 is left blank in the league’s schedules in tribute to those who died. Lokomotiv withdrew from the league for the season, competing in the Youth Hockey League and, later, entering a team in the second-tier VHL. Play started again on September 12 in somber mood; games were preceded by a minute’s silence and took place without music or entertainment. 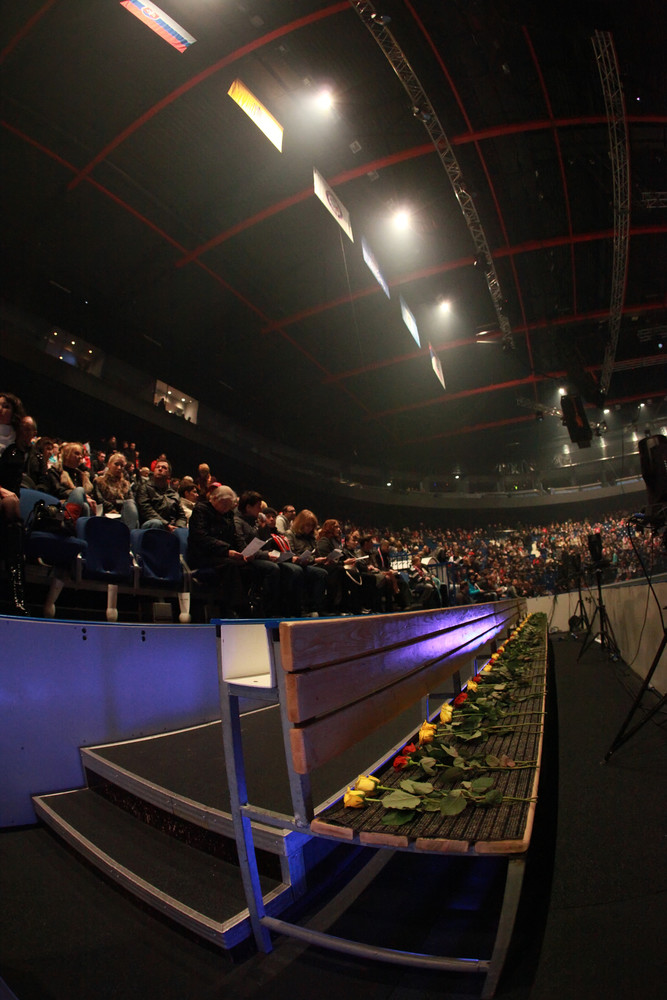 Prior to the Yaroslavl tragedy, there had been great optimism for the new campaign. The addition of Lev Poprad to the KHL marked a new boundary for the league, as it welcomed its first team from outside the former USSR. Lev, a newly-created club, had originally been invited to compete in the 2010-11 season, but was unable to complete all the necessary paperwork in time to compete. After resolving that problem, the team was ready to bring KHL hockey to the Tatras.

The new team found life tough to start with: an opening 2-4 loss at home to Metallurg Magnitogorsk set the tone for a hard campaign. It took six games to record a victory – 2-0 at Dinamo Riga – and the opening home win came on September 30, 4-1 against Dynamo Moscow. Despite some talented players on the roster, notably Ladislav Nagy, Lubos Bartecko, Tomas Netik and Karel Pilar, the team never found its formed and fell short of a playoff spot. 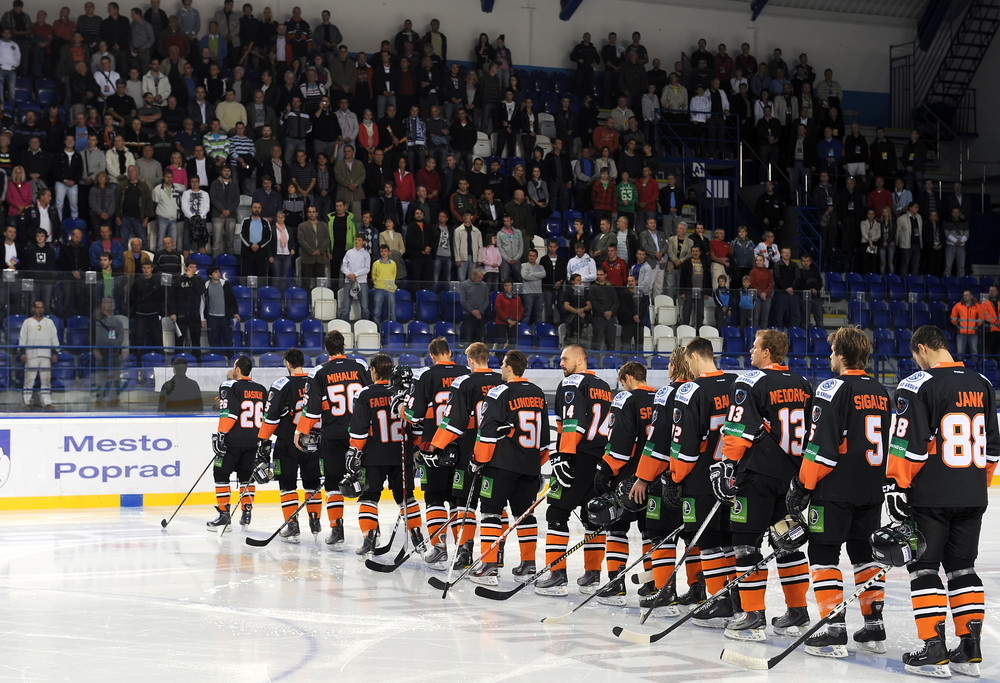 This was the season when Oleg Znarok announced himself as a top coach. He’d already raised eyebrows by taking MVD to the Gagarin Cup final, but now, at Dynamo Moscow, he won his first Gagarin Cup.

The Dynamo team was not a star-studded affair. None of its players featured among the KHL’s top scorers in the regular season, and of the 16 teams that made the playoffs, nine scored more than Dynamo. But the roster was a rugged, hard-to-beat group that epitomized its coach’s own competitive qualities.
If the regular season was somewhat muted, Dynamo ignited in the playoffs. The late-season acquisition of Mikhail Anisin from Vityaz was the catalyst: he potted 14 post-season goals – a KHL record – to lead a sweep of Dinamo Minsk and a 4-2 series win over Torpedo. Then came a Conference Final showdown with SKA. Dynamo travelled to Petersburg as the outsider, but rallied from 2-4 down to win the opening game in overtime. There was controversy: SKA had a potentially game-winning goal ruled out shortly before Denis Mosalyov completed his hat-trick to complete the win. That game put the momentum firmly in the Blue-and-Whites’ favour, and the series ended in an unexpected sweep, culminating in a spectacular 6-1 win at Luzhniki.

In the East, there was a new face on the playoff block: Amur Khabarovsk made it to post season for the first – and so far only – time in its KHL history under the guidance of Hannu Jortika. Jakub Petruzalek and Petr Vrana were the scoring stars as the Far East team enjoyed its best campaign for years. There was also a strong showing from Traktor, inspired by a young Evgeny Kuznetsov, and backstopped by the impressive Mike Garnett, topped the regular season table. The Chelyabinsk team advanced to the Conference Final, beating Ak Bars along the way and coming 17 seconds short of setting a new record for the longest ever KHL clash, before losing out to Avangard.

The Gagarin Cup final pitted the two best defenses in the league against one another. Alexander Yeryomenko and Karri Ramo had been in fine form between the piping, and the opening games were tight affairs. The teams traded 2-1 wins in Omsk, before Avangard came to Moscow and edged a 1-0 verdict before squeaking an overtime victory.

Then came the bombshell. Anton Belov, a key component of Avangard’s defense, was suspended after failing a drug test. Dynamo’s offense took advantage, claiming a 3-2 victory in Siberia then blasting five goals past Ramo in Moscow. That set up a game seven decider in Omsk, and Yeryomenko’s shut-out, plus a third-period goal for Jakub Klepis, earned Dynamo, and Znarok, a first Gagarin Cup triumph. 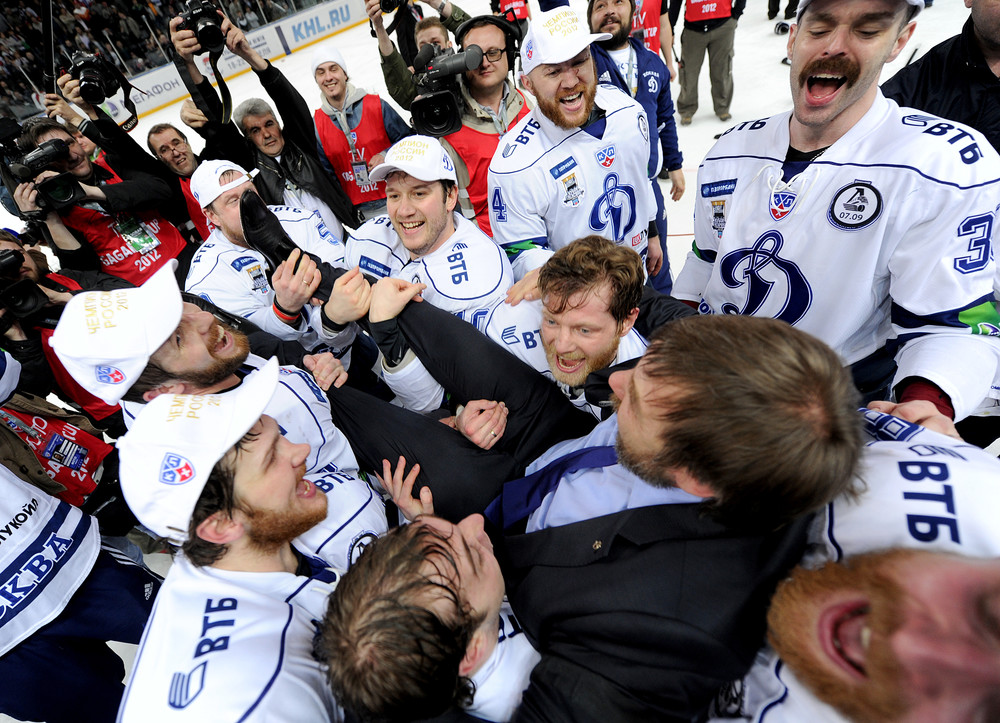