With the group stages of the World Championship almost done, Russia is out in front. Oleg Znarok’s team has gone undefeated through five games so far, with the only blemish coming at the start when it needed overtime to come from behind and defeat Sweden. Since then, impressive victories over Italy (10-1) and Slovakia (6-0) have helped put the team through to the quarter-finals in Cologne, while SKA’s Vegas-bound forward Vadim Shipachyov is on top of the tournament scoring charts with 10 (2+8) points.

It’s not all been good news for the Russians, though. An injury to Sergei Mozyakin, crudely slew-footed by Germany’s Patrick Hager early in a 6-3 win, has ruled Magnitogorsk’s record-breaking forward out of the rest of the competition. His place is taken by CSKA’s Valery Nichushkin, with further reinforcements arriving from the NHL in the form of one-time Traktor prodigy Evgeny Kuznetsov and Metallurg Novokuznetsk graduate Dmitry Orlov.

KHL interest goes beyond Russia, though. Not surprisingly, Latvia’s roster draws heavily on players from our league and the Baltic nation is looking good for a quarter-final spot for the first time since 2009. Under the guidance of new head coach Bob Hartley, the Latvians can clinch a top-four finish with victory over Germany in Tuesday’s final group game. Last week, Dinamo Riga’s Miks Indrasis told us more about how Latvia is changing its approach in search of success at this year’s competition.

Indrasis ready to Miks with the best Even the mighty Canadians have recruited from the KHL this time. Metallurg Magnitogorsk D-man Chris Lee became only the second KHL player to wear the Maple Leaf at an IIHF World Championship when he suited up in Canada’s 3-2 victory over France on Thursday. Lee contributed an assist as the defending champion subdued a lively host nation in Paris. With Canada currently on top of Group B, there’s every chance Lee will find himself up against his Metallurg head coach Ilya Vorobyov when the medal games come around – Vorobyov is part of Znarok’s coaching team.

For the first time ever, the World Championship has seen goals from China. While the People’s Republic is still some way from icing a competitive team – China’s national program competes in Division IIA – players from Kunlun Red Star have made an impact in Paris. France’s Damien Fleury became the first Kunlun player to score in an IIHF tournament as he helped his team to an historic 5-1 victory over Finland. Fluery is currently on 3+2 for les Bleus. Later, Tomi Sallinen, a late call-up for the Finns, scored on his first appearance for the Lejionat, helping to clinch a 5-2 victory over Slovenia. The Finns have also given ice time to Harri Sateri and Miro Aaltonen, bringing a rare Vityaz presence to the world stage.

Fleury isn’t the only KHL player helping the French.Stephane Da Costa, of CSKA Moscow, has banged in six goals for the co-host, although his contribution won’t be enough to see the French make it to the knock-out stages. 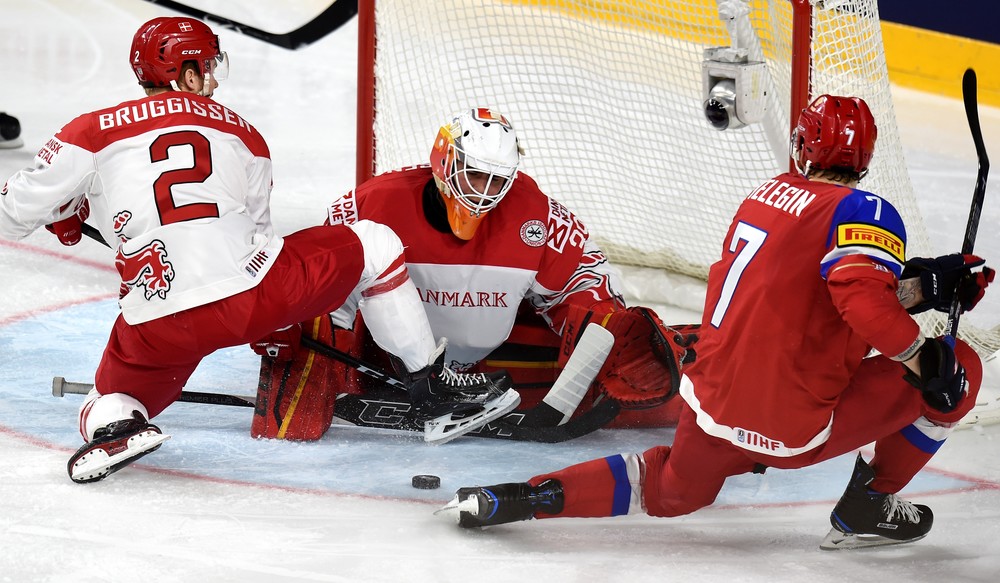 It’s not all been a success story, though. Belarus, with a roster dominated by Dinamo Minsk men, has had an unhappy tournament. Expected to be a contender for a QF berth, the Belarusians instead were dragged into a relegation showdown. A 5-2 victory over Slovenia on Saturday, powered by two goals from Dinamo’s Alexander Pavlovich and a three-point contribution from clubmate Ilya Shinkevich, should be enough to save Dave Lewis’ team but the tournament will not be fondly remembered in Minsk.

Similarly, Slovakia has struggled. Nine World Championship rookies, including Avtomobilist D-man Michal Cajkovsky, have found it tough in Group A. The decision to invite many of the country’s Slovan Bratislava contingent to switch to Banska Bystrica in Slovakia’s Extra Liga was intended to ensure game time after Slovan’s season ended in February. But it hasn’t done much to enhance Slovakia’s progress as an overtime win over Italy proved to be the country’s sole success in Cologne so far.

Similarly, Slovenia – with KHLers Jan Mursak (CSKA), Robert Sabolic (Admiral), Jiga Jeglic (Torpedo) and Rok Ticar (Avtomobilist) – has also found life tough. With one game to play, the team has just one point and is facing relegation to Division IA.