All-new All-Stars and the playoff race: Review of the season, part 2

The second half of the regular season brought more moments of history. Sergei Mozyakin set more individual scoring records, SKA set a new marker for team scoring. Chad Rau got the first ever winner in 3-on-3 overtime, while his Kunlun Red Star team qualified for the playoffs at the first attempt. Vityaz also reached its first playoff in the KHL era, ending a nine-year wait. And a new-look All-Star Game delivered a brand-new star in the form of 18-year-old Andrei Altybarmakyan.

Andrei Kareyev isn’t a household name, but there’s evidence to suggest that the young goalie might be soon. On December 9, he made 52 saves for Metallurg Novokuznetsk against Avangard, setting a new KHL record. It wasn’t enough to claim the win, though: the visitor took the verdict in a shoot-out after a 2-2 tie.

A rule change introduced on December 13 meant that tied games would be settled by a period of 3-on-3 overtime, mirroring amendments made by the NHL and the IIHF for tournament play. Four days later, Chad Rau claimed a small piece of history by grabbing the first game-winner in that format for Kunlun Red Star, snapping a 3-3 tie with Avtomobilist.

Nigel Dawes had a memorable Christmas, celebrating December 25 with a hat-trick as Barys defeated Magnitka 5-3. His treble was the eighth of his KHL career and made him the leading scorer of hat-tricks in the league’s history. Dawes also became the highest scoring import in the KHL earlier in the season, overtaking clubmate Brandon Bochenski.

Elsewhere, the World Junior Championship got underway in Canada … and Kirill Kaprizov was one of the brightest stars on display. The Salavat Yulaev youngster cemented his burgeoning reputation with a powerful performance on the international stage. He started with a goal and an assist in Russia’s 3-5 loss against Canada, and kept on scoring to finish with 9 goals and 3 assists from seven games as Russia took bronze. His clubmate Mikhail Vorobyov weighed in with 10 assists in the tournament 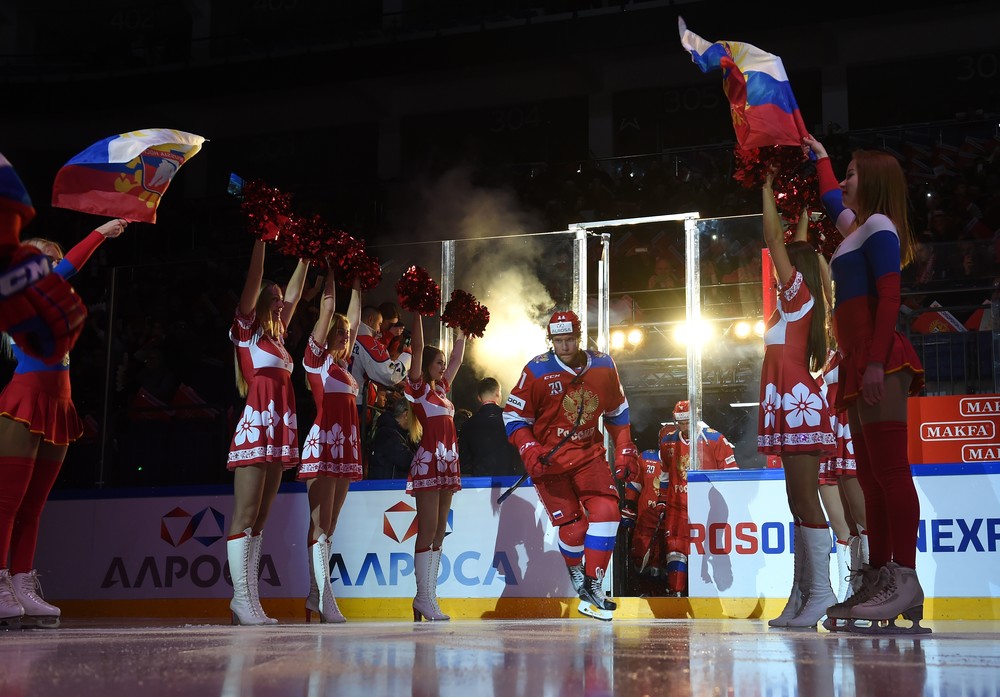 January – Altybarmakyan shines among the stars

Salavat Yulaev’s slump became the talking point of the New Year. Expectations were high in Ufa, especially after the success of the team’s juniors in the World Championship. But 2017 was hardly a happy new year for the club as a long losing streak plunged its playoff prospects into doubt.

But there were happier times in the capital of Bashkiria when the 2017 All-Star Game came to town. This year’s event had a new format, with showcase games featuring the best players from Russia’s Youth, Women’s and Sledge Hockey teams as well as the KHL. The main event was also a bit different – instead of a head-to-head clash between the Eastern and Western Conferences, the climax was a four-team showdown between teams representing the KHL’s four divisions. Each team was supplemented by a rising star selected from the Junior All-Star Game earlier that week.

Victory went to the Chernyshev Division, but the game-winning hero was a surprise. Young Andrei Altybarmakyan made the most of his wild-card pick with the decisive goal in a 3-2 victory over the Tarasov Division.

In the championship, the race for the regular season title was down to a two-way fight between SKA and CSKA, while Metallurg Magnitogorsk was out in front in the East. The playoff battle was intriguing. In the East, newcomer Kunlun Red Star was fighting it out with Sibir, Neftekhimik and Admiral, while the West saw Vityaz continue to press the likes of Jokerit and HC Sochi. 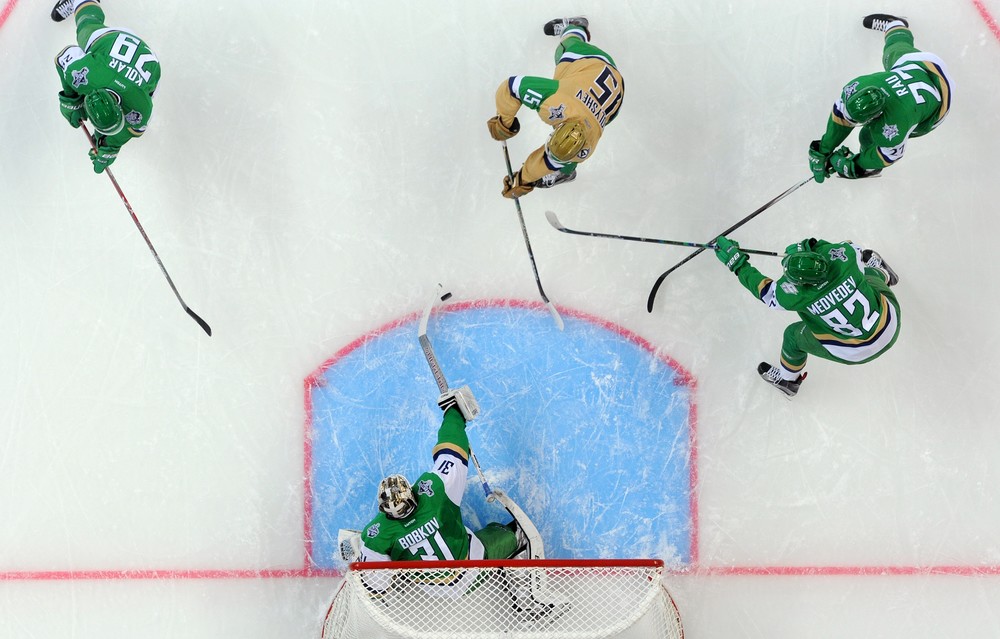 History was made at both ends of the KHL map as the regular season came to a thrilling close. First, Vityaz reached the playoffs for the first time ever, claiming seventh place in the West and helping to condemn HC Sochi to an early finish for the first time since the Black Sea team joined the league in 2014. In the East, though, the battle went to the final day as Admiral, Sibir and Kunlun jousted over two remaining spots after Salavat Yulaev rallied to win its final two games and end its miserable run of form.

Ninth-placed Sibir was first up, needing a regulation-time win at Avtomobilist to put the pressure on its rivals. Andrei Skabelka’s team had overcome serious injury problems to remain in contention, and led 1-0 thanks to a second-period goal from Yegor Milovzorov. But a goalie error in the third period handed Avto a tying goal and the shoot-out win wasn’t enough. That meant that Kunlun already knew it was safe, despite a 2-1 loss at Dynamo Moscow. Admiral won 3-1 at Vityaz to take seventh place.

The final week also brought drama at the top of the table, where CSKA overhauled a three-point deficit to claim the regular season crown for the third season running – but by the narrowest of margins. The Muscovites finished level with SKA on 131 points, taking top spot by virtue of a greater number of victories in regulation. CSKA’s reward was a first-round playoff series against Jokerit, while SKA would face Vityaz.

Among the individual stats, the race between Sergei Mozyakin and Ilya Kovalchuk to top the scoring charts was the key battle. Mozyakin came out on top, with 85 points (48+37) establishing a new KHL best. He improved on Steve Moses’ 36 goals for Jokerit in 2014-15 and Alexander Radulov’s 80 points for Salavat Yulaev in 2010-11. But he finished the season tantalizingly short of next big milestone: his career points tally was 999 ahead of the playoff series against Kunlun. Kovalchuk could not overtake his rival, but his 78-point haul still helped SKA to 249 goals in regular season – another KHL scoring record. 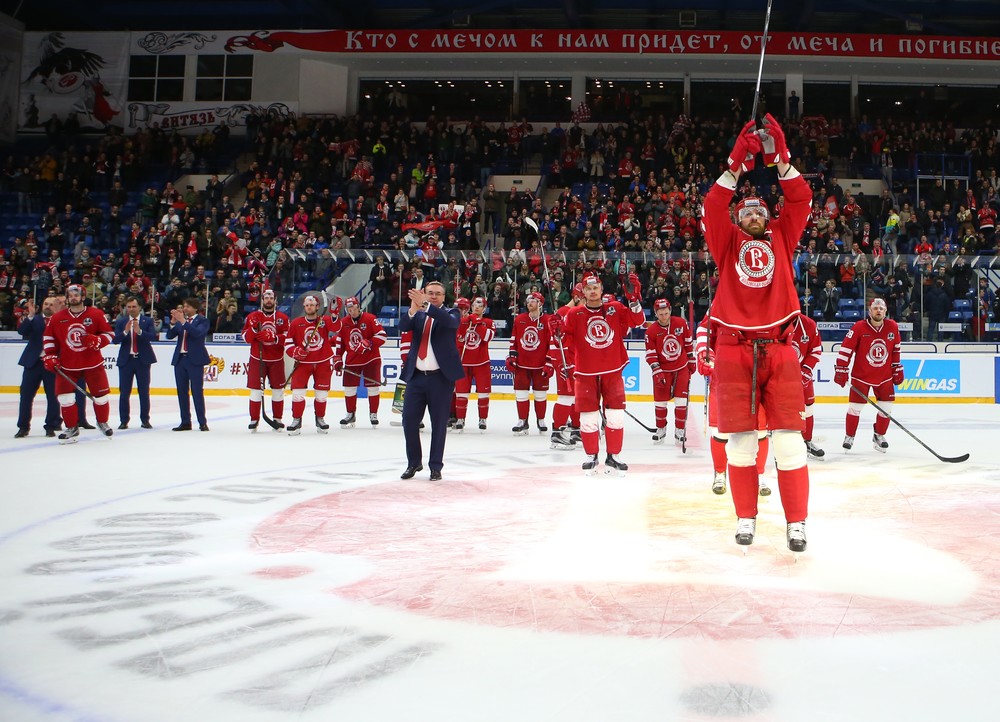