When it comes to Eastern Conference success, Metallurg Magnitogorsk and Ak Bars Kazan are the go-to teams. Between them, they’ve featured in five out of eight Gagarin Cup finals. They’ve represented the Eastern Conference in the last three seasons and both organizations are bidding to become the first team in history to win three Gagarin Cups. Yet their paths to glory have been somewhat different.

For Metallurg, continuity has been the key. The team that has reached this stage bears more than a passing resemblance to Mike Keenan’s 2014 championship roster. Persevering with the Mozyakin-Kovar-Zaripov troika was something of a no-brainer, but it’s impressive to see how many senior players from three years ago are still producing top-class performances. The likes of goalie Vasily Koshechkin and defenseman Chris Lee remain formidable players, while Lee’s partner Viktor Antipin, still just 24, has matured into a player whose contribution belies his relatively young age. New players have been introduced, but they tend to emerge from within the Metallurg youth system – eg Alexei Bereglazov – or get snapped up as promising youngsters – such as Evgeny Timkin or Tomas Filippi. There’s no attempt to buy instant success here; the focus is on establishing a dynasty at the top of the game.

Even behind the bench, the changes have been evolutionary rather than revolutionary. Keenan moved upstairs into an advisory role during the 2014-15 season, bringing his deputy, Ilya Vorobyov, into the spotlight. Vorobyov has continued to work with the coaching infrastructure that existed under Keenan, and the whole organization has reaped the rewards of that consistency. While there may be an element of good fortune in that key players have remained fit and in form for several seasons, there’s no luck at all about consistent results at a club that has established a clear model of how it plays its hockey.

The Ak Bars story is rather different. On the face of it, it’s easy to draw a direct line linking Zinetula Bilyaletdinov’s all-conquering teams of 2009 and 2010 and the present roster. Coach Bill is still in charge, and during his absence on international duty his place was filled by long-term right-hand man Valery Belov. When Bilyaletdinov led the team to the Gagarin Cup final in 2015 at the end of his first season back at the club following his spell in charge of Team Russia, it felt like business as usual at a club he has dominated for more than a decade.

Not so. A radical overhaul of the club’s roster followed the 1-4 loss to SKA. It started on defense, where Ilya Nikulin, Evgeny Medvedev and Yakov Rylov were among the stalwarts to move on. Of the nine D-men who suited up in the 2015 playoffs, only Stepan Zakharchuk and Damir Musin are still involved in Kazan, while goalie Emil Garipov has emerged from the sidelines to be the undisputed #1.

Up front, the changes are less prominent, although the departure of Osсar Moller has affected the potency of Ak Bars’ offense. The key new figure, Vladimir Tkachyov, was involved in 2015 but has gone from a bit-part player to a vital component of the attack. Now 23, he’s enjoyed something of a break-out year this time around, winning an All-Star call-up and international recognition. Currently he tops the post-season scoring in Kazan with 11 (2+9) points. This season’s leading playoff goalscorers for the club, Jiri Sekac and Fyodor Malykhin, have both arrived since the previous Grand Final appearance. Sekac, part of the Lev Prague team that reached the 2014 final, has renewed a profitable combination with Justin Azevedo, Malykhin has quietly grown in stature since arriving from Avtomobilist.

Perhaps the most intriguing change in the two rosters involves Rafael Batyrshin. This time last year, the defenseman was part of Magnitka’s cup-winning roster. Now, he’s shrugged off the injuries that blighted his regular season and is a solid part of Ak Bars’ defense. An archetypal ‘stay-at-home’ D-man, Batyrshin doesn’t grab the headlines in the manner of Lee or Nikulin – his three post-season assists this time around represent a career high. Now, Kazan waits to see if his insider knowledge of Magnitka’s all-powerful forwards can wrest the cup away from the holder.

The Eastern Conference Final begins in Magnitogorsk on Friday, March 24. The series continues until one team records four victories. 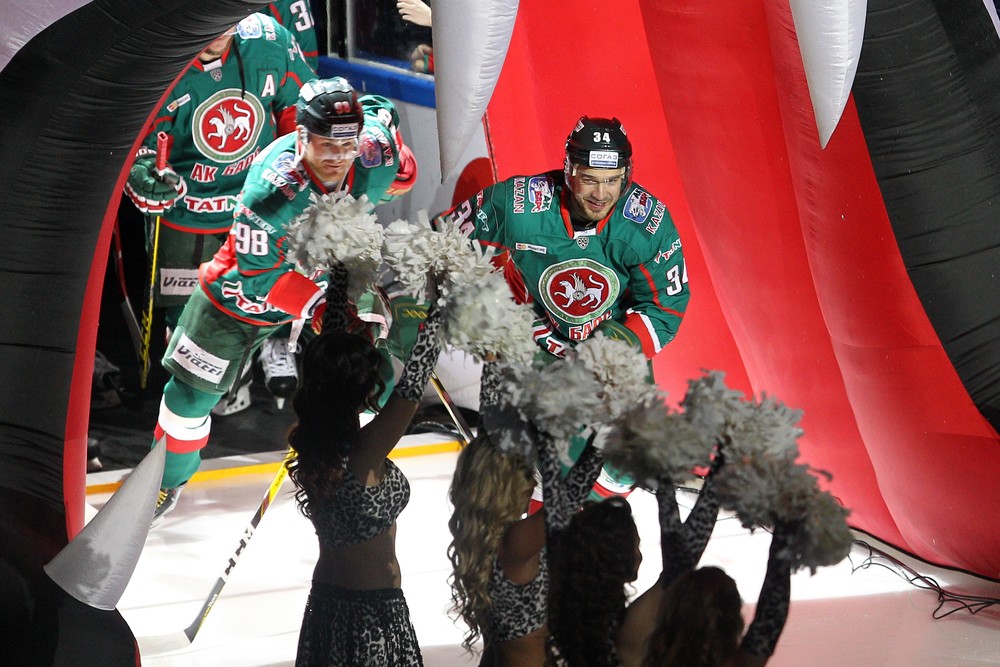