On Wednesday, the 22nd of February, KHL debut club Kunlun Red Star of Beijing faced off against defending champion Metallurg in Magnitogorsk, in Game 1 of the Eastern Conference playoff quarter-final series.

The Gagarin Cup holder celebrated a 4-2 win, but, having gone into the second interval coasting at 4-0, the home side endured an uncomfortable final session and a very tense final minute, with a man in the penalty box and a determined opponent seeking to pull off an amazing comeback.

In fact, the mere presence of the Beijing side in the playoffs merits the term, “amazing.” Slovan Bratislava has a 96-year history, and failed to reach the playoffs. Kunlun Red Star’s history stretches back to the summer of 2016. Valery Belov’s Vityaz rightly earned plaudits for booking a playoff berth at the ninth attempt. Under the shrewd guidance of Vladimir Yurzinov Jr., the Beijing boys managed the feat in their debut season.

Red Star’s Vancouver-born defenseman, Zach Yuen, played in all 60 regular season games and scored 11 points (3+8), which included the first ever point and first ever goal by a Chinese player in KHL history. The 23-year-old has attracted a lot of attention from the media in three continents, but he kindly spared some time to talk to khl.ru during the toughest part of the season.

“You cannot lose concentration for a second”

We will start with the most important question. How are you? Early in the third period, you took a heavy hit while making a break from defense.

Zach Yuen: I’m fine. I took a hit to the elbow, yes, but it looked worse than it was. It’s the playoffs.

You did what most teams have failed to do: you stopped Mozyakin, Zaripov, and Kovar from scoring, but you still found yourself on the losing side. Is that very frustrating?

Zach Yuen: They are the champions. They have that depth of talent, and that is why they have won the Gagarin Cup twice in three years. They have a core of good players who have been together for a while. That is what we have to aim for. 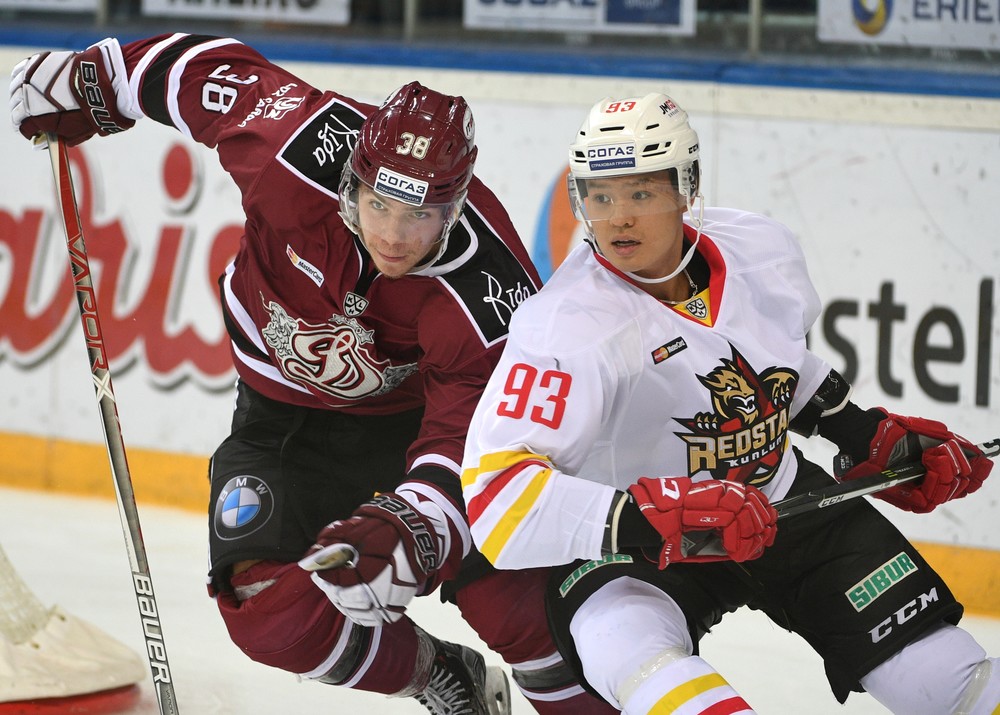 There was a big difference between the middle and last periods. You were almost as dominant in the third as the Magnitka guys were in the second.

Zach Yuen: We knew we had to keep our discipline, and we gave them few powerplays, which is something we talked about and we knew we’d have to do. But we went to sleep a little in the second period, and when you’re playing against a team like Metallurg, you cannot afford to lose concentration for a second. If you do, you get punished. And maybe Metallurg relaxed a little in the final period.”

“The confidence was there right from the beginning.”

In August, Red Star Kunlun was seen as a novelty, and now, just six months later you are a serious contender, one which qualified for the playoffs and has shown it can cause the Gagarin Cup holder problems on the champion’s own ice. Few could deny this a tremendous achievement. How did you do it?

Zach Yuen: We have a great coaching staff and there has always been a great team spirit. Even despite the language barrier - there are seven different languages spoken in the locker room. It’s true some of the team already knew each other, like the guys from Finland, for example. But there is a great team spirit.

Was there a moment during the season – maybe a victory or a series of good results - when the team realized that it had a real chance of reaching the playoffs and the confidence grew?

Zach Yuen: The confidence was there right from the beginning. We started the season with a win over Amur in Khabarovsk followed by another over Admiral in Shanghai, so it’s not as if we had to climb up the standings. We spent most of the season hovering around 6th to 8th place. Others might have doubted us at the start of the season, but we were always confident that we could qualify for the playoffs.

You are still only 23. Do you think you have become a better player over the course of this season?

Zach Yuen: Yes, it is the KHL, the second strongest league in the world after the NHL, so of course I am a better player after spending a season here.

“I’m still not used to the traveling, but it’s no problem”

Was it easy to adapt after crossing the ocean? How do you find the larger playing surface?

Zach Yuen: I prefer the bigger rink. It suits my style more. I’m not one of the big guys – well, I’m average size, but my game is more based on skill and speed, and the extra space gives me more freedom to play to my strengths.

How about the long distances?

Zach Yuen: The travel is something else, especially coming from North America, where it is usually on buses and it might take two or three hours. It’s not so much the time but the time difference, with some road trips crossing seven time zones. I don’t know if I’ll ever get used to it, but it’s not a problem. 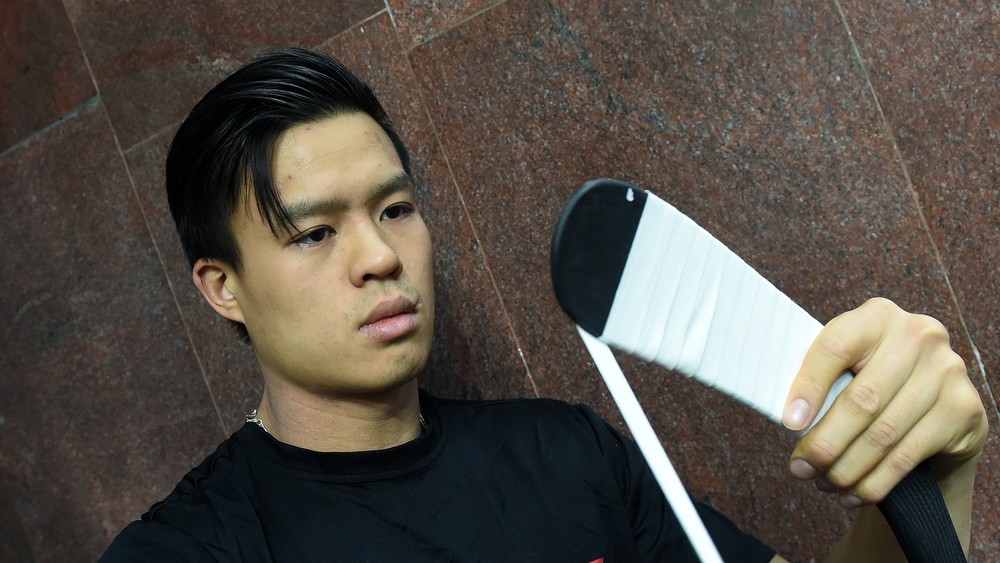 What is the atmosphere like at the home games in China? You played first in Shanghai and then in Beijing. Is it very different from playing in North America?

Zach Yuen: Yes, there is no real hockey tradition in China, and at the start of the season, in Shanghai, we only had a few hundred people at the games. But in Beijing we have been attracting crowds of four or five thousand, which is not bad considering that a professional hockey club is a completely new thing. People would go to one game out of curiosity and find they really enjoyed it and they keep coming.

Has the Chinese media shown a lot of interest?

Zach Yuen: Yes. I’m always doing interviews for the Chinese press, and the Red Star Kunlun games are shown throughout the country on CCTV, the main state broadcaster in the People’s Republic.

“There are no days off during the playoffs”

You said you have family in Hong Kong. It is still a long way from Beijing, of course, but have any of them travelled to see you play?

Zach Yuen: It’s not really that far, so yes, my relations in Hong Kong came to see me play, and my parents also came over from Vancouver to visit.

Obviously, hockey players must focus on the next game, but may I ask about your long-term goal, and the goal of the government of China? The task is to put together a national team to compete for medals at the 2022 Winter Olympics in Beijing.

Zach Yuen: Five years is not a very long time, in hockey terms, and there is a long way to go before the system matches that in North America. Hockey schools are a new thing in a country where everything is traditionally academic-based, but there are plenty of youngsters coming through. The government wants hockey to be popular across China, not just in Beijing, and they are building hundreds of hockey rinks all around the country.

Back to the immediate future. Tomorrow you face Magnitka again. Is it possible to relax and switch off on days between playoff games?

Zach Yuen: The playoffs are pretty intense. There are moments when I can relax, but I don’t really want to switch off. You don’t have any days off during the playoffs. And I want to focus on getting the job done. 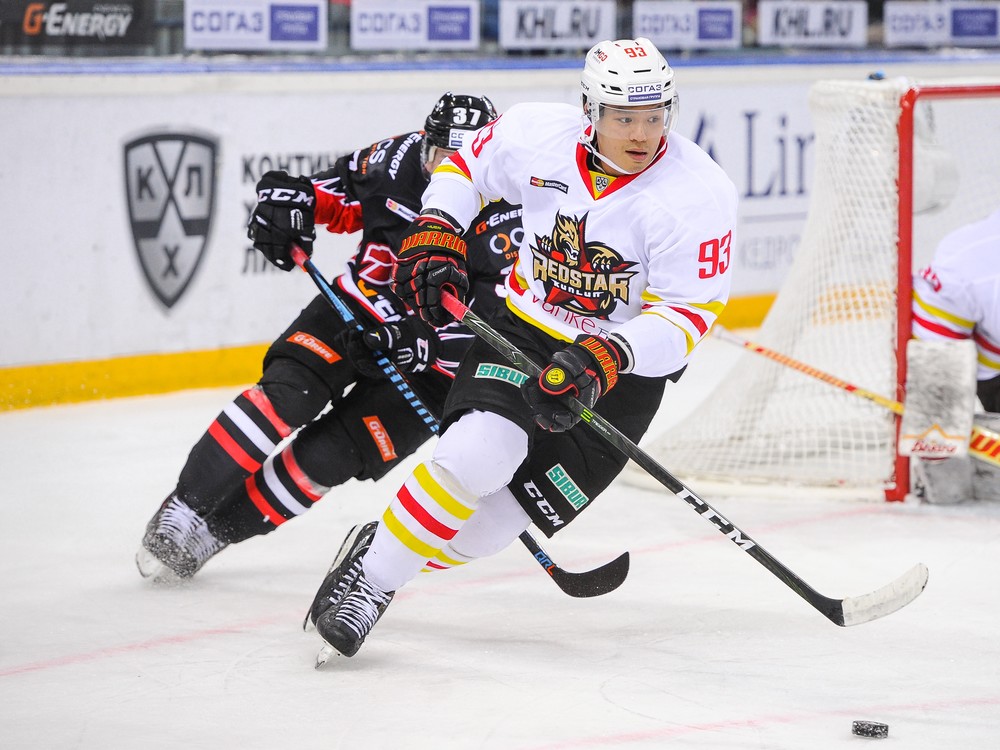