Chinese hopes and a long-standing rivalry. The playoffs start in the East.

Ak Bars and Salavat Yulaev, two of the oldest rivals in the KHL, prepare to do battle once again at the start of the playoffs. For defending champion Metallurg, Sergei Mozyakin seeks a memorable milestone, while Kunlun hopes to spring another surprise. Admiral hopes for its first ever playoff series victory against Avangard, while Traktor’s impressive goalie Pavel Francouz can burnish his reputation against Barys’ record-breaking strike-force.

For defending champion Metallurg, regular season was all about Sergei Mozyakin. Russia’s all-time leading scorer is hardly a secret weapon – KHL teams have been trying and failing to stop him since the league was formed – but this season saw him hit new heights. Not content with topping Boris Mikhailov’s long-standing record of 428 top-flight goals – a record set months before Mozyakin was born – the master marksman went on to pile up the achievements. The season brought 48 goals, smashing the previous best of 36 for Steve Moses two years ago. He finished with 85 points, five better than Alexander Radulov’s record at Salavat Yulaev. And his first scoring contribution in post season will bring up 1,000 career points – an unprecedented millennium in Russian hockey.

It’s not all about Mozyakin, though. Ilya Vorobyov has largely stuck with the roster that won it all last time, and his big players – Chris Lee, Jan Kovar, Danis Zaripov – have all piled up the points once again. Young goalie Ilya Samsonov has underlined his credentials as one for the future, while the maturation of D-man Viktor Antipin – still only 24, despite averaging 20 minutes a game for the last five seasons – is just one sign of the club’s success at nurturing and introducing talent from its junior ranks.

In Kunlun, Magnitka faces an opponent that has arguably exceeded expectations just to reach the playoffs. The Chinese team struggled to get over the line, losing its last three games as the race for the top eight got ever more nervous, but having made history in its debut season, Red Star is determined to prove that it can compete with the best. The two regular season meetings showed a new team scrambling up a steep learning curve: outclassed in Shanghai in October, Kunlun showed great resilience in the return game six weeks later before losing out in the closing stages. If Vladimir Yurzinov can continue that upward trajectory for his team, Metallurg could find this series tougher than expected. 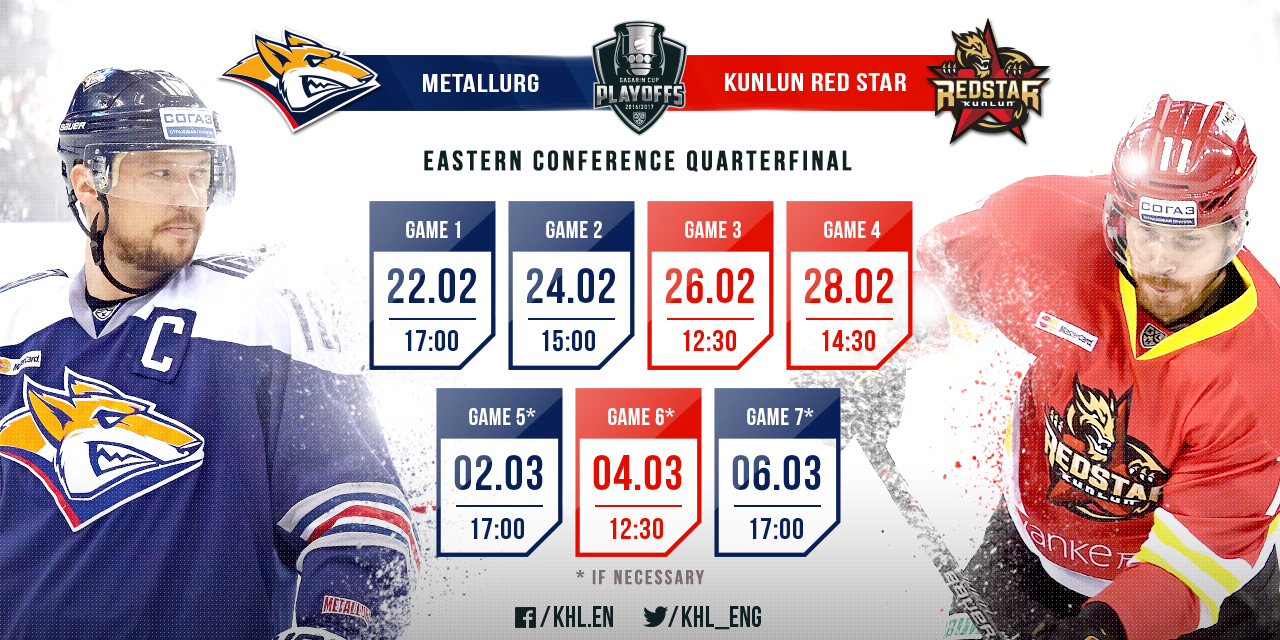 Such was Metallurg’s dominance in the Eastern Conference that Avangard’s convincing win in the Chernyshev Division went relatively unnoticed. That’s something that might suit the Omsk team, though, with expectations under control and the pressure reduced. Success this time has come from teamwork: there’s no one outstanding scorer, but a clutch of forwards chipping in with 25-30 points each. Anton Burdasov, who managed 25 points in just 35 games, could be the man to hit a series-winning streak in post-season; club legend Alexander Perezhogin remains a key figure.

Admiral is preparing for its third playoff campaign in four KHL seasons, but has yet to get beyond the first round after losing in six to Magnitka and in five to Sibir. This season saw the team battle until the final day to make it to the playoffs, finally booking its spot with victory at Vityaz. The scoring was dominated by Slovenian international Robert Sabolic (44 points) and 21-year-old prospect Vladimir Tkachyov (39). But the player whose performances really caught the eye was goalie Igor Bobkov, who earned himself an All-Star call-up and backstopped the Chernyshev Division to victory in Ufa last month. 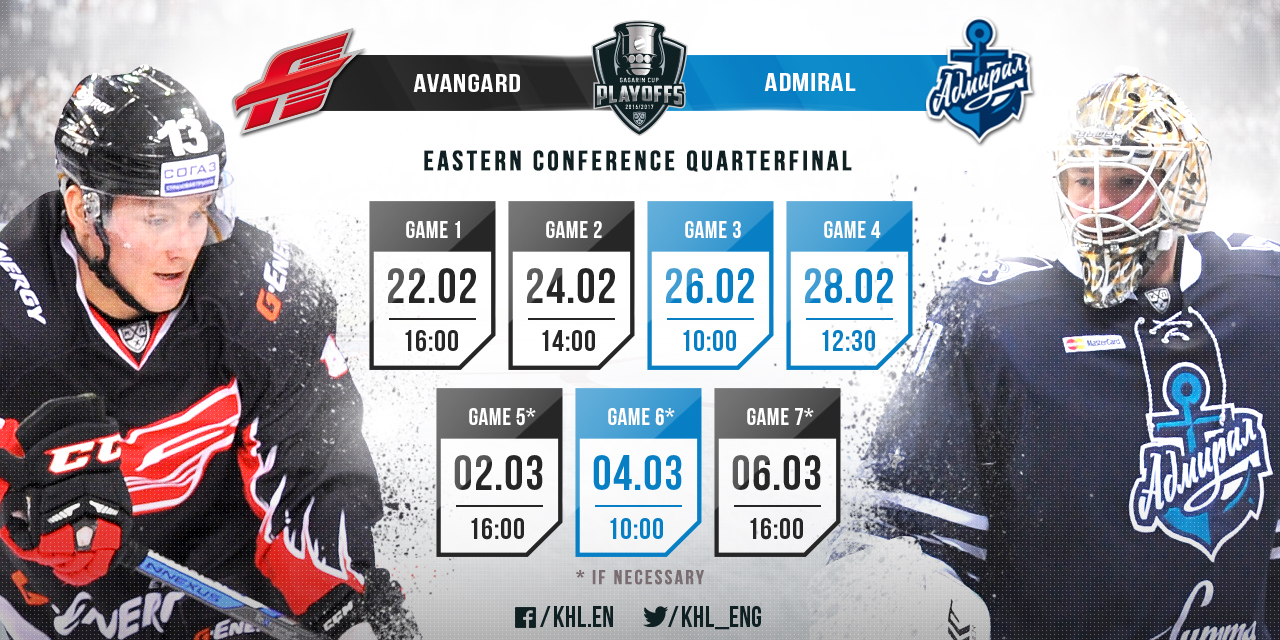 Somehow, games between these teams always feel like huge events. Last season’s incredible series at this stage of the playoffs was a great spectacle, going to seven games and ending with Salavat Yulaev rebounding from a crushing 0-8 loss to edge the decider 3-2. Past form, recent or historic, is not always much of a guide to future results here.

That’s relevant this time out as well. The teams met barely a week ago with Salavat Yulaev in danger of missing out on the playoffs after a nine-game losing streak. A 3-1 victory transformed the mood around the Ufa team and set up the series we’re anticipating now.

There are two match-ups that could define this series. The first is behind the bench, where Zinetula Bilyaletdinov and Igor Zakharkin renew an old rivalry. Zakharkin, with his long-term colleague Vyacheslav Bykov, was part of the Salavat Yulaev team that ended Ak Bars’ dominance of the championship when it won the Gagarin Cup in 2011. Then the same duo halted Bilyaletdinov’s bid to become the third coach to win the cup three times, leading SKA to a dominant 4-1 series sweep that ended with a crushing victory in Kazan to claim the prize. In between, Bilyaletdinov replaced the Bykov-Zakharkin duo at the helm of team Russia; these are paths that seem fated to cross.

On the ice, many are awaiting the chance to compare Kirill Kaprizov, Salavat Yulaev’s emerging star, with Vladimir Tkachyov, his Ak Bars counterpart. Tkachyov, 23, had something of a break-out season last time – including a playoff hat-trick in that 8-0 win – and has continued his progress this time around. All-Star invites and national team call-ups have followed, and he looks like one to watch. Kaprizov, still only 19, is readying for his first ever post-season campaign; learning his game at Metallurg Novokuznetsk offered little chance for playoff adventures. But his dominant displays at the World Juniors this winter and an eye-catching 42-point return in the regular season have marked him out as a major star in waiting. The coming months, with playoffs and then the World Championship, could be the point where he establishes himself at the top of the game. 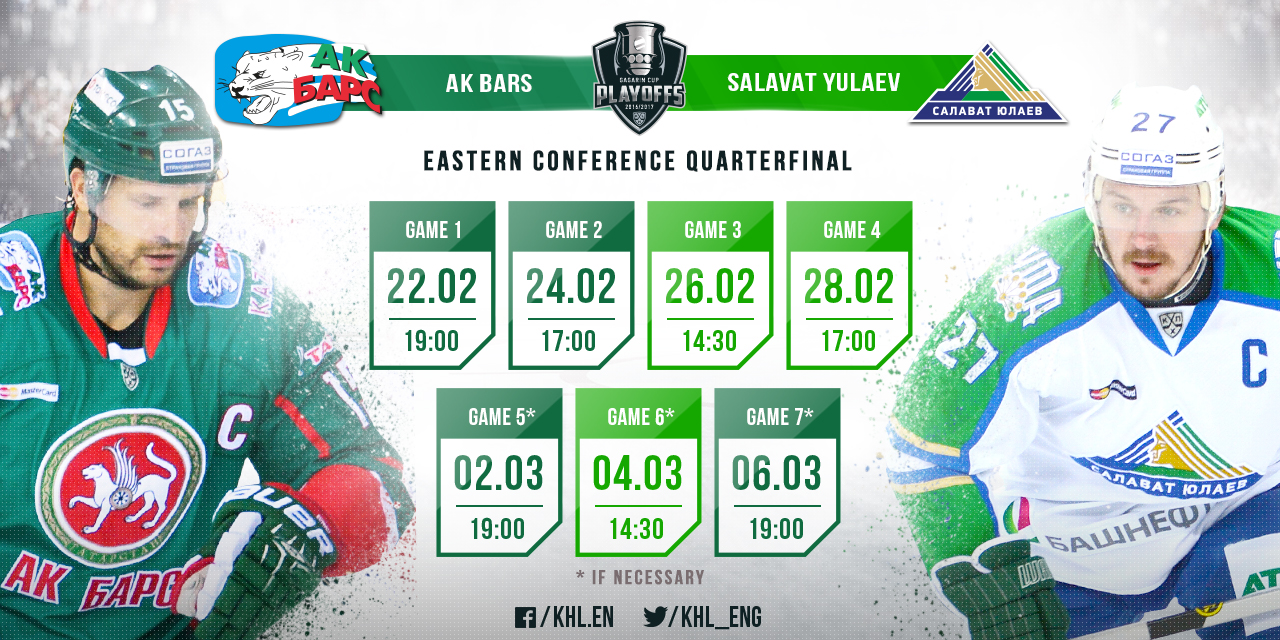 Traktor, beaten Gagarin Cup finalist in 2013, has struggled to hit those heights since. The team has managed just one playoff appearance in the following three seasons, and that ended in six games against Sibir. This time, though, things are different, and much of the revival is down to Pavel Francouz. The Czech goalie, still only 26, has been inspired this season. While the Russian media has thrilled to the emergence of young Ilya Sorokin and Igor Shestyorkin as potentially world-class stoppers, Francouz has quietly topped the stats. After stopping 95.3% of the 872 shots that came his way, he outshone everyone in that metric; his GAA of 1.46 was bettered only by Dynamo’s veteran Alexander Yeryomenko. And yet, Francouz is an equal partner in a goaltending tandem with Vasily Demchenko, yet another promising young Russian.

However, in its games against Barys, the emphasis has been scoring goals rather than keeping them out. Both meetings in the regular season were settled by the odd goal in seven, promising fertile ground for the visitor’s star troika of Brandon Bochenski, Nigel Dawes and Dustin Boyd. Boyd missed a chunk of the season after breaking his leg in a warm-up game during the summer, but shows signs of returning to form; Dawes and Bochenski continued to menace defenses and are now the first and second all-time imports on the KHL’s scoring charts. In another season, Dawes’ 36-goal haul would have matched another KHL record, but his prolific campaign has been somewhat overshadowed by Mozyakin in Magnitogorsk. 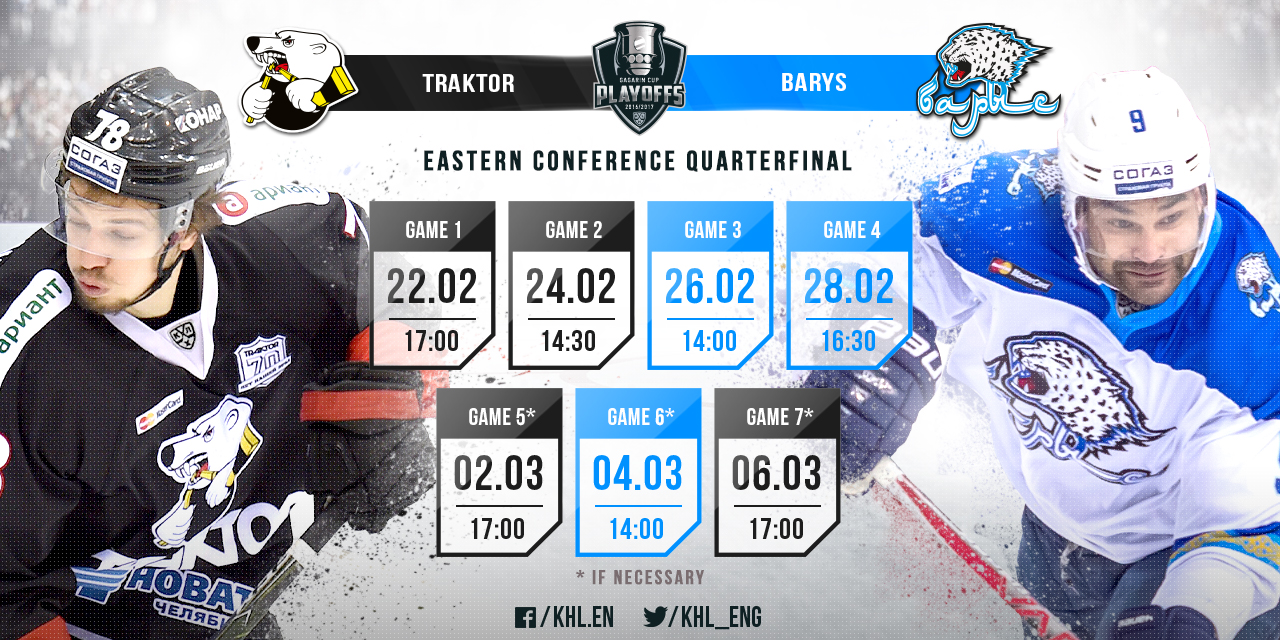