Dreaming of Gagarin – the Western Conference playoffs get started

CSKA looks to go one better, Vityaz seeks inspiration from its opponent’s achievements, Torpedo prepares to bring fire to Dynamo and Dinamo Minsk features some dangerous outsiders. The first round of the playoffs offers some intriguing match-ups in the Western Conference.

CSKA goes into playoff action hoping to make it third time lucky. For the past two seasons, the Army Men were top of the pile at the end of the regular campaign but found it was a case of ‘close … but no cigar’ in post-season.

Defeats in the Conference final in 2015 and the Grand Final in 2016 suggest that Dmitry Kvartalnov’s team is getting closer. This season, without the services of Alexander Radulov and Nikita Zaitsev, also proves how much depth there is on the CSKA roster. It might lack the stellar names and swashbuckling offense of SKA but, in the words of Soviet hockey legend Boris Mikhailov, Kvartalnov and the club’s management are adept at identifying precisely the players they need to succeed. Now it’s time to see if that can finally bring the big prize back to hockey’s most titled club.

In Helsinki, though, Jokerit seemed to suffer the opposite problem. Jussi Jalonen’s vast coaching experience didn’t always manage to build a team that could shake off the sense of going through a transitional phase. The Finns, with a relatively modest budget, are always vulnerable to losing players to rival teams and this season’s recruitment did not unearth the hidden gems we’ve seen in the past. A nervous wait to secure qualification for the playoffs only ended a week ago with HC Sochi’s defeat against CSKA; confidence might come from defeating the Army Men twice this season. 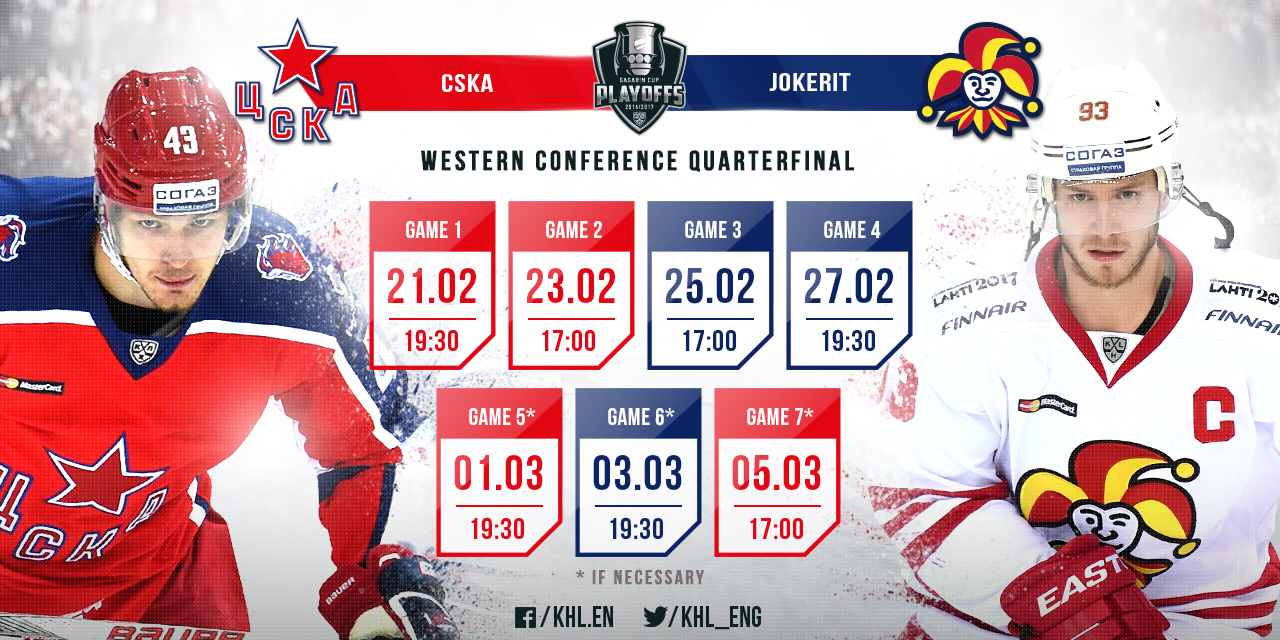 On paper, this might seem to be the biggest mismatch in the opening round of the playoffs. SKA, a regular contender to win it all, faces a Vityaz team that has never got this far before. A stellar Petersburg roster has smashed the KHL’s scoring record for regular season and finished with a mighty differential of +135 from 60 games. That’s not just averaging out ahead, that’s scoring 2.25 goals a game more than the opposition on average. Ilya Kovalchuk, Vadim Shipachyov, Nikita Gusev and Evgeny Dadonov made up four of the top five point scorers in this season’s KHL. With that kind of goal power, even the absence of injured duo Viktor Tikhonov and Sergei Plotnikov isn’t a huge problem.

But playoff hockey is a strange beast, and Vityaz can draw unlikely inspiration from its opponent here. SKA head coach Oleg Znarok was behind the bench as MVD, another modest Moscow Region outfit, went all the way to the Grand Final in 2010 in its first and only KHL playoff campaign. That unexpected run, and a similar success for Atlant the following season, will leave Znarok & Co well aware of the potential for an upset. And under guidance of Valery Belov, Vityaz has its own strengths, with fit-again Hari Sateri leading a solid goaltending tandem, Jakub Jerabek providing scoring power as a two-way D-man and Alexei Kopeikin in the form of his life. Former SKA forward Maxim Afinogenov missed Saturday’s game through illness but is expected to be fit for the start of the series. 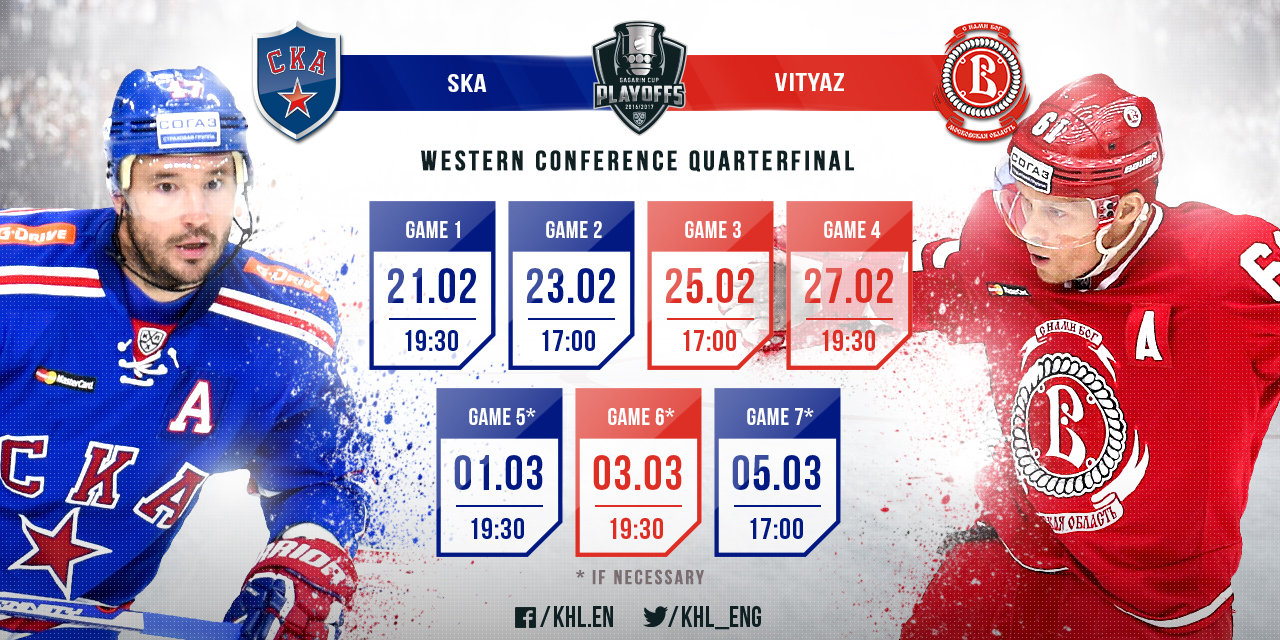 Dynamo’s season was a strange one. At times the Blue-and-Whites’ form was such that experts began questioning whether Sergei Oreshkin would lead his team into the playoffs at all. In November, for example, the team failed to win a single game in regulation. At other times, though, the Moscow club proved capable of giving any team a real game, and won twice against regular season champion CSKA. In 2017, Dynamo has lost just twice in 16 games, finishing the season in strong form and snatching third place from Lokomotiv.

Torpedo, meanwhile, was rarely far from controversy as head coach Peteris Skudra frequently found himself at loggerheads with the officials. That combative approach led to several suspensions, but inspired his players to greater heights. Captain Kaspars Daugavins argued that his fellow Latvian’s obvious passion for the club was a benefit that outweighed the potential hindrance of having him on the sidelines. Always a feisty proposition, Torpedo’s in-yer-face style was good enough to surprise Jokerit in the first round of last season’s playoffs and made it the only Western Conference team to defeat CSKA in post season. It’s fair to assume we’ll see more of the same in a series that could go the distance. 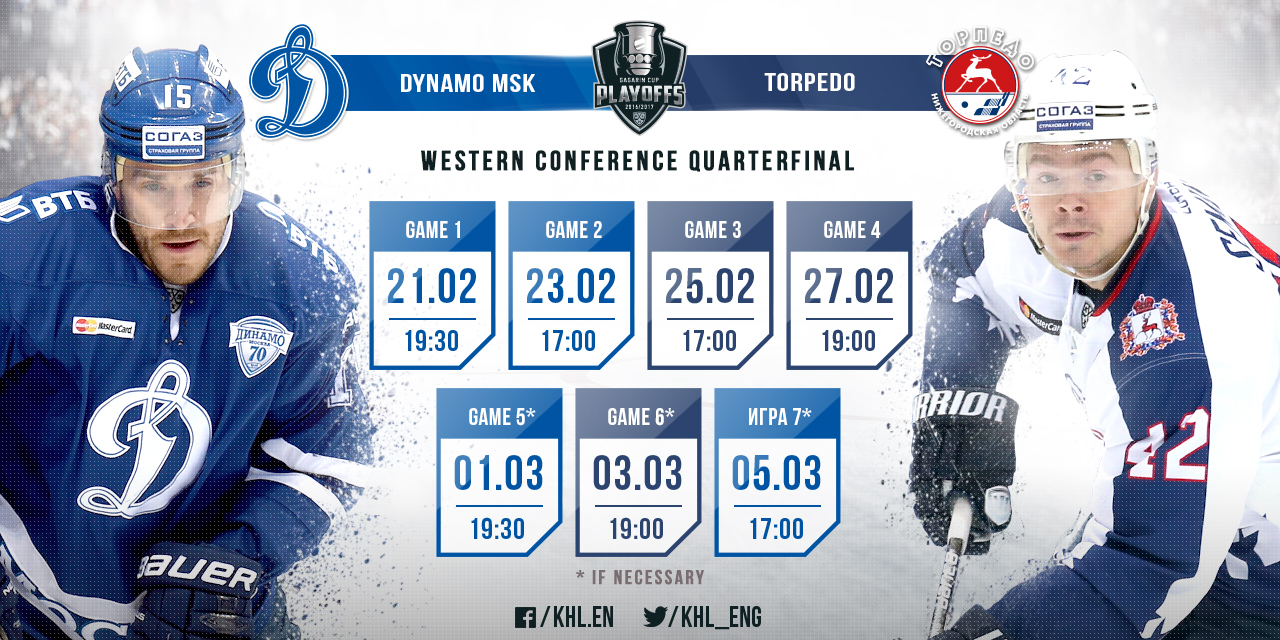 Lokomotiv, always a tough proposition in the West, found itself suffering a little in comparison with the top two this time around – and a painful 1-7 home loss against SKA was one of the most painful experiences in the Railwaymen’s KHL history. Highlights for Alexei Kudashov’s team include a 52-point return from former Jokerit forward Brandon Kozun, the emergence of u20 international Alexander Polunin and another impressive season from goalie Alexei Murygin after his record-breaking antics last term. But the team has also lost some of its miserly defense, getting drawn into several high-scoring clashes over the course of the campaign. The arrival of Jakub Nakladal midway through the season has helped, but a deep run into the playoffs could depend on allowing fewer goals.

For Dinamo, meanwhile, a 105-point haul represented its best ever KHL regular season. The team also features some players with experience of going deep into the playoffs on teams that weren’t highly fancied before the puck was dropped. Matt Ellison is a familiar figure around the KHL, but the best season of his prolific career came at MVD when he helped Oleg Znarok’s underdog to the Gagarin Cup final. It was a similar story in 2014 for Marc-Andre Gragnani, a Canadian defenseman. He was part of the Lev Prague team that threatened to be the first team to take the Gagarin Cup outside of Russia’s borders. Both have enjoyed solid seasons in Belarus as head coach Craig Woodcroft assembled a team that looks like a dangerous outsider in this year’s playoffs. 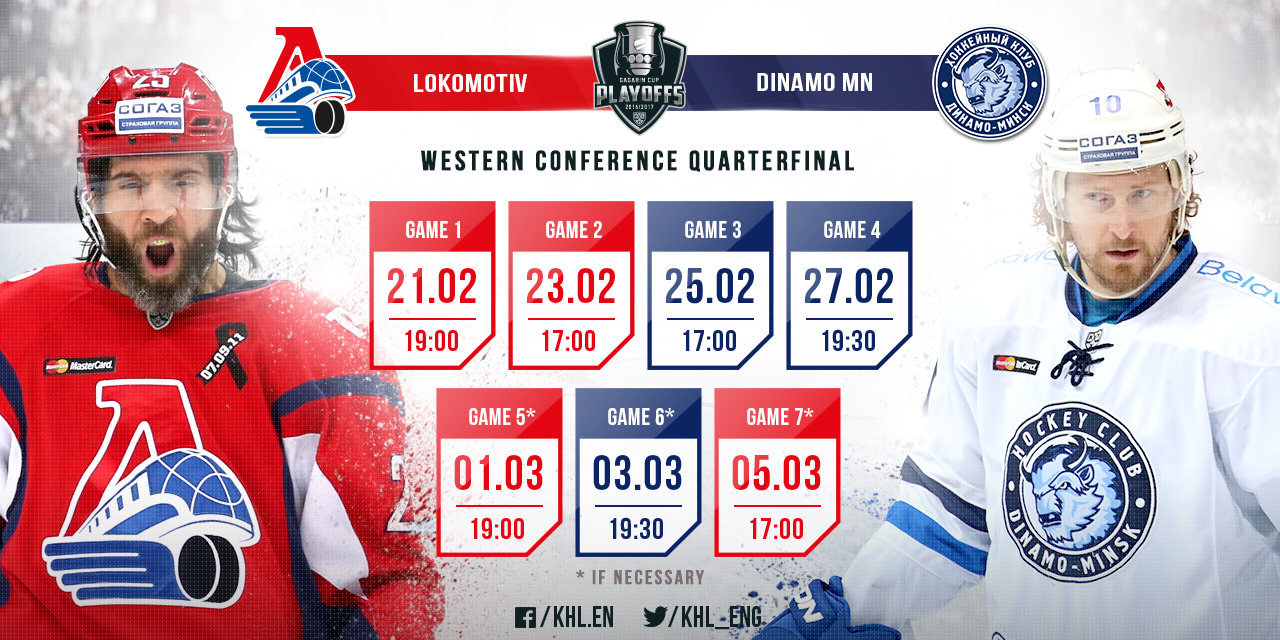