Today in Krasnoyarsk, as part of the International Ice Hockey Federation project, the Global Girl’s Game, the local women’s hockey team, Biryusa, took on Tornado of Moscow Region. It was officially a regular season battle between the bronze medalist (Biryusa) and the reigning champion (Tornado) in the Women’s Hockey League (WHL), but more significantly it was the first time that Russian women’s teams had defended the colors of the Whites and the Blues in the international round-the-world contest.

For those not familiar with this massive event, it begins at the end of the world, or Dunedin, on the south-eastern coast of New Zealand’s South Island, from which it continues in 39 countries across several continents before finally finishing in Canada. Each match is between the Whites and the Blues, with the total aggregate score determining the winner of this worldwide marathon match-up.

This Siberian episode was Part Six of the contest, with Biryusa representing the Blues and Tornado fighting for the Whites.

The game was a treat for the spectators, as it featured almost all the students from the Team Russia roster which recently captured gold at the World Winter University Games in Kazakhstan, and for those not lucky enough to attend, it was broadcast on the international Olympic channel.

Among those attending was 100-year-old Klaudia Trofimovna Cherkasova, not merely one of the oldest residents of Krasnoyarsk, but also the proud great-grandmother of one of the Tornado players, Alyona Starovoytova. Other guests included soccer players from Krasnoyarsk’s Yenisei Football Club, fresh from celebrating promotion in the Russian championship. 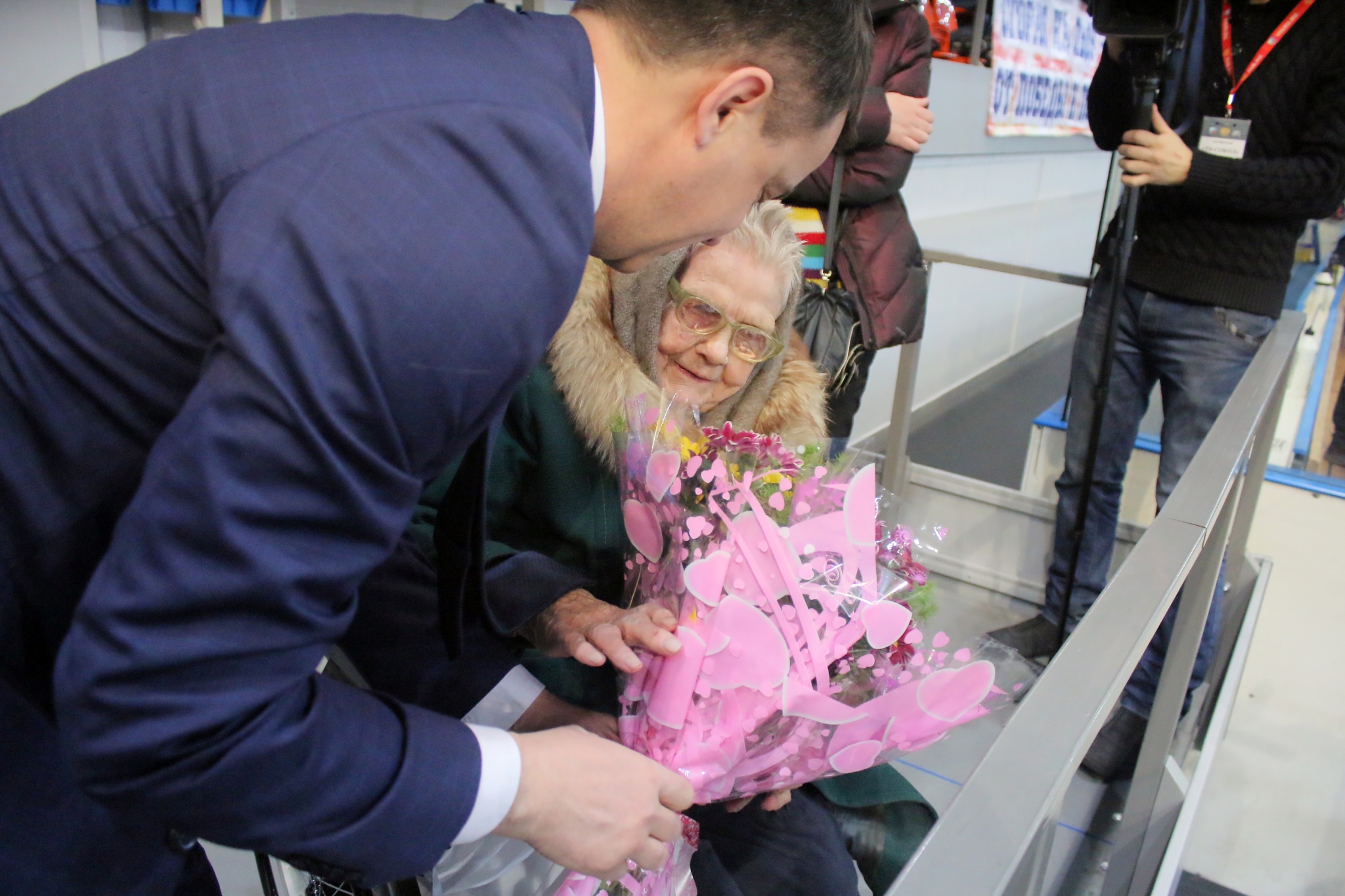 The first period got off to a blistering start, with Torpedo on the offensive and Nadezhda Morozova having to make a series of saves in the Biryusa goal, but the hosts had to rely on sheer luck when Lyudmila Belyakova found herself clean through but contrived to scoop the puck over the crossbar. The women of Dmitrov continued to dominate, and the pressure eventually told in the 12th minute when Aleutina Shtaryova deftly flicked the puck past Morozova into the bottom corner. Three minutes later, the plot thickened: Biryusa’s Lydia Malyavko emerged from behind the goal and sent a pass to Yekaterina Dobrodeyeva who promptly shoveled the puck home to level the score. The momentum was now with the hosts, and just before the first interval Yelena Podkamennaya had a chance to put her team in front, but failed to get the necessary power on the shot.

The tables were turned again a mere two minutes into the second stanza, when Lyudmila Belyakova bore down on the Krasnoyarsk goal, and after her first shot was saved showed gritty determination to belt home the rebound. 2-1 to the visitors. The remainder of the period was a feast of swashbuckling end-to-end hockey, but thanks to superb performances from Morozova and her counterpart in the Torpedo goal, Nadezhda Alexandrovna, the scoreboard operators remained untroubled. 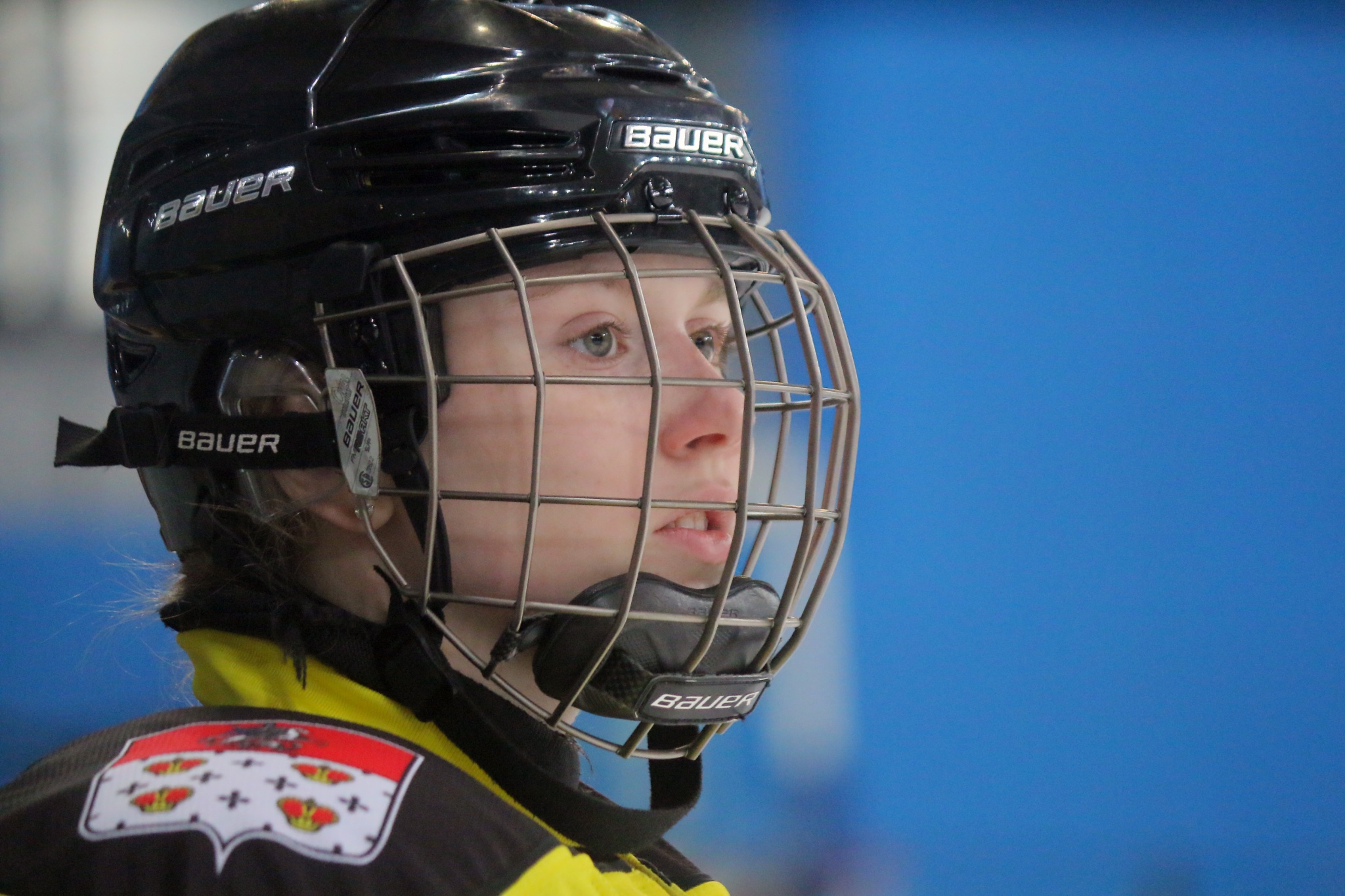 Such a frantic tempo could not last forever, so perhaps inevitably the third period began with a spell of relative calm/ However, in the 46th minute there was a bolt from the blue, or, to adjust the cliché, a thunderbolt from the Blues, in the form of a beautiful long-range shot from Anna Klimkina which sailed into the Torpedo net. All square at 2-2!  The shock leveler stung the Moscow Region women into action, and the hosts were pinned back by wave after wave of marauding attacking play, to the extent that for long spells the Blues could not break out of their own zone to relieve the pressure. In the 55th minute, the hosts had some respite with a powerplay, but they failed to seriously threaten the opposition goal, and it was not long before the magnificent Nadezhda Morozova was again called upon to rescue her team and take the game to overtime.

The added time turned out to be a mini-replay of the previous 60 minutes, with plenty of positive and sometimes cavalier offensive play, but with both goaltenders commendably coping with all that was thrown at them, and it was fitting that the match should be settled with a shootout.

The two Nadezhdas continued to excel but something had to give, and a cool and accurate finish from Torpedo’s Lyudmila Belyakova gave the guests two points to take home from Krasnoyarsk.

And so ended this Russian stage of the Global Girls’ Game. The action now moves on to Bulgaria.

“We are delighted that this regular season match in the WHL will go down in history, and indeed, will also help to create history. We fully appreciated having this opportunity to support these initiatives from the IIHF and to play our part in the development of women's hockey, not only in our country but throughout the world.

The match was broadcast on the Internet, and is part of a vast international project that is bound to raise interest in Russian women's hockey. I am sure that many will be inspired by the performances of our athletes, especially here, today, as we were watching the leading teams in the League.”

“Firstly, I want to thank the Kontinental Hockey League and the Russian Hockey Federation for granting us the honor of hosting the Global Girls’ Game in Krasnoyarsk Region. I really hope that everyone enjoyed the occasion, and I am proud that the festival of hockey was so well organized. Thanks to this event, a wider audience got to see the beauty and charm of women's hockey. I thought Biryusa was a bit unlucky in the shootout, and they really battled on the ice and looked very impressive. I’d like to thank the players and coaches, because our girls played a very tough game today and produced a high standard of hockey.”

“This Global Girls’ Game has an interesting format, and of course we are very proud to become part of the history of the event as the first in Russia to take part. In every game, we try our best to prove that Tornado is the strongest women’s team in Russia, but not everything went our way today. We had the upper hand, but we were unable to turn that domination into goals. Games can turn in an instant, and if players do not take their chances we can be punished for it. I’m not completely satisfied with the victory, but I will not criticize my players. We will sit down and get to grips with why we missed so many chances. It may be that fatigue is taking its toll, and we were also missing three players today. Also, confidence can slowly turn into overconfidence.”

“It's nice that we helped to put Krasnoyarsk in the history books, and even though we lost, we still did our bit for the Blues.

As for the match in the context of the regular season, the result was not a failure. We did fail to take our chances, twice when it was 2-on-1, and you have to score in those situations because they do not come up very often. If we’d scored when we should have done, then the whole shape of the game would have changed. Nadezhda Morozova played superbly well, of course, and the shootout is a lottery.”

“The fact that the match was part of the Global Girls’ Game added a certain responsibility, as does any game. You always need to win and you strive to help your team to victory, whether you are at home or on the road, and no matter which team you play against. We must always please the fans, and it was good to see so many in the stands, even if they were not all supporting us. It was an interesting match, albeit tough at times. We had a lot of chances and we failed to take most of them. Today we certainly had a harder time than usual. For us, it does not matter how many people watch the match: one person or several million. We still fight in each game and we give everything we’ve got.”

“We had a good rest after the last two games and today we played really well. It was great to play in the Arena Sever but it added a bit of pressure. Whatever the stadium, I must do my job: catch and save shots. I know some of the Tornado players from my Russia national team duty, so I had some idea of how they would shoot. On the ice you can have no friends. We give our all for our team and battle for victory. Russia is Russia and your club is your club, and never the twain shall meet.”