An Epic Journey from Red Square to Ufa.Magic Moments from the All-Star Game

Red Square as a stage, Yashin against Jagr, Mozyakin smashes records, Morozov and Kovalchuk’s ice dance, Wolski’s blazing stick, Gusev and Datsyuk dazzling in the shootout – in the run-up to the Week of Hockey Stars 2017, we cast a nostalgic eye over some of the most memorable moments in the short history of the Kontinental Hockey League All-Star Game.

The KHL All-Star Game has always enjoyed pride of place on the hockey calendar, and while it keeps the traditional core of a contest between the finest hockey players in all Eurasia, the format has always featured bold and exciting innovations. Fans have relished the chance to witness titanic contests between teams boasting the best of the best: captain Alexei Yashin’s men taking on those commanded by Jaromir Jagr, Sergei Fedorov locking horns with Sandis Ozolins, and then East-versus-West in the battles of the Conferences. In January of 2017, in Ufa, capital of Bashkortostan, the KHL will present yet another innovation. Four teams will take to the ice – one for each Division of the League – and we hope the added intensity of a mini-tournament will add further spice to this star-studded festival of hockey.

The Kontinental Hockey League management chose a novel format for the first All-Star Game. Onto the ice marched two teams of the most renowned players in the KHL, with the best Russian players lining up for Alexei Yashin’s team while the finest of the League’s Foreign Legion were captained by Jaromir Jagr. The stage for this drama was Red Square, so the backdrop included the Kremlin, St. Basil's Cathedral, and the famous GUM building, and the hockey was as good as the august surroundings. Team Yashin enjoyed a convincing 6-1 win in the Master Show, but Team Jagr exacted revenge in the main event and secured a 7-6 victory, thanks in no small part to a Marcel Hossa hat-trick, The Slovak’s treble included the first ever All-Star Game goal and the event’s first ever game-winner. For the Russians, Sergei Mozyakin and Oleg Saprykin each recorded a double, and there were two points (1+1) for Alexander Radulov. 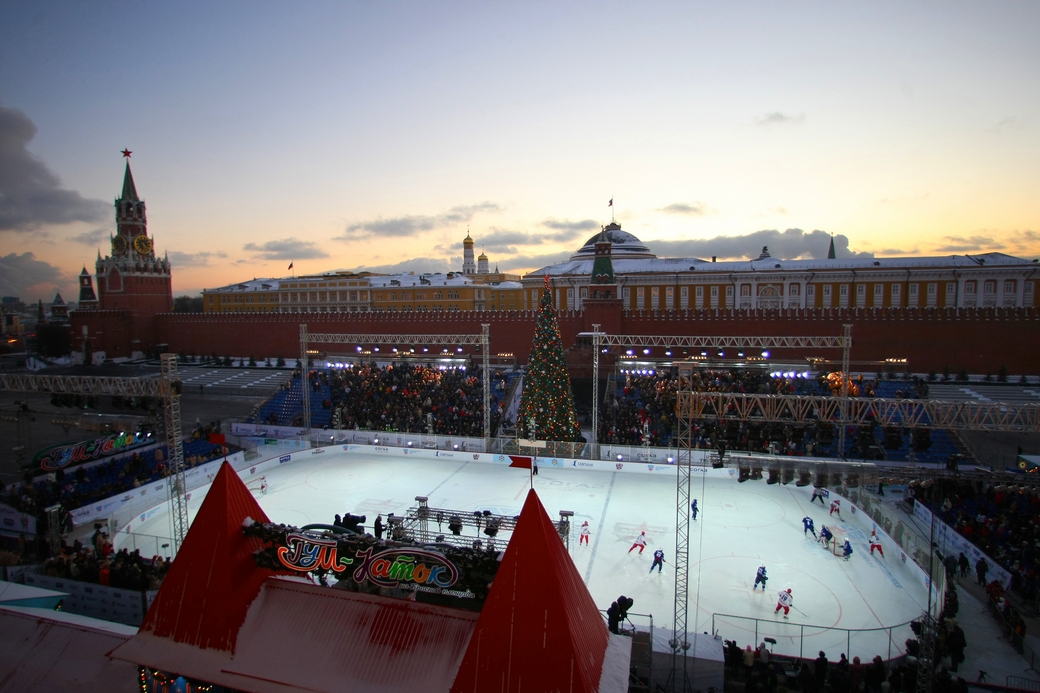 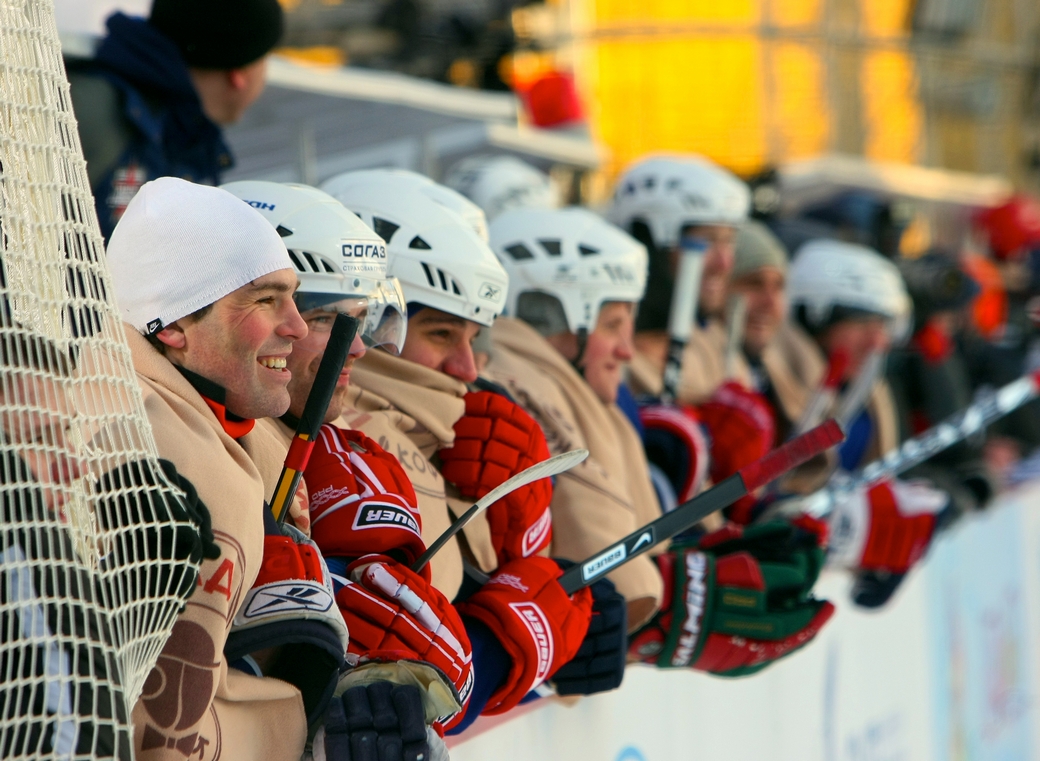 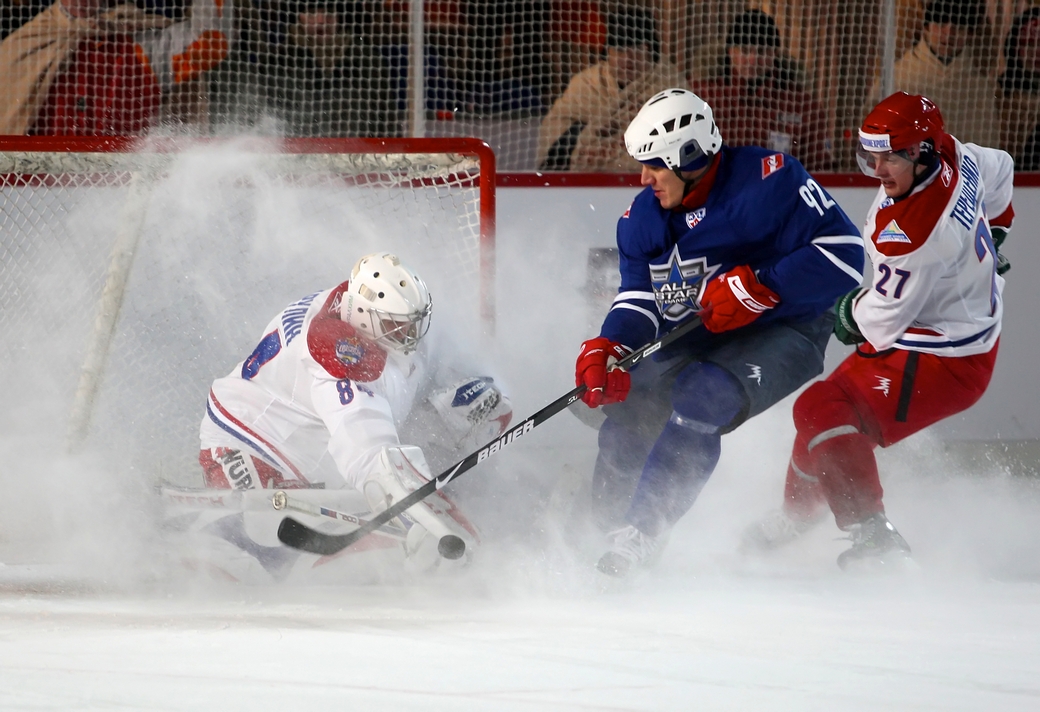 The following year saw the All-Star Game venture beyond Russia’s borders, with the same format but on a much grander scale. With scarcely a single free seat in the 15,000-capacity Minsk-Arena, the Belarusians saw history repeating itself - Team Yashin kept the upper hand in the Master Show, winning 5-3, while the All-Star Game was an 11-8 triumph for Team Jagr, helped by 4 points apiece from Jiri Hudler (3+1) and Captain Jagr (1+3) plus two goals from Patrick Thoresen. For Team Yashin, there were 4 points for defenseman Anton Babchuk (1+3) with Maxim Sushinsky the pick of the forwards with 3 points (2+1). 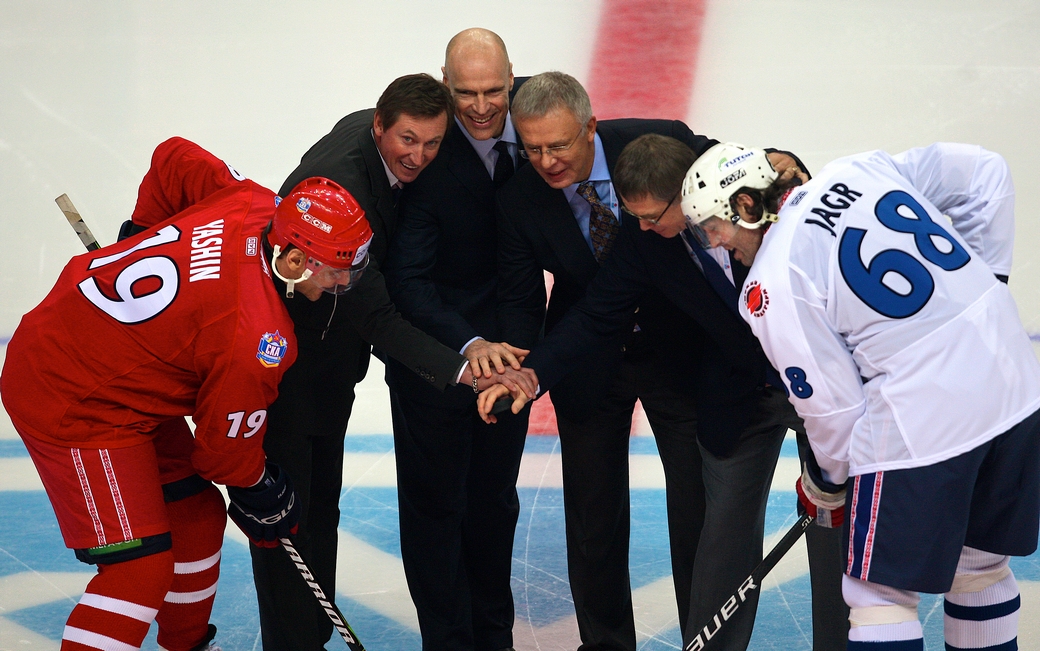 For the 2011 contest, Yashin and Jagr retained their places as team captains, but now the game was a battle for supremacy between the Eastern and Western Conferences. This format continued for 6 years, with the West on top by 4 victories to 2, played out in a tourist’s dream of varied and romantic venues. Saint Petersburg, Riga, Chelyabinsk, Bratislava, Sochi, and once again, Moscow.

It may come as a surprise to some, but the all-time top scorer in KHL All-Star Games, and the only man to have who participated in all 8 matches, is Metallurg Magnitogorsk captain Sergei Mozyakin, with 30 points (22+8). Sergei’s record seems safe for another year – of those still plying their trade, his closest rival is Ilya Kovalchuk, the third-highest All-Star Game scorer, with 12 points (8+4). In the appearance rankings, Alexander Radulov is in the runner-up spot (7 games), followed by Kevin Dallman (5) and Ilya Nikulin (5). The oldest player to ever appear in an All-Star Game is goalie Dominik Hasek, who made his appearance seven days after his 46th birthday, while the youngest was Evgeny Kuznetsov (18 years, 8 months and 17 days). On two occasions the All-Star Game featured a Most Valuable Player award. In 2012 the prize was shared by Sergei Fedorov and Sandis Ozolins, but the year before it was a one-man contest – another accolade for Sergei Mozyakin, thanks to his 7 points (5+2). 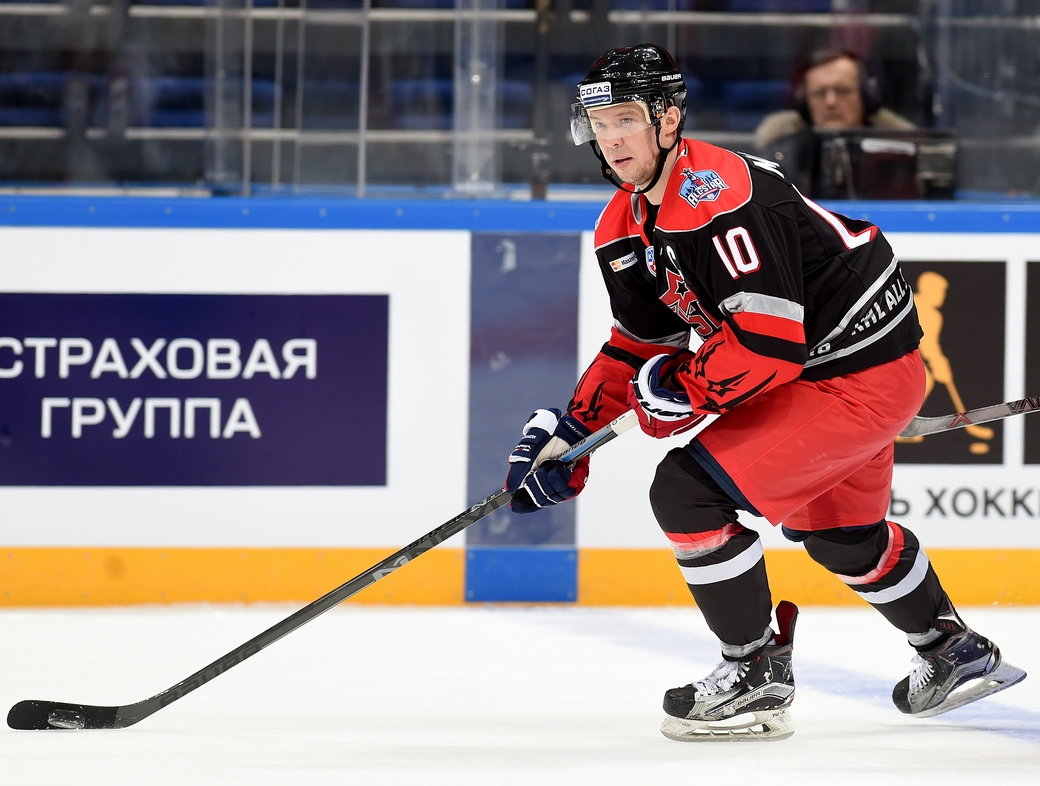 Not all the event’s records belong to the Magnitogorsk superman. For example, in 2012 defenseman Alexander Ryazantsev smashed Zdeno Chara’s Hardest Shot world record with a mighty effort clocked at 183.67 km/h (114.13mph), Denis Kulyash and Janne Niskala occupy 2nd and 3rd places, respectively, in this ranking. In 2015 Spartak D-man Matthew Gilroy recorded the most accurate shooting of all time, with 4 hits in 4 attempts, while Alexei Morozov, Chris Simon, and Deron Quint have all struck 4 targets in 5 tries. The same year, Wojtek Wolski posted the fastest lap time (13.178 seconds), breaking the previous record set in 2014 by Milan Bartovic (13.48 seconds). Brandon Kozun takes the bronze place among the speed kings, having recorded 13.548 seconds during the 2016 event.

The festive atmosphere at the All-Star Game is what really captivates the public, and not merely the lucky few inside the stadium. The sublime dance moves displayed by Ak Bars goaltender Konstantin Barulin in 2013 over 300,000 views on YouTube.

Balletic Barulin provided an encore in response to public demand, but the highlights are not all so athletic in nature – who could forget Mihail Anisin serenading the audience in Riga with a brilliant rendition of the Neapolitan classic, O Sole Mio?

In Chelyabinsk, Alexei Morozov and Ilya Kovalchuk were in hockey skates and gear, but the performance was another borrowed from the arts world - an unlikely but impressive figure-skating display, complete with valiant attempts at triple toe-loops and double axels. In 2012, the captains ' contest was between Sergei Fedorov and Sandis Ozolins, but the two legends had no chance to rehearse the necessary moves, as the various trials - including pool, bowling, and golf – were kept secret until the very last minute.

All the fans eagerly await the Master Show, as it allows us to fully appreciate the individual speed, strength, and skill of the stars of what is otherwise a team game. There is no finer example than Nikita Gusev’s spectacular performance in the 2015 shootout against Stanislav Galimov.

Some thought they’d witnessed a genuine miracle in 2012 from Vladimir Tarasenko, who appeared to use supernatural means to make the puck follow a fiendish route in his shootout goal. The mystery was solved a while later, but it does not detract from the artistry and mastery of the stunt.

Tarasenko explained everything to KHL-TV: “We had the idea when we held a fun competition at HC Sibir. Our coach, Dmitry Yushkevich, just drilled a hole through the puck, threaded a fishing line through it and tied the line to the stick. It fooled us, too. I called the old man yesterday and said I would try to do the same. I consulted with the guys and they helped, and so did my girlfriend’s father, as she’s a Riga girl. It’s great that we pulled it off.”

Wherever there is skill, beauty and glamor, inevitably there is Pavel Datsyuk. In 2013, the Magic Man was a CSKA man, and he needed no outside aid when bewitching players and fans alike during the Chelyabinsk All-Star Game.

As the name suggest, this event should be about the stars – the players – and this is true most of the time, of course, but not always. The 2015 All-Star Game featured a good-natured but competitive fight between the club mascots. And they even competed in a shootout. In case you are wondering, Barsik the Barys Astana Snow Leopard was the most lethal finisher.

In 2014, the organizers came up with a curious contest to test the coaches’ skill in the legendary practice of computer-hurling. Magnitka boss Mike Keenan showed he was a master of the art, but was narrowly beaten by the SKA Saint Petersburg chief, Jukka Jalonen.

One can never know what to expect during the varied All-Star Game festivities, be it Lokomotiv’s Danil Apalkov helping Leonardo Di Caprio to win the Oscar, or Linus Omark brandishing a burning stick in the shootout, or CSKA goalkeeper Ilya Sorokin producing one of the finest saves of his career during the match itself.

But the main attraction of this celebration of hockey is the goals, resulting from the best combinations, the most accurate and well-timed passes, sublime dribbling – the traditional ingredients which combine to make the All-Star Game.

In devising the festival in Ufa, the Kontinental Hockey League considered the wishes of fans and players in making several changes to the format. The result is the Week of Hockey Stars, to take place from the 15th to the 22nd of January, and will boast stellar sporting contests between the finest masters from the three main leagues in the nation: the KHL, the Youth Hockey League (MHL) and the Women’s Hockey League (WHL).

On Saturday, the 21st of January, is the traditional and highly popular KHL Master Show, and in addition to the old favorites there will be some new and unique events created to test the skill, speed and strength of the League’s finest stars.

The grand finale of the 2017 Weeks of Hockey Stars, on Sunday, the 22nd of January, is a four-team tournament with the star players defending the honor of their Divisions. Each team comprises 11 players - one goaltender, nine skaters and one of the four best players from the MHL Challenge Cup. Fans will be treated to two semi-finals and a final, played to a 4-on-4 format, switching to 3-on-3 if the match progresses to overtime. This innovation has already been warmly received by experts and previous All-Star Game players.

On Monday, the 21st of November, the League launched the official 2017 Week of Hockey Stars website and tickets for the event went on sale.