The clock read 42:36. The scoreline was 3-2 in Dinamo’s favor. It was time to set a new record. Sergei Mozyakin scored his 429th goal in top-flight Russian hockey, moving ahead of Boris Mikhailov’s 35-year-old mark of 428 to move out in front as the most prolific goalscorer of all time in Russian or Soviet domestic hockey.

It was a goal that highlighted the 35-year-old’s predatory instincts: as Jan Kovar collected the puck out on the point, Mozyakin wheeled away from his marker into space at the foot of the circle. Kovar’s diagonal pass picked him out and he swung around to shoot from between the hatchings and shot over Ben Scrivens’ glove to write another chapter in his remarkable personal history – and, no less importantly, tie a game that had been drifting away from the defending champion. 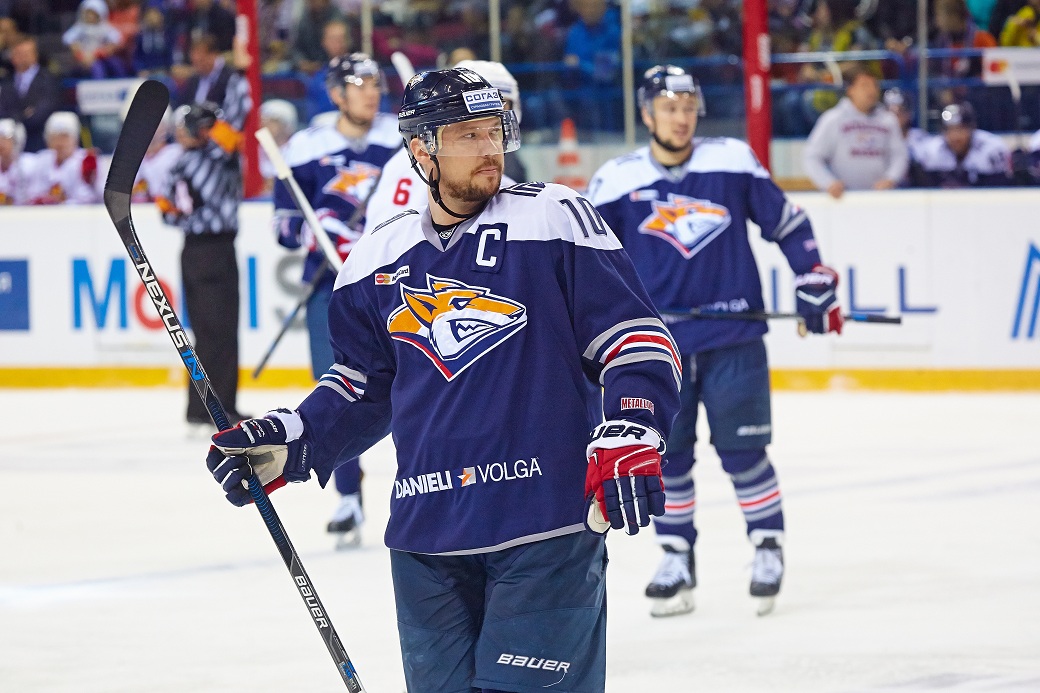 Mozyakin’s golden goal was Metallurg’s second in 32 seconds as the team wiped out a two-goal deficit early in the third period. Then Sergei Tereshchenko put Magnitka ahead for the first time on the night in the 53rd minute. There was still time for a final flourish as the teams traded last-minute goals through Vladislav Kaletnik’s empty-netter and Evgeny Kovyrshin’s last-second consolation, but the day belonged, without question, to Mozyakin.

Earlier Dinamo opened up a 2-0 lead thanks to Alexander Pavlovich and Alexander Materukhin, but almost inevitably Mozyakin got involved to help Wojtek Wolski halve the deficit on a power play midway through the second period. That whetted the appetite for the big moment and Magnitogorsk’s captain was not about to fluff his lines. Typically, it wasn’t just any old goal; throughout his career at CSKA, Atlant and now Metallurg, Mozyakin has specialized in clutch plays. He’s so often been the go-to guy for that game-breaking goal, he’s so often been the team’s salvation in a tight play-off encounter. It was fitting, therefore, that his record-breaking marker came at a vital stage in this game, setting his team on the path to victory after struggling in the early stages.
And so a record that was set in October 1980 – five months before Mozyakin himself was born – finally falls barely a month before its 36th anniversary. With several more years potentially ahead of him, how many more can Mozyakin score … and will any future Russian player come close to this tally in Russian championship hockey?