Pavel Datsyuk’s home debut for SKA was one of the most hotly anticipated events in town – and the Magic Man wasted no time in casting a spell on his new public. It took the former Detroit Red Wing just 30 seconds to get his first KHL goal for his new employer, sparking a rout of Salavat Yulaev.

It was a characteristic finish, on the backhand and from a tight angle, that left visiting goalie Niklas Svedberg floundering on his crease. And Datsyuk wasn’t done: midway through the opening stanza his inviting pass across the face of the net found Slava Voynov and the ex-LA Kings D-man instinctively smashed home a one-timer.

For SKA, so disappointing in the opening game at Traktor, the performance and scoreline was more in keeping with pre-season expectations; another goal early in the second saw Ilya Kovalchuk open his account for the campaign on the power play. Kovalchuk, scratched from the line-up during last season’s playoffs, took the opportunity to announce that he was back in business this season. He added a second in the 33rd minute and found Sergei Plotnikov on the slot to make it 5-0 just before the second intermission.

The night’s brightest stars combined to make it 6-0: Datsyuk’s pass set up Kovalchuk for his hat-trick – the first in the KHL this season – and left Salavat Yulaev in total disarray. Igor Zakharkin, back at one of his former clubs, at least had the satisfaction of seeing his team get on the scoresheet through Teemu Hartikainen. SKA still had the last word, though, with Nikita Gusev getting a seventh – unusually with no contribution from Datysuk or Kovalchuk this time.

Two of the strongest teams in the Eastern Conference suffered shock defeats against outsiders as Metallurg and Ak Bars went down in shoot-outs to Severstal and Neftekhimik.

Not even Sergei Mozyakin’s 426th career league goal could save the defending champion in the clash of Russia’s steel cities. He tapped in a late equalizer after Jakub Kovar allowed Viktor Antipin’s shot to squirm through his five-hole, but the Czech goalie came up big in the shoot-out to deny Chris Lee and Danis Zaripov. Maxim Trunyov, who had earlier given Severstal a seventh-minute lead, claimed the game-winner.

Ak Bars hosted Tatarstan rival Neftekhimik and looked to have secured a 1-0 victory on Vladimir Tkachyov’s 41st-minute goal, only to be rocked by a late, late equalizer. Igor Polygalov tied the game with just 11 seconds left, Neftekhimik rewarded for defending a face-off at its own end without recalling the goalie.

And the night got worse for the home team in the extras: Swedish forward Richard Gynge scored twice in the shoot-out before Ivan Lisutin saved Fyodor Malykhin’s final attempt to give Neftekhimik the early bragging rights in Tatarstan this season.

Two out of two for Avangard

Avangard made it two wins out of two after a dominant display at home to Avtomobilist. The home side got in front and early on and went on to outshoot the visitor 28-14 as head coach Fyodor Kanareikin continued his successful start to life in Omsk.

Alexander Kucheryavenko got the opening goal – and it was a classic piece of end-to-end play. Kucheryavenko collected the puck in his own zone, passed it from blue line to blue line where Danil Faizullin collected it, and continued his own rush to get on the end of Faizullin’s beautifully placed pass to the far post.

Alexei Glukhov doubled the lead early in the middle stanza, exchanging passes with Pavel Makhanovsky before beating Igor Ustinsky but Avtomobilist got one back at the beginning of the third thanks to Rok Ticar’s first since arriving from Slovan. But hopes of a recovery were extinguished in the 54th minute when Alexander Perezhogin rapped home a one-timer off Maxim Pestushko’s pass to complete a comfortable home win. 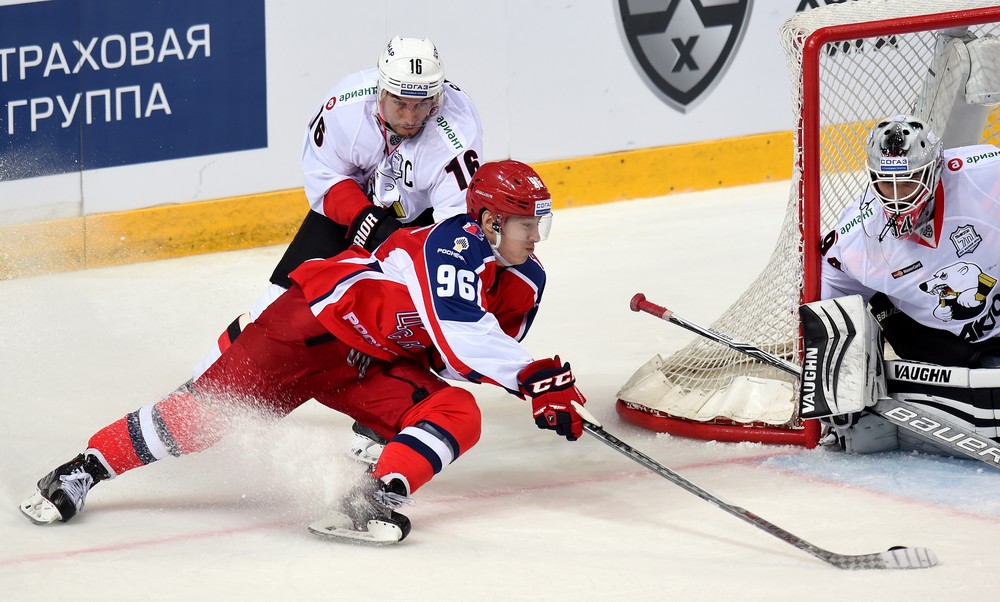 CSKA bounced back from Monday’s Opening Cup defeat in Magnitogorsk to victory on home ice. Traktor had started the season by surprising the other Army Men, SKA, but offered little resistance to Dmitry Kvartalnov’s troops in Moscow.

The game was decided by CSKA’s power play – all three goals came when the host had a man advantage. The first two opportunities went begging in a goalless first period, but Traktor was always under pressure and it was no big surprise when Jan Mursak opened the scoring in the 28th minute as Michal Repik sat out a tripping penalty.

Igor Ozhiganov had an assist on the opener and added his first goal of the campaign to make it 2-0 in the 35th. The scores stayed that way until Kirill Koltsov presented CSKA with another PP opportunity at the start of the third; Stephane da Costa did the honors this time.

It was also a good night for goalie Viktor Fasth. He was pulled during the 3-2 defeat in Magnitogorsk but returned the starting line-up and made 18 saves for his shut-out.

Sibir bounced back from an opening defeat to beat Barys 5-1, with three quickfire goals at the start of the third period setting the seal on the victory.

The home side led 2-1 going into the final stanza but Barys had enjoyed the better of the middle frame, especially once Nigel Dawes made it a one-goal game in the 28th minute. But Sibir’s nerves were settled by a goal flurry. Stepan Sannikov got things moving on 50:25 to make it 3-1 then Barys’ problems with ill-discipline struck once again. Penalties for Roman Savchenko and Alexander Lipin following in short order and Sibir exacted maximum punishment. Sergei Shumakov converted the 5-on-3 power play, then came back 40 seconds later to add a second PP marker.

Earlier Sibir had taken a stranglehold on the game with a goal either side of the first intermission. Evgeny Artyukhin got his second in successive games to open the scoring on 19:29 before Maxim Shalunov made it 2-0 on 20:34. Shalunov went on to add two assists to his tally for the night.

A late goal from Andre Petersson gave HC Sochi a dramatic 3-2 win over Jokerit. The forward had just stepped out of the sin bin when the puck broke for him, sending him one-on-one with American goalie Ryan Zapolski. The 25-year-old Swede won the duel, completing his hat-trick and claiming the game-winner with just 56 seconds left to play. Earlier Jokerit had recovered from 0-2 down. Charles Genoway scored right before the first intermission before Pekka Jormakka tied it up in the 36th minute. But neither Petersson, nor Sochi, were in a mood to be denied. Latvian forward Kaspars Daugavins was a thorn in his countrymen’s side after inspiring Torpedo to a 2-0 home win over Dinamo Riga. Daugavins claimed an assist on Dmitry Semin’s opener in the 22nd minute before wrapping up the points with an unassisted power play goal late on. Ilya Proskuryakov made 23 saves to claim a shut-out in his first game of the season. After failing to score in its opening game, Ugra let rip at Metallurg Novokuznetsk to romp to a 7-1 victory. Five goals in the second period laid the foundations for a convincing win, including two in the 34th minute from Konstantin Panov and Alexander Akmaldinov. Pavel Varfolomeyev and Pavel Medvedev scored two each while Anton Kuryanov was also on target. Kuznya’s reply came in the 52nd minute from Roman Blagoi; earlier Alexander Komaristy missed a penalty shot that would have made it 2-1. Lada got its first win of the season with a 5-2 success at home to Slovan. The Motormen opened up a 2-0 first-period lead thanks to Stanislav Bocharov and Rafael Akhmetov, and everything seemed to be going smoothly when Anton Krysanov made it 3-0 in the 51st minute. But Slovan hit back with two goals in a minute from Jeff Taffe and Jonathan Cheechoo to set up a tense finish. Penalty trouble in the dying moments ended Slovan’s hopes: Nikita Filatov assisted on two power play goals, Alexander Bumagin and Mikael Johansson found the net.