Back in April, Metallurg Magnitogorsk and CSKA served up a thrilling Grand Final. On Monday they meet again to get the KHL season underway.

It’s been a tale of contrasting pre-seasons for last season’s Gagarin Cup finalists. In Magnitogorsk, the champion largely kept its roster together, trusting the players that have won it all twice in three seasons. In Moscow, meanwhile, CSKA faced bigger changes.


The big challenge for Dmitry Kvartalnov and his team will be replacing the talents of Alexander Radulov and Nikita Zaitsev, both of whom have moved to the NHL. The head coach admits that it’s impossible to find direct equivalents for two of Russia’s most talented players and is looking to add greater depth to the roster. That was especially evident during the Mayor of Moscow’s Cup, which ended on Thursday with CSKA taking second place behind Dynamo.


However, that runners-up spot was achieved with a youthful line-up as Kvartalnov offered an opportunity for the brightest prospects in the Krasnaya Armiya youth set-up a chance to prove their worth. The likes of 18-year-old Artyom Chmykhov certainly made an impact, even if it wasn’t enough to lift the cup.


Kvartalnov himself was fairly content with his team’s performances, but offered a caveat. “We still have a few questions before the start of the season,” he said. “We’re still waiting for every player to join the system. Some aren’t ready, some are injured, but everyone should be fit for the opening night.”


That opening night could see a new-look top line of Bud Holloway, Gregg Scott and Dmitry Kugryshev. The two Canadians are new to the KHL, but both have extensive experience of European hockey. Kugryshev is a familiar face and is expected to shrug off an injury to be available for Monday’s game.


The goaltending role at CSKA could also be hotly contested in the coming weeks. Last season Ilya Sorokin, aged just 21, kept experienced Swedish international Viktor Fasth out of the crease for much of the campaign. Fasth, however, has impressed with his form and attitude in the summer. “I’ve been pleased to see that he hasn’t given up and is fighting for his place,” Kvartalnov added. “He really is in good shape.” 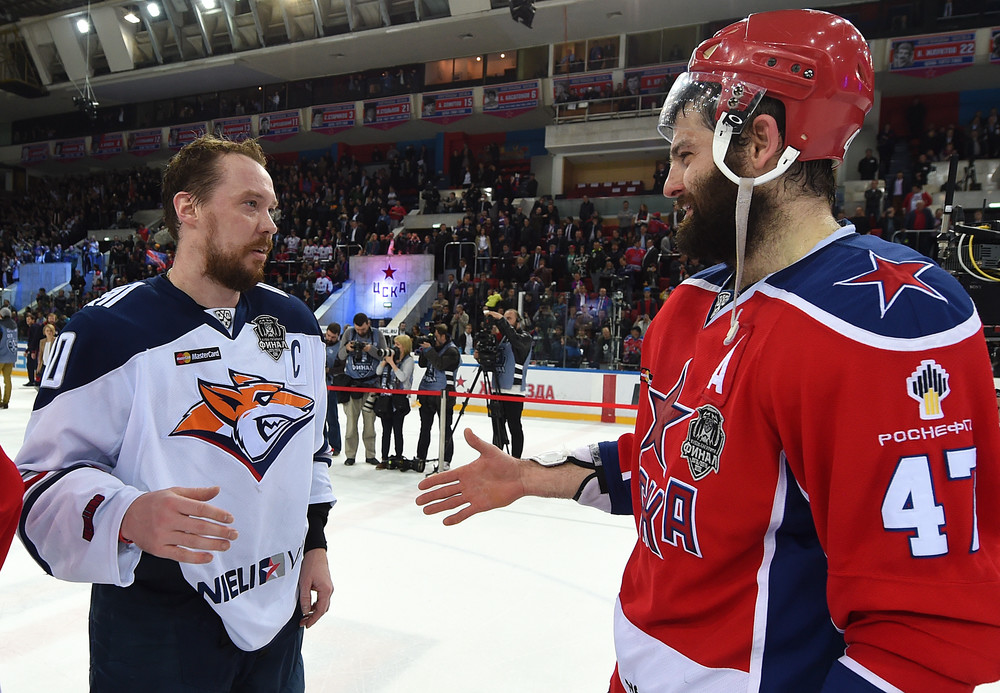 Metallurg’s stars have stayed in place: colorful rumors linking Danis Zaripov with a move to newcomer Kunlun Red Star proved to be nothing more than gossip while his partners-in-crime Sergei Mozyakin and Jan Kovar are also back for a fourth season of terrorizing KHL defenses.


Observers seeking evidence of a post-championship hangover might point to Magnitka’s failure to wrap up pre-season with victory on home ice in the Romazan Memorial Trophy. The team’s back-to-back defeats against Avangard split opinions among Metallurg’s fans; some felt it highlighted underlying problems with the roster, others argued that pre-season is all about shaking off the rust of the summer months and means nothing when the action starts.


Head coach Ilya Vorobyov tends towards the second view. Asked about the “food for thought” served up by Avangard, Vorobyov highlighted individual flaws rather than systemic problems.


“If you give your opponent a goal and that opponent is as strong defensively as Avangard no amount of skill will get you back into the game,” he said after the Omsk teams 2-0 victory in the Romazan final. “And that’s what happened to us here.”