It was a busy and often exciting second half of the week for preseason friendlies, starting on Wednesday, when four games featuring KHL teams and all turned out to be close encounters with a one-goal winning margin.

Avangard and Avtomobilist met in Chomutov, Czech Republic, in what was the first game of the preseason for both clubs. By the halfway stage, Andrei Razin’s Yekaterinburg men had raced to a 3-0 lead, thanks to goals from Timur Shingareyev, Dmitry Megalinsky and Jan Buchtele, but a slight loss of discipline crept in. Andrei Kuteikin and Dmitry Maltsev took full advantage of the resulting penalties, ensuring a nail-biting finale, but Avtomobilist held on to clinch a 3-2 win.

Ugra and Dynamo Moscow met in Belarus, and old friends featured heavily in this friendly: a double from Lukas Kaspar against his former club enabled the Muscovites to claim a 2-1 win, and the Khanty-Mansiysk men’s sole reply came from Konstantin Panov, once of Dynamo.

The highest scoring game of the day took place in Leninsk-Kuznetskiy, Siberia, where Metallurg Novokuznetsk fought back twice came from behind against Sibir to claim a thrilling 4-3 win. Andrei Karavayev, Kirill Lebedev, Kirill Semenov and Nikita Yazykov were on target for the Blacksmiths, while Vladimir Butuzov (2) and Alexei Skabelka replied for the Novosibirsk team.

Thursday also saw four games with teams from the League in action.

Kunlun Red Star made the short trip from its base in conducting collection in Finland from its base in Vierumaki to Espoo for the second friendly in the team’s history, this time against Spartak, but the result was the same as in the first – a 2-0 loss for the Chinese club. The men from Beijing did keep the Muscovites at bay for forty minutes, before two goals from Sergei Shmelyov brought victory to German Titov’s Red-and-Whites. Sterling work from Nikita Bespalov in the Spartak goal ensured that Vladimir Yurzinov’s men are still searching for that elusive first goal. 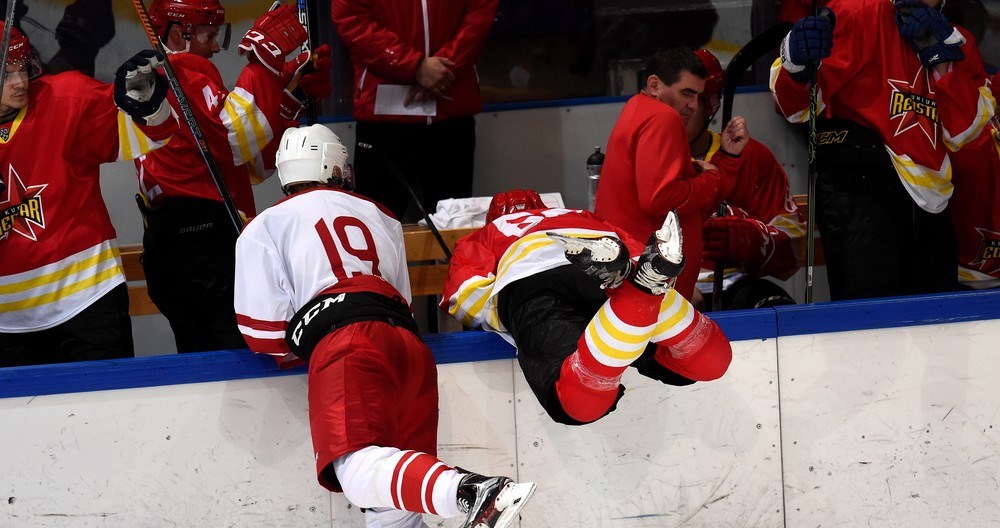 Over in Kazan, Ak Bars hosted Neftekhimik in the Tatarstan derby. Regulation time ended with each team having scored a powerplay goal (Vladimir Tkachyov for Kazan; Konstantin Makarov for Nizhnekamsk) and Richard Gynge made it 2-1 in favor of Neftekhimik in the shootout.

In Belarus, Dynamo Moscow played its third game in three days, but there was little sign of fatigue as the Muscovites sealed a third straight victory. This time, Sergei Oreshkin’s men won 5-4 in a lively encounter against Yunost of Minsk, thanks to a double from Daniil Tarasov and a goal apiece for Nikolai Vladimirov, Ilya Baranov and Dmitry Vishnevsky.

Thursday’s fourth friendly was played in Latvia, where goals from Anton Krysanov and Ramil Suleimanov gave Lada Togliatti a 2-0 win over Toros.

Preparations for the IX season stepped up another gear on Friday, with no fewer than thirteen KHL teams in action in eight friendly games played at various venues around Europe

In Moscow, CSKA and Admiral met for their first outings of the preseason. CSKA General Manager Sergei Fedorov was critical of the playing surface after a far from exciting regulation time ended 1-1, with Gennady Stolyarov putting the Army Men in front and Mark Skutar replying for the Far East team. Andrei Svetlakov gave CSKA victory in the shootout.

On the shores of the Black Sea, HC Sochi exacted sweet revenge on Severstal for the 2-5 defeat at the hands of the Cherepovets men on July 23. This time, the southerners triumphed 4-3. Oscar Fantenberg, Ivan Zakharchuk, Pavel Padakin and Alexander Titov were the men on target for Sochi; Severstal replied through Nikolai Kazakovtsev, Sergei Kuptsov and Evgeny Mons.

In the Czech Republic, Avangard faced off against the local team, Chomutov, in an attempt to bounce back from Wednesday’s 2-3 defeat at the hands of Avtomobilist. In the event, this game proved even more disappointing for the men of Omsk as the Czechs triumphed 3-1.

In Belarus, Ugra shared Avangard’s pain, also going down 3-1, with the damage inflicted by Dinamo Minsk. Nick Bailen, Nikita Ustinenko and Ilya Shinkevich hit the back of the net for the Belarusians, while Vitaly Shulakov scored for the Khanty-Mansiysk men.

In the Latvian capital, Dinamo Riga welcomed Sibir, but the men from Novosibirsk may have sensed a certain lack of hospitality following their long journey. The Latvians triumphed, 2-0, with Edgars Kulda and Oskars Cibulskis grabbing the goals.

In Plzen, Czech Republic, the home side provided the opposition for Avtomobilist, and the visitors responded with a resounding 6-2 victory. There was a double for Denis Mingaleyev and a goal each for Yegor Zhuravlyov, Alexander Torchenyuk, Nikolai Timashov and Alexander Romanov.

The same score, 5-3, was recorded by Vityaz in a lively win over the Italian national team. Roman Horak (with a double), Alexei Makeyev, Alexei Kopeikin and Igor Golovkov scored for the Moscow Region side.