Two points from Chris Lee, two goals from Evgeny Timkin and 36 saves from Vasily Koshechkin saw Metallurg Magnitogorsk to a victory that sealed its second Gagarin Cup in three years. 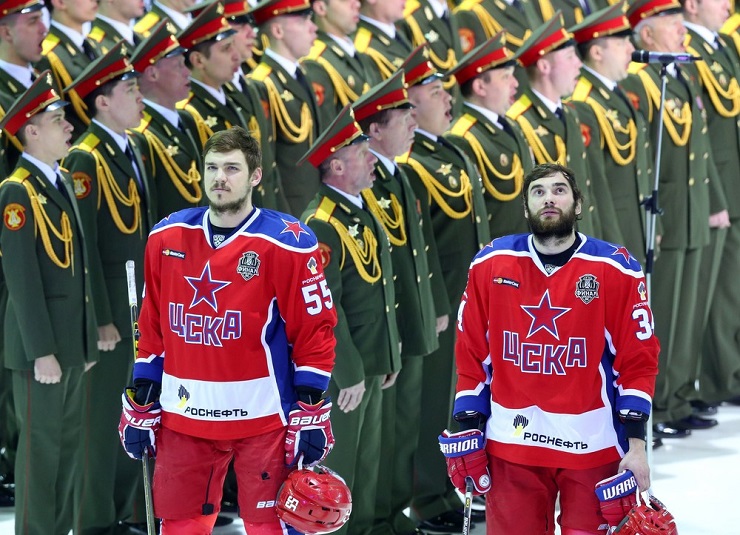 The visitor weathered a storm of pressure from CSKA but delivered a fine display of counter-attacking hockey – including a goal with its first shot of the night on 12:55 – to shatter the Army Men’s dreams of winning the playoffs for the first time since 1989 and completing a sweep of all three trophies up for grabs this season.

Instead, Lee’s 39th-minute goal proved decisive. CSKA had tied the game just three minutes earlier, but home joy was shortlived. Lee, whose first-period assist silenced the crowd, repeated the trick when he unleashed a one-timer between the hatchings off a Jan Kovar pass from behind the net. 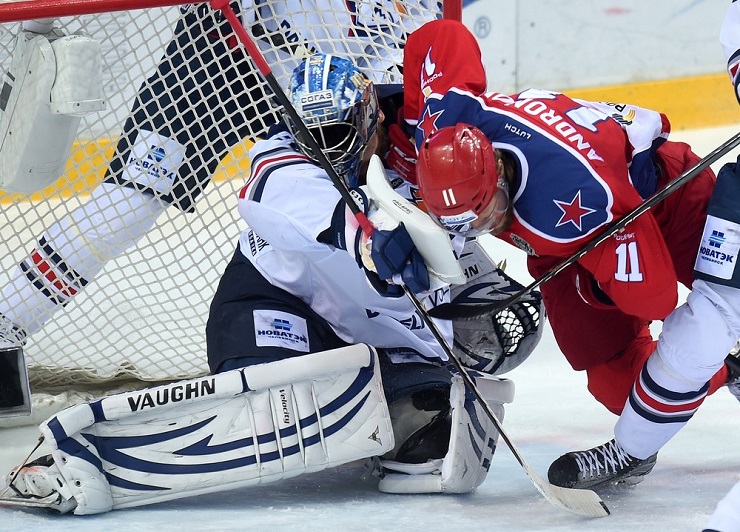 There was still 20 minutes of hockey to play, 20 minutes for CSKA to save its Gagarin Cup dream. But the home team found no way past Koshechkin, a veteran goalie playing out of his skin to steer his team to the big prize. He produced the saves demanded of him by Stephane da Costa, Maxim Mamin, Geoff Platt and Vladimir Zharkov before an empty-net goal from Timkin sealed the victory in the last minute.

That set another clutch of Gagarin Cup records. Metallurg head coach Ilya Vorobyov, at the age of 41, becomes the youngest man to coach a team to the big prize. He is also the first person to take over behind the bench part way through a season and go on to win it all, reawakening the championship skills of the roster he inherited from Mike Keenan. 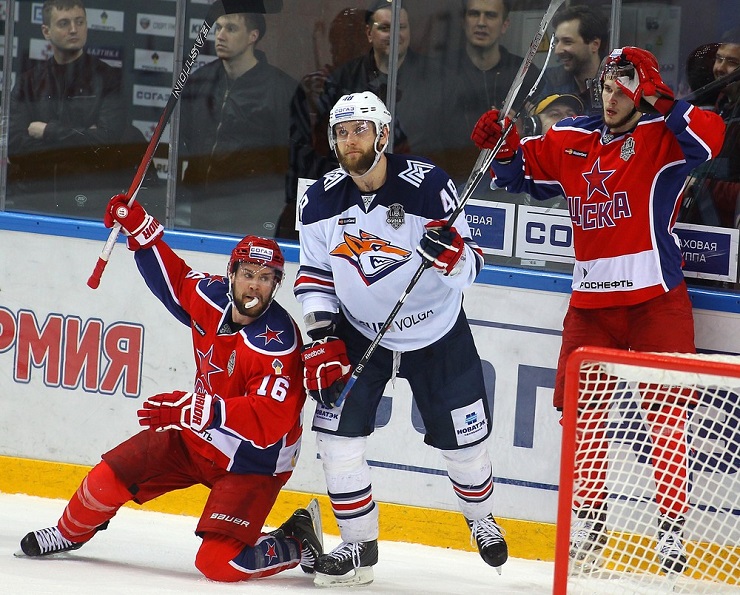 Many of that roster pick up their second winners’ medals: captain Sergei Mozyakin among them as he finished as the top post-season scorer with 25 (11+14) points. Forward Danis Zaripov, unusually out of the points in this game, gets his fourth Gagarin Cup winner’s medal. He won with Metallurg in 2014, and also helped Ak Bars to victory in the first two editions back in 2009 and 2010 (albeit only featuring once in post season in that second victorious campaign).

But Metallurg’s triumph left CSKA distraught after a playoff campaign in which it seemed peerless until the final hurdle. Having lost just one game in three series to reach the final, Dmitry Kvartalnov’s team struggled with Metallurg’s ability to disrupt its play and slow the game down – and today’s first period illustrated the point more clinically than usual. 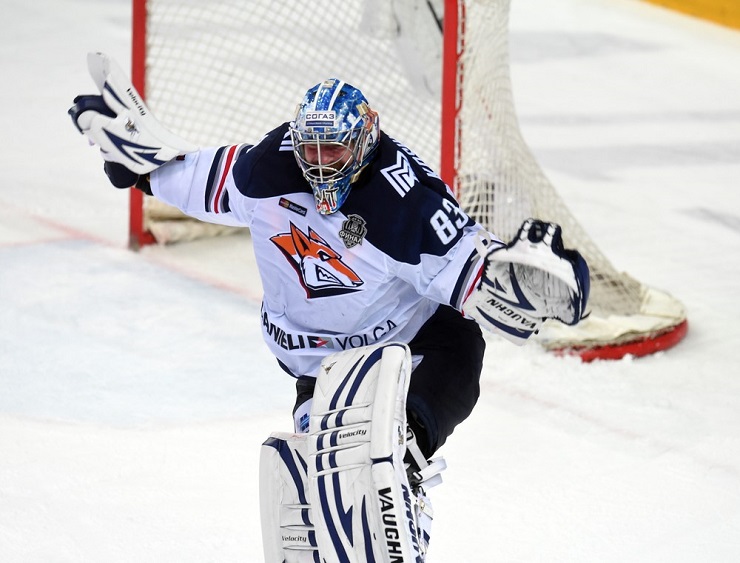 CSKA had much the better of the opening stanza – but apart from one clear shooting opportunity for Alexander Radulov after an early defensive error the home team struggled to really get inside the opposition.

And then, with Magnitka forced to play on the counter, Chris Lee demonstrated how to conjure a goal out of nothing. The defenseman collected the puck in his own end and produced a sublime pass, slicing through CSKA’s skaters and opening up half the ice for Evgeny Timkin to go one-on-one with Ilya Sorokin and beat the home goalie with the first shot he faced on the night.

CSKA continued to press – the shot count would read 13-2 at the first intermission – but the clearest opening fell to the lively Mikhail Yunkov off a Simon Hjalmarsson pass and the former Metallurg man saw his shot blocked by Koshechkin.

In the middle session the action moved closer to Koshechkin’s net as CSKA worked harder to get the puck into the danger zone. Scrambles on the slot were commonplace: Stephane da Costa went close, Yunkov saw another shooting chance go begging, Radulov worked from behind the net to prompt an almighty scrimmage in front of the target.

As the pressure mounted, the big moment came: CSKA tied the game with a goal reminiscent of the breakaway that gave Metallurg the lead. Maxim Mamin was the home team’s hero, firing home the rebound after Bogdan Kiselevich’s pass set up Geoff Platt for a shot that Koshechkin could only pad away into the danger zone. 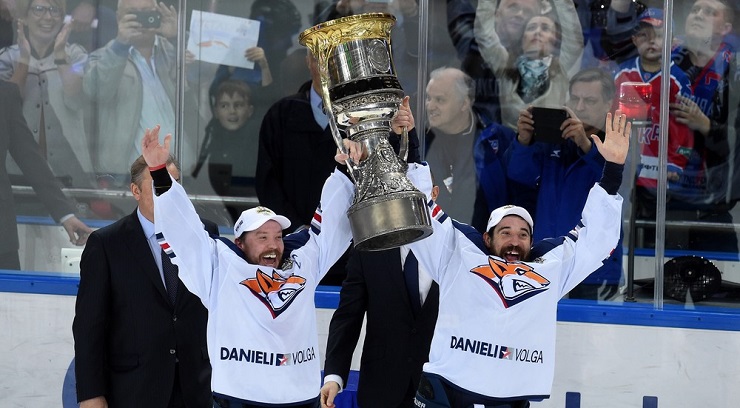 It felt like a decisive shift to everyone in the stadium – except for the men from Magnitogorks. Parity proved short-lived: Chris Lee gave Metallurg the lead once again even before the home fans had finished celebrating their equalizer. The veteran D-man thumped home a one-timer from between the hatching off a pass from Jan Kovar behind the net.

Timkin’s late marker put a ribbon on the final scoreline, and the celebrations stretching from Moscow right the way back to the southern Urals, could get underway in earnest.