Metallurg’s Captain Marvel, Sergei Mozyakin, struck two vital goals as his team came from behind to snatch a huge victory in Moscow and move to within a single game of lifting the Gagarin Cup for the second time.

Mozyakin tied the scores with just over five minutes to play before grabbing the winner in overtime after CSKA’s Roman Lyubimov failed with a penalty shot on 58:18.

Once again the KHL’s all-time leading scorer was both architect and executioner of the winning goal. He won the puck in center ice, exchanged passes with Jan Kovar in the CSKA zone and then squeezed home a shot from a tight angle to beat Ilya Sorokin and send Metallurg back home to Magnitogorsk with cup glory well within its sights.That prospect seemed unlikely when Lyubimov gave CSKA the lead early in the third period. After a cagey game of attrition, with both teams determined not to offer a decisive error to the opposition, Metallurg may well question exactly what Alexander Semin thought he might achieve when he grabbed hold of Geoff Platt’s stick somewhat needlessly in center ice in the 43rd minute. Magnitka killed the penalty – Vasily Koshechkin pulled off saves to deny Ivan Telegin, Denis Denisov and Stephane da Costa – but the momentum tipped inexorably in the home team’s favor and just six seconds after Semin returned to the game, CSKA went in front. 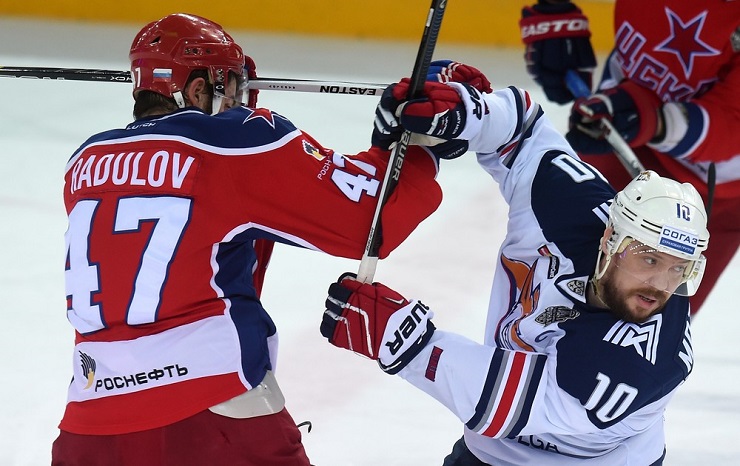 Bogdan Kiselevich led the rush from his own blue line before slipping the puck to the unmarked Lyubimov at the top of the right-hand circle. In a single motion the forward got off a wrist shot, surprising Koshechkin with the speed of his release and finding the top corner to open the scoring.

For CSKA it was the first goal in more than 100 minutes of game time. The relief around the arena was palpable – but short-lived. Within 10 minutes the ever reliable stick of Mozyakin had tied the game and plunged both teams into the agony of overtime. He started and finished a slick move, exchanging passes with Alexei Bereglazov to burst into the offensive zone and launch a wrist shot from behind a defenseman to beat Ilya Sorokin and prolong the battle between two almost inseparable opponents. 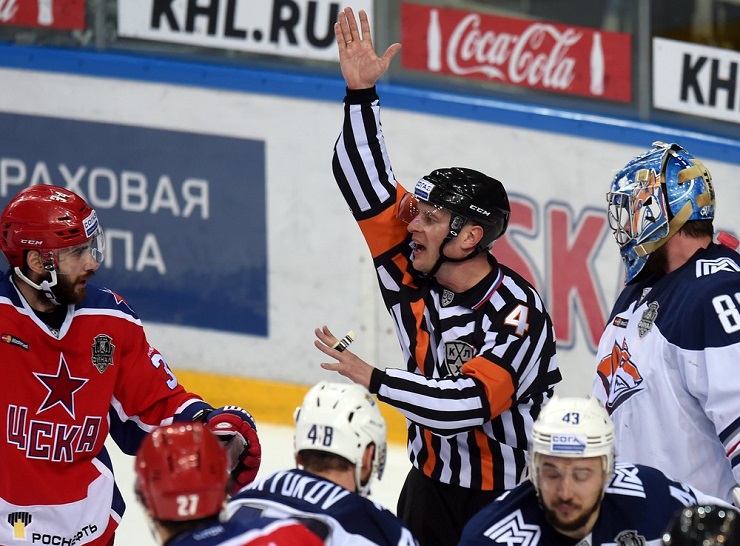 Lyubimov then had a glorious chance to win it for the home team with less than two minutes to play. Platt believed he had scored in open play, but was denied when Viktor Antipin’s flopped over the puck on the goalline. Antipin’s audition for the goalie’s job resulted in a penalty shot. Lyubimov was entrusted with the attempt, but could not find a way past Koshechkin this time and CSKA’s best hope of winning it in regulation was gone.

Prior to that dramatic finale, much of game five proved to be something of a war of attrition. The teams shared just 12 shots on goal in the opening stanza, the host having the slight edge on the counter, and play was hardly more expansive until the midway mark. That was something of a testament to Metallurg’s ability to slow CSKA’s tempo: in previous playoff games the Army Men had maintained a blistering pace, and opponents had been unable to live with it. Now, though, Dmitry Kvartalnov’s team was struggling to dictate the play in the manner it liked best. Both sides would have to wait until beyond the midway mark to start creating clear chances.

Metallurg was the first to show, helped by a penalty called on CSKA’s Platt in the 28th minute. The visitor took up its position in the CSKA zone and fashioned an opportunity for Danis Zaripov, only for the forward to flash a shot just wide of the far corner. Soon after Platt’s return to the fray Magnitka had an ever better look at Sorokin’s net: confusion in the home defense helped Oskar Osala pick out Wojtek Wolski, but his shot drew a fine stop from the young CSKA goalie to keep the scoreline blank. 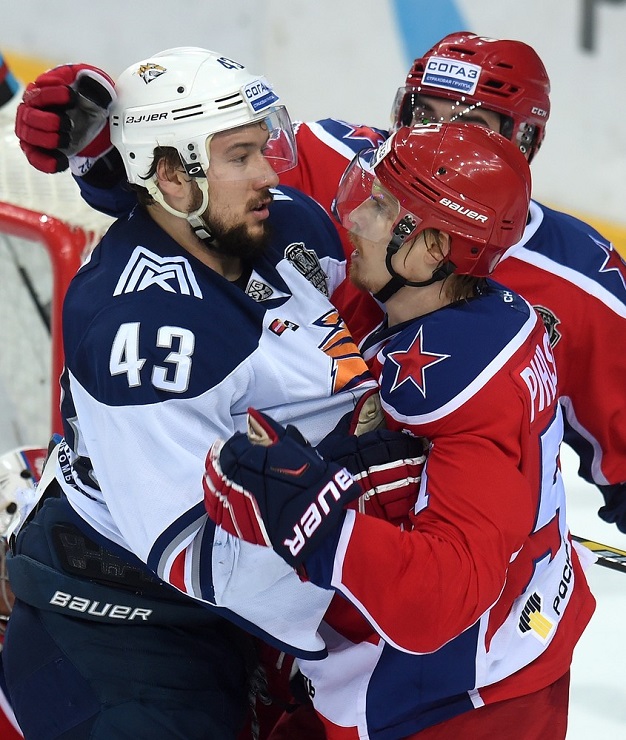 It wasn’t one-way traffic, though. Chris Lee made a last-gasp challenge to halt Igor Makarov as he lined up a shot from a dangerous position. Then, after CSKA had killed a penalty rather more comfortably, da Costa wasted a great opportunity on the slot.

Once in front, CSKA seemed able to exert greater control over the game: a penalty kill shortly after Lyubimov’s marker kept the puck well away from Sorokin’s net and the better chances were falling for da Costa and Antti Pihlstrom. But Mozyakin, as ever, had other ideas and now Metallurg has a big chance to settle the series on Sunday.