There was drama on either side of the 60-minute mark as Sibir forced game four of this series into overtime with a last-minute goal, only for Sergei Mozyakin to give Metallurg the victory 52 seconds into the extras.

Mozyakin claimed his 900th point in senior hockey with the game-winner here, holding the puck as Danis Zaripov’s decoy deceived the home defense, then drifting into a central position to fire the vital goal past an outraged Alexander Salak. The Czech goalie rushed straight to the officials, claiming there should be a penalty called on Magnitka in the build-up to the goal, but Mozyakin’s marker stood and Metallurg takes a 3-1 lead back to home ice for Wednesday’s game five.

Magnitka already thought it had the victory sewn up in the closing stages of regulation time but with just 26 seconds left on the clock when Calle Ridderwall decided to seize the initiative for Sibir, running over Evgeny Timkin and flashing a shot across Vasily Koshechkin and into the top corner to tie the game at 3-3.

It was the second time Sibir had rallied to deny Metallurg. First the home team clawed back a 2-0 deficit after Zaripov, off a Mozyakin assist, and Tomas Filippi seemed to have set the visitor on the way to a 3-1 series lead.

Oleg Gubin got one back deep in the second period before Sergei Gimayev tied the scores in the 45th minute – and celebrated extravagantly after scoring his first KHL goal of 2015-16. Gubin won a face-off in Magnitka’s zone and swept the puck back to the blue line where Gimayev unleashed a slapper that caught Vasily Koshechkin off balance and tied the game at 2-2. 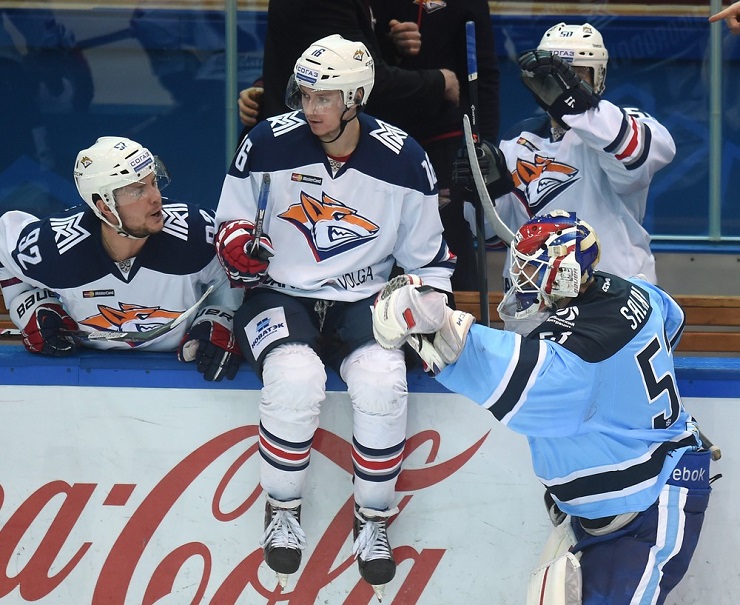 Even then it seemed that Metallurg had quelled Sibir’s recovery when Wojtek Wolski made it 3-2 with eight minute left to play. His strike was a goal worthy of winning the game. Filippi added to his earlier goal when he surged into Sibir’s zone and slung out a pass from behind his back to find Wolski at the top of the circle. A well-placed wrister across the face of Salak and in at the far post did the rest.

In the event, though, Ridderwall denied Wolski the game winner, but Mozyakin still gave Metallurg the win.