A pair of power play goals in the first period set Metallurg on the way to an opening-game victory in this Eastern Conference semi-final clash.

Sibir suffered from penalty troubles early on, giving up two goals in the first six minutes. Alexander Semin was the first to strike, squeezing a shot along the goalline and in off the pads of Alexander Salak in the fourth minute.

Then Mozyakin doubled that lead with what proved to be the game winner, converting the second power play of the game. Cashing in on numerical superiority, Magnitka moved the puck neatly around the zone until Chris Lee’s pass found Mozyakin at the top of the left-hand circle and his one-timer flashed past Salak.

Sibir hit back midway through the second period when Andrej Meszaros skated in from the point, slalomed his way past three challenges and fired in a wrist shot from between the hatchings. That was enough to beat Vasily Koshechkin, back between the piping for Metallurg after missing the opening round through injury. 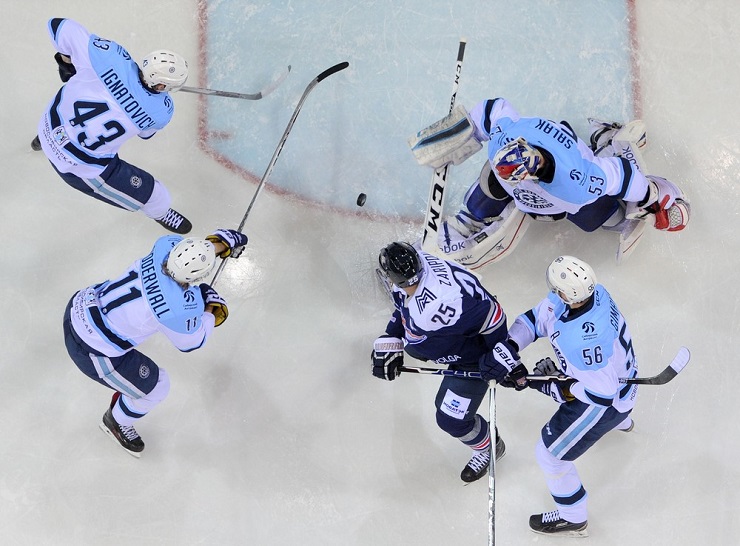 With just one goal in it, Sibir pushed hard for an equalizer in the final stanza. Passions threatened to boil over: visiting captain Alexei Kopeikin was ejected after contesting a refereeing call rather too vigorously for the officials’ liking. As the pressure mounted, Semin took a penalty to save his team as Viktor Bobrov prepared to deliver a killer pass. Then Koshechkin was called upon to deny the on-rushing Stepan Sannikov following Sergei Shumakov’s defense-splitting pass.

But in the dying seconds Magnitka secured the win thanks to an empty net goal from Semin, securing a lead to open up the series.