Ilya Kovalchuk returned to SKA’s roster after missing most of the series against Lokomotiv, but it was Evgeny Dadonov who masterminded a hard-fought win in Game 1.

Dadonov scored two and his menacing presence on the power play hurried Dynamo goalie Alexander Yeryomenko into an error as Nikita Gusev snatched the game winner midway through the final period. Gusev, the architect of Dadonov’s opener, forced the puck home from close range after Dadonov chased down a clearance behind the net and sowed panic among the Blue-and-White defense as the puck popped up in the slot.

Gusev’s goal ensured that the game’s key moment was the crunching check to the head that Denis Barantsev delivered to Jarno Koskiranta in center ice with the score at 2-2. The D-man was given a 5+20 penalty, dealing a huge blow to his team’s hopes of finding a winner.

SKA struck first with Dadonov opening the scoring on the power play after 10 minutes. Dynamo’s PK got caught out watching the puck and allowed Dadonov far too much time on the slot. Gusev’s pass picked him out and the shot rifled past Yeryomenko. 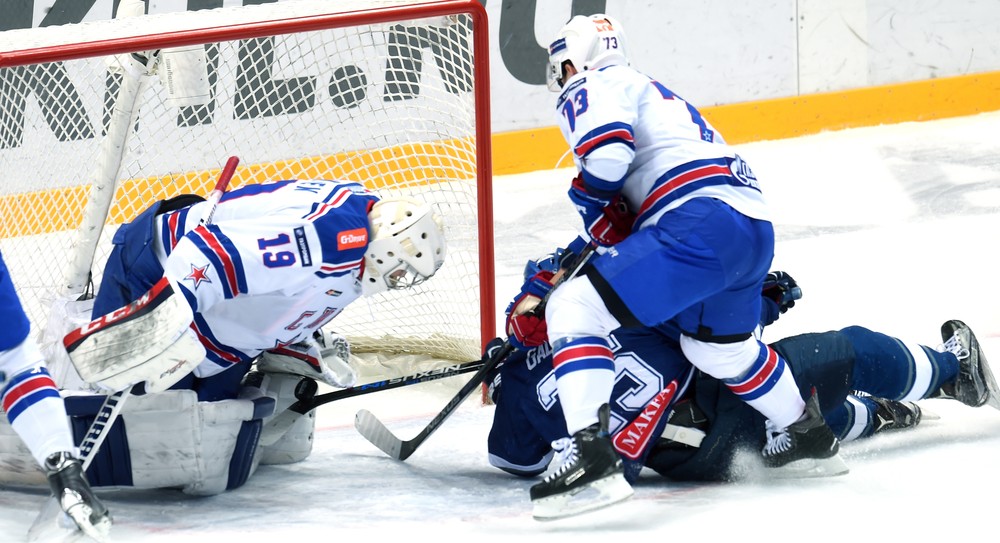 Dynamo continued to press as the opening stanza wound down but SKA came into the game on the back of three successive shut-outs against Lokomotiv and Mikko Koskinen was once again on his game to keep the home team at bay.

His hot streak ended right at the start of the middle session, though, when Andrei Mironov took Maxim Karpov’s pass over the blue line and hit a shot from the top of the circle that clipped the top of Koskinen’s glove on its way into the net.

Dadonov soon reinstated SKA’s lead with a power play goal that resembled his first. This time Vadim Shipachyov supplied the pass as his team-mate found space on the slot to beat Yeryomenko. However, SKA had to regroup once again after a bitterly contested goal in the closing stages of the middle period. Dynamo was on the power play when a powerful shot from Alexander Osipov was deflected into the net by Daniil Tarasov. SKA’s furious defense had several questions for the officials and it took two rounds of video analysis before the goal was awarded. First the officials  confirmed that Tarasov had not used his hand to push the puck into the net. Then, on the request of the SKA bench, the men in stripes went back to check whether Tarasov had encroached on Koskinen’s crease during his tussle with Slava Voynov right on the edge of the paint. The goal stood, SKA protested in vain – but the defending champion went on to find the answers on the ice.