Metallurg Magnitogorsk recovered from an early goal to edge Avtomobilist and take a 3-2 lead in the series.

The visitor stunned Magnitka with a fifth-minute marker credited to Yegor Zhuravlyov. The Avtomobilist forward fired in a shot and saw a deflection off Vladislav Kaletnik take it past Ilya Samsonov and into the net.

That was just reward for an enterprising start from the outsider, with Avto well aware that victory in this game would give it a great chance of wrapping up the series on home ice on Thursday. But steadily Magnitka came back into contention and the home team’s first power play saw Viktor Antipin level the scores from the blue line.

As Metallurg splutters through this stage of the playoffs, Sergei Mozyakin has been conspicuous by his absence from the scoresheet but the KHL’s all-time leading goalscorer finally got off the mark for this post-season in the 32nd minute. Avto goalie Igor Ustinsky got a thorough work-out from Metallurg’s top line and when Chris Lee’s shot bounced to Mozyakin in the slot there was only one outcome.

Avtomobilist thought it had equalized in the 49th minute as the puck found the net off the skate of Artyom Gareyev. However, the video officials saw it differently and the goal was ruled off due to a kicking motion. 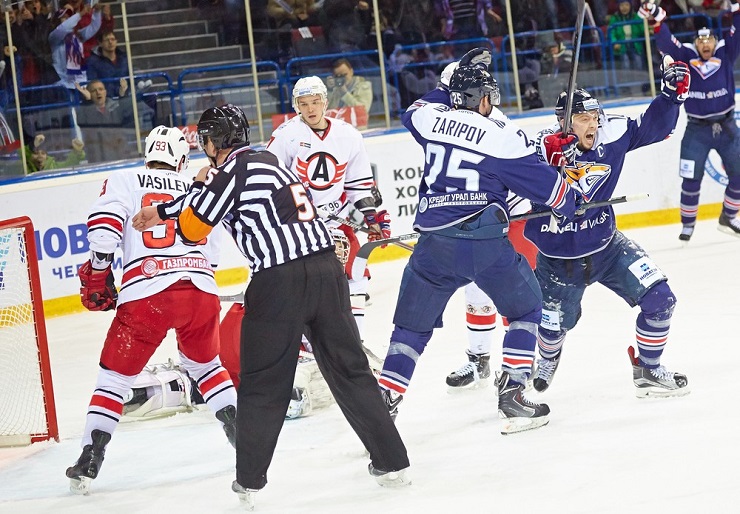 Within seconds the game was all but up as Jan Kovar went up the other end of the ice to make it 3-1, forcing the puck home after a storm around Ustinsky’s net. Avtomobilist complained that the goalie was impeded during the play but after checking the video the officials awarded the goal.

There was still time for the visitor to reduce the deficit. Alexei Vasilevsky continued his scoring streak with a deceptive wrist shot from the blue line that did enough to deceive Samsonov and set up a tense finale, but Denis Platonov’s empty-netter in the last second wrapped up the win.