Sibir one game away from progressing

Sibir’s serene progress through the first round continues with a comfortable win in Vladivostok to move to within one victory of sweeping Admiral.

After two defeats in Siberia, the home team knew that things had to improve fast if it was to maintain any serious hope of continuing its playoff campaign. But it took just 14 minutes for Sibir to take the lead, aided by a defensive blunder that presented Konstantin Okulov with the chance to go one-on-one with Ivan Nalimov and open the scoring. The blow was doubly harsh, since Admiral had created the better chances early in the game only to be punished for some sloppy play at the other end.

A brief recovery followed: Admiral earned a power play and after winning the puck from the face-off the play came to Oscars Bartulis. His pass set up Konstantin Makarov to tie the scores and the game was level at the first intermission.

Two goals for Sibir in the middle session effectively ended the game, though. Sergei Shumakov got the first just after the half hour. Sibir continued to press as a power play came to an end and Shumakov produced a fine finish from the left-hand face off circle. That marker prompted a tussle between Admiral’s David Booth and Maxim Ignatovich of Sibir; both of them took 2+2 minute penalties. 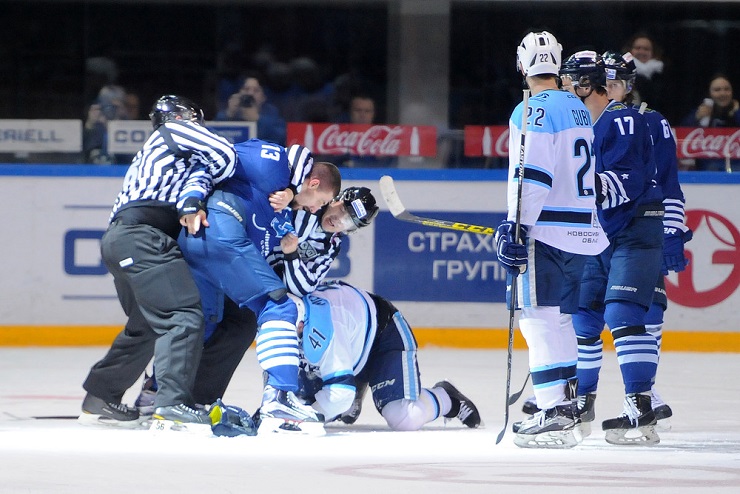 The game was wrapped up in the 39th minute. Maxim Shalunov saw his shot saved and the rebound bounced far from goal to Vladislav Naumov who returned the puck with interest with an instinctive one-timer that gave Nalimov no chance. Sadly for his team, chances of progressing in this season’s competition also seem to be slim and that frustration took its toll in the third period. Dmitry Sayustov was expelled from the game for a high hit before Samvel Mnatsyan managed to drop the gloves with Andrej Meszaros in the last minute and earned himself a total of 29 minutes in penalties for his trouble.