CSKA came from 0-2 down to defeat Slovan thanks to Antti Pihlstrom’s overtime winner. The Army Men now take a big advantage to Slovakia for game three of this series on Thursday.

It took just two-and-a-half minutes of added time to snap a 2-2 tie as Sergei Andronov’s shot slid across Barry Brust’s pads and dropped perfectly for Pihlstrom to sweep into an empty net and shatter Slovan’s hopes of levelling the series.

Slovan, who had never won a KHL play-off game, showed no signs of any hangover from Sunday’s 2-0 defeat and took the lead on the power play in the 14th minute. Vaclav Nederost got the goal, wrestling possession away from Mikhail Naumenkov on the slot after Cam Barker’s shot from the point caused panic in front of Ilya Sorokin.

Sorokin’s evening did not improve: with seconds left in the middle session he was beaten again, this time by Tomas Starosta’s shot from the point. The teams were playing 4-on-4, and although Slovan had just won possession from a face-off to the goalie’s right, there seemed to be little about the play that would make the shot unusually challenging. 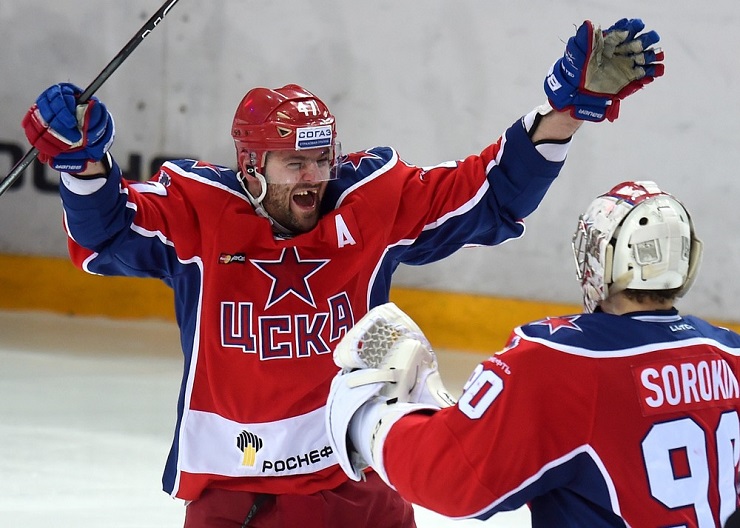 In the third period, however, it was Slovan’s turn to question the goalie. Brust will wonder just how Kirill Petrov’s effort on the wraparound managed to creep between post and skate to halve the arrears in the 45th minute. Stephane da Costa went on to tie the game after Alexander Radulov battled hard from behind the net to pop the puck out on the crease. Ivan Telegin fired into Brust’s pads but da Costa made no mistake with the rebound to take the game into overtime and set up Pihlstrom’s big moment.