Beat That! A Selection of All-Star Game Records

Catch us if you can! The League is proud to present a short history of unsurpassed and unprecedented achievements by the KHL’s finest players in that great annual festival of hockey - the All-Star Game.

We will begin with two of the most recent, both set in the Master Show skills competition which preceded the 2015 All-Star Game in Sochi. All who were there at the city’s beautiful Olympic venue, the Bolshoy Ice Dome, watched in wonder at the extraordinary marksmanship of Matthew Gilroy in the Shooting Accuracy contest, who not only hit four targets in four shots, but did so in just 4.78 seconds.

The other record set in Sochi, while certainly impressive, is far from unbeatable. It belongs to Wojtek Wolski, the fastest skater in the history of the Master Show, who completed a lap of the rink in just 13.178 seconds.

The Fastest Skater competition will be the opening event in the 2016 Master Show, but Wolski will not be there to defend his title. The Canadian-Polish forward was not among those selected to play in the All-Star Game, so maybe someone else is ready surpass his achievement and earn the title of Fastest Man in the League. We will soon find out.

In contrast, the record for the Hardest Shot has remained intact for four years, and may well last for many more. This almighty strike by Alexander Ryazantsev in Riga, 2012, was measured at 183.67 km/h (114.13mph), and no subsequent attempt has even come close.

The Hardest Shot will be the second item on the Master Show menu, to be followed by three events (Shootout, Awesome Attack – Solid Defense, and Fastest Skater Team Relay) in which, officially, there are no records to be broken. We can still count the number of views on YouTube, however, and in this department, the undisputed record-holder is Nikita Gusev’s sublime “dragon’s tail” shootout goal in Sochi, 2015.

Five million hits on YouTube is a formidable target, but it is possible that the VTB Ice Palace will witness something so spectacular that even this record crumbles. Maybe Nikita himself has something ingenious up his sleeve.

If we move on from the Master Show to the next chapter in the record books – the All-Star Game - we see that it is dominated by two greats of the modern game: Sergei Mozyakin and Alexander Radulov. 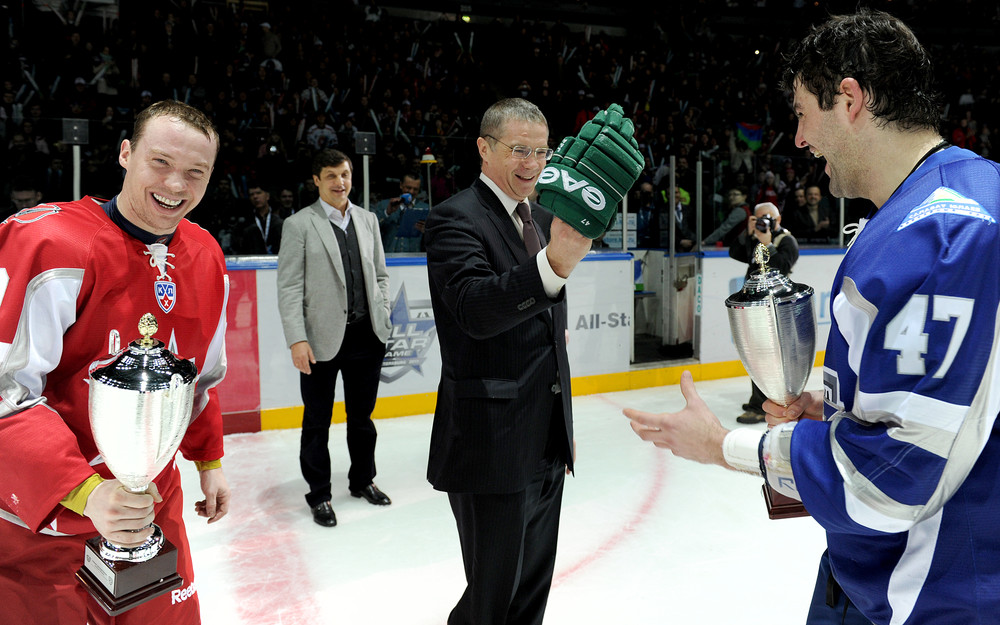 Sergei is the only man to have appeared in all seven previous All-Star Games, and he leads the field in points (23) and goals (16). However, his total of assists (7) is dwarfed by Alexander’s haul of (13). No player can match Radulov’s 6 assists in one game or Mozyakin’s 6 goals in one game. The record for the most points in one game (7) is shared by – you’ve guessed it - Sergei Mozyakin and Alexander Radulov. Both players achieved this in 2011 and Mozyakin repeated the feat in 2015, but we should note that Radulov missed last season’s event through injury, after being chosen to play by the fans.

Now Radulov is back, although he, like Mozyakin, has only recently recovered from illness, but maybe one or both can delight us with new peaks of excellence. Or maybe someone else is planning to break the duopoly.