Goals, shutouts, and brand new arenas... the highlights of 2015

Last year in the KHL left so many remarkable, curious, inspiring, surprising and record-breaking events imprinted on our collective minds that to count them would be nigh on impossible. That is why we limited our search to finding just ten of the brightest moments of 2015, and we present the results below for your enjoyment. 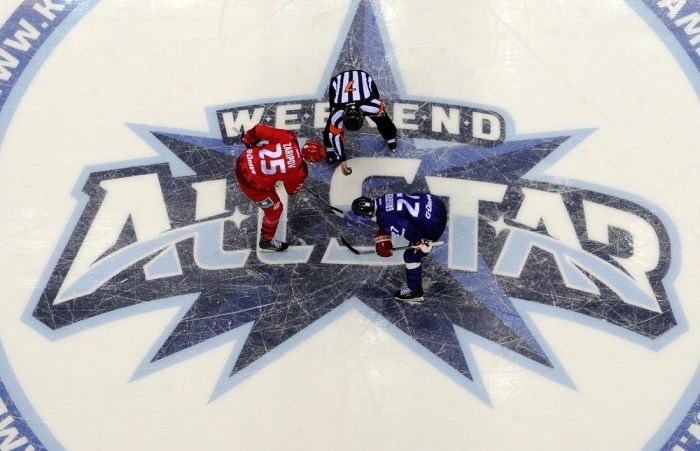 All-Star Game in Sochi
The year got off to the perfect start with the All-Star Game, when the League’s finest players were brought together to produce an unforgettable festival for hockey fans. On the 25th of January, the stars assembled at Sochi’s Bolshoy Ice Dome, the most modern arena in the vast territory of the KHL and one alive with memories of the epic Olympic battles of the previous year. Before the game, the 12,000 in the stands and the multitudes watching on TV saw several records tumble in the Master Show Super Skills. There was the speed of Wojtek Wolski as he skated the fastest-ever lap; the marksmanship of Matthew Gilroy, who struck four targets in four shots; and the artistry of Nikita Gusev, whose stunning “Dragon’s Tail” shootout goal swiftly yielded more than five million views on YouTube. The All-Star Game itself equaled the existing record for high scoring, ending as an 18-16 triumph for Team East. 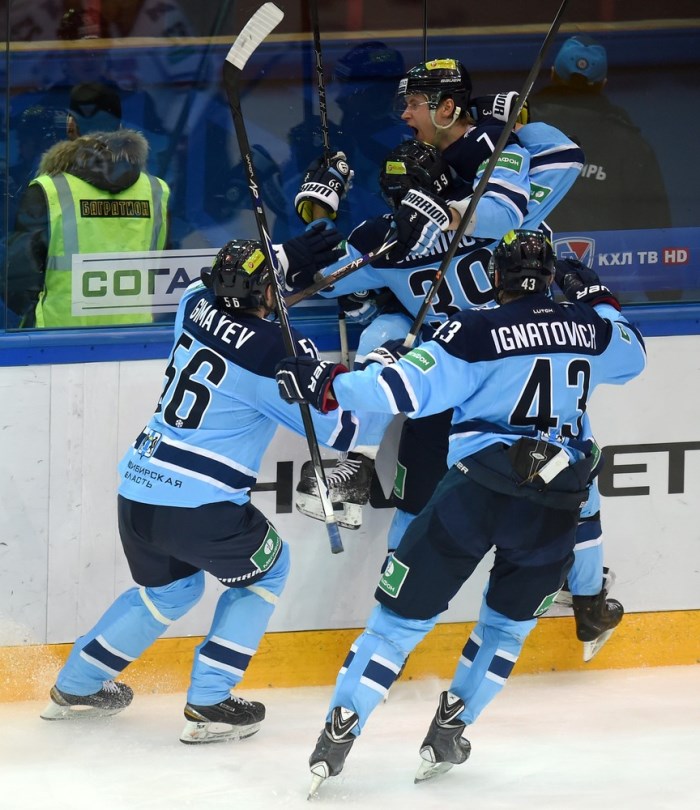 Sibir’s play-off exploits
By late February, the Championship had already entered the decisive stage as the 16 best teams faced off in the fight for the Gagarin Cup. Amid the traditional frenzy of predictions by pundits, informed or otherwise, regarding each team’s potential progress, few believed that Sibir could reproduce its regular season form and make an impact. Andrei Skabelka’s men proved to be the dark horses, eliminating 2013 finalist Traktor and reigning champion Magnitka to reach the Eastern Conference final for the first time in its history. There was to be no fairy tale ending, but the Novosibirsk men made mighty Ak Bars fight every step of the way. Now, four months into the current season, a reinforced and confident Sibir is riding high in the Eastern Conference standings, proving that last year was by no means a flash in the pan. 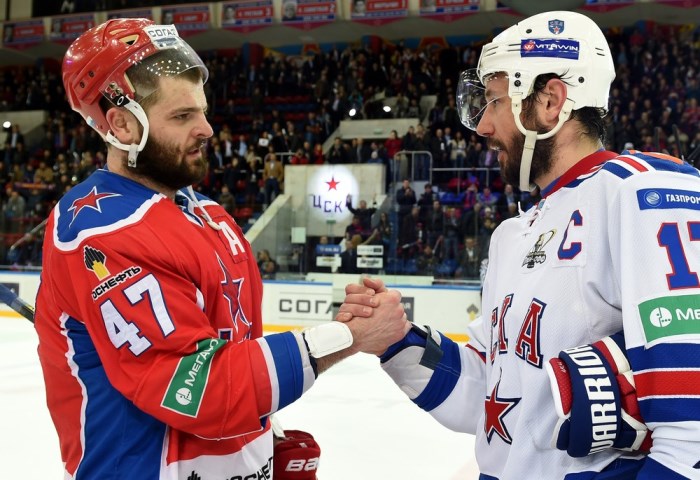 SKA 4-3 CSKA
While the hockey in the knockout stage was of the highest quality, the results seemed too predictable, as series after series was won by the team with the higher seeding. But then, in the most dramatic fashion, the veneer of predictability was smashed by the Western Conference final between the Moscow and Petersburg army teams. With their backs to the wall after three straight defeats, SKA appeared to be fighting for little more than a face-saving end to the campaign, but incredibly they clawed their way back to break the hearts of the regular season champions and become the first team in the nation’s history to overturn a three-game deficit to win a series. As a result, Vyacheslav Bykov’s men were hailed as favorites for the final - a status they confirmed with a confident win over Ak Bars. 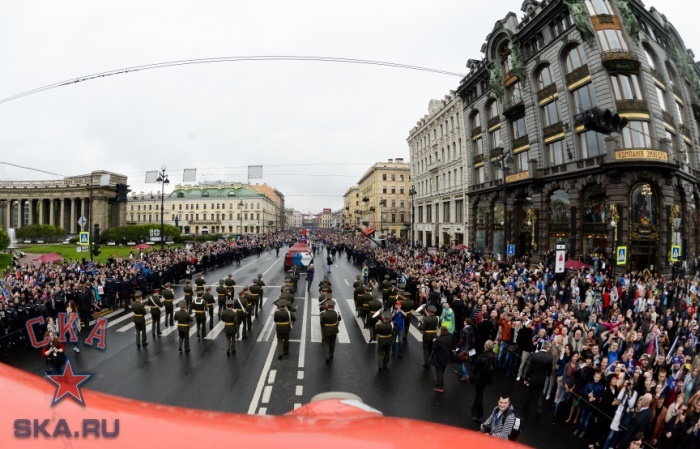 Petersburg victory parade
No one entertained the slightest doubt that SKA’s first ever triumph in the Gagarin Cup would lead to a splendid celebration. Thus, on the 23rd of May, not even the traditional springtime drizzle could prevent thousands of happy souls pouring into the city center to see two open-top buses bearing the victorious players, club management and, of course, the sacred silverware slowly inching along the northern capital’s historic avenue, Nevsky Prospect, all the way to the Hermitage. Then, while the hero players were lauded by the great and the good, the people of Petersburg abandoned their offices and shops to create a sparkling carnival atmosphere. For a few hours on a wet May evening, the city was probably the happiest in the world. 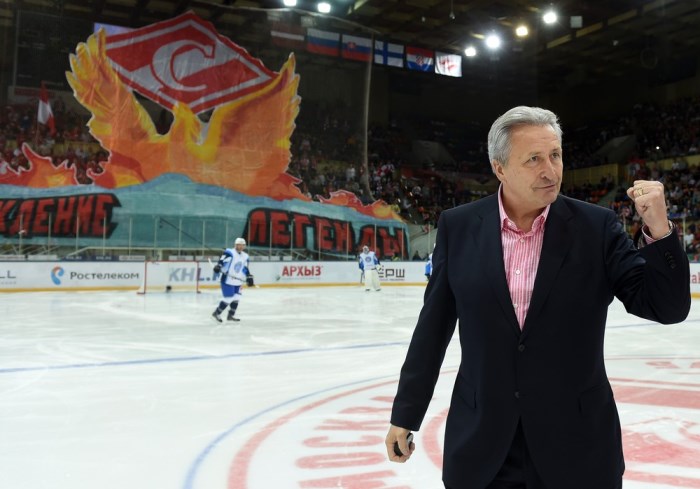 Spartak is back
The famous Moscow club was absent from the previous campaign due to financial problems, but as 2015 got underway, whispers of a resurrection grew ever more loud and frequent. Finally, on the 22nd of May - the penultimate day of Spartak’s unhappiest season, the return of the Red-and-Whites was confirmed by the Chairman of the League’s Board of Directors, Gennady Timchenko. With the help of the KHL, the club had found a reliable sponsor and spent the summer months assembling a new roster with the able German Titov at the helm. The new Spartak chose a new home, at the city’s famous Luzhniki complex, and marked its return to the big time with a thrilling 4-3 overtime win over Dinamo Minsk. 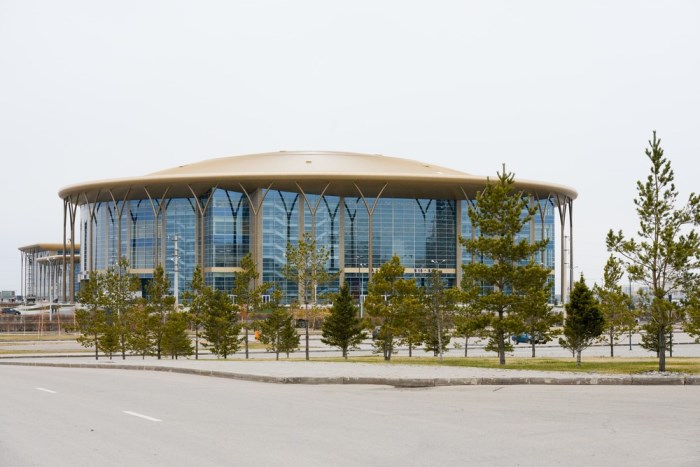 New arenas
For over a year, Sochi’s Bolshoy Ice Dome enjoyed its status as the most modern stadium on KHL territory, but in the summer months the finishing touches were applied to two beautiful new arenas, the VTB Ice Palace in Moscow and a yet-to-be-named palace of sport in Astana. As the venues boasted higher capacities than their predecessors, both Dynamo Moscow and Barys Astana marked their housewarming parties by hosting a record home attendance in their new surroundings (respectively, 11,209 and 8,100), and curiously enough, both on the night of the 5th of December. While some over-zealous statisticians rush to remind us that five years ago the Muscovite Blue-and-Whites attracted a crowd of 12,500 for the visit of Ak Bars, that game took place at the Megasport Arena, which cannot in all honesty be regarded as Dynamo’s home. 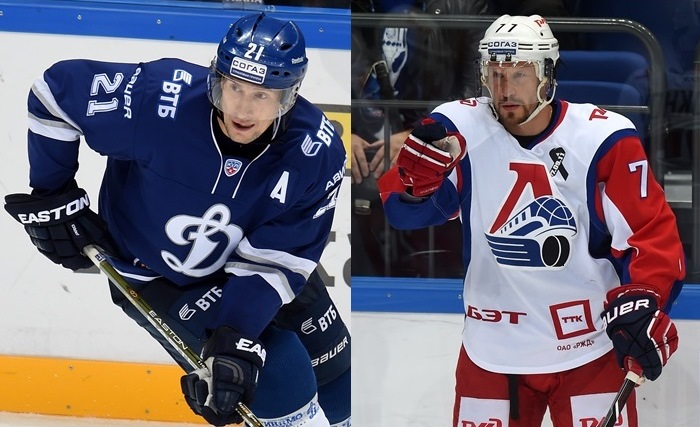 Gorovikov and Gorokhov reach 1,000 games
The new Championship was still in its second week when it produced its first hero. On the 4th of September, Konstantin Gorovikov donned his Dynamo Moscow jersey for the game versus Vityaz, and in doing so, the forward enjoyed his 1,000th appearance in top-level Russian hockey. Only five players had ever reached this milestone, but by the 23rd of October, membership of the elite 1,000 Club went from six to seven as Lokomotiv defenseman Ilya Gorokhov reached his millennial game. Fate had lent the occasion an extra poignancy when she chose the opposition: Dynamo Moscow, where Ilya spent a great part of his epic career. 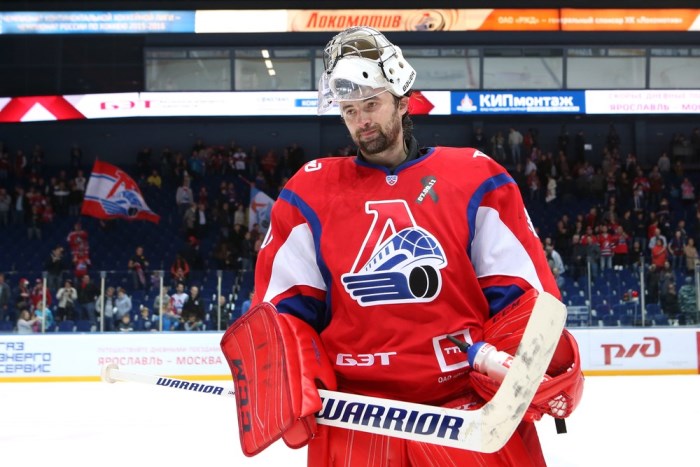 Murygin’s record shutout series
A second Yaroslavl player captured the imagination in October. Goaltender Alexei Murygin kept his goal intact for a record-breaking spell that began deep in the previous month, on the 10th of September, and stretched all the way to the 5th of October, spanning 302 minutes and 11 seconds of playing time. Murygin’s heroics finally came to an end in heartbreaking fashion, as he was less than four minutes away from reaching the all-time record for Russian hockey set by Lada’s Czech goalie, Jiri Trvaj. "It’s a fairy tale statistic,” Alexei said, visibly stunned by his own achievement, The story could have been even more fantastic: Trvaj’s record was rescued by a goal from his fellow Czech, Vityaz forward Roman Horak and Murygin reacted to this setback by posting another long unbeaten spell, one of 178 minutes 12 seconds. What if Horak had missed? Fantasies aside, Alexei has already set another KHL record, having achieved 12 shutouts this season, and with a lot of action remaining. 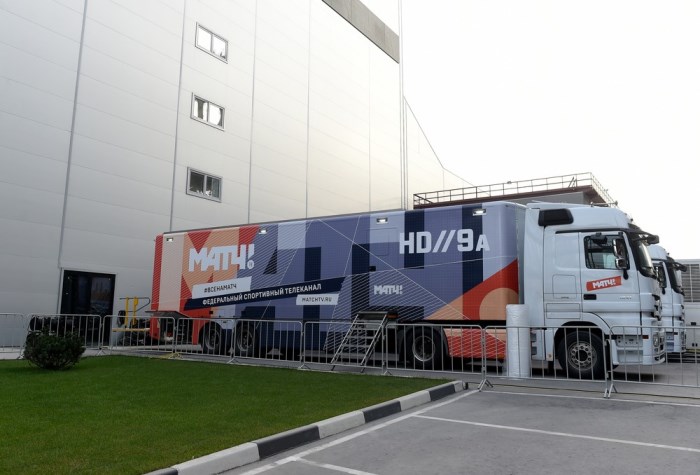 First hockey broadcast on Match TV
On the 1st of November, Russia welcomed a new national channel devoted to sport, Match TV, and the highlight of its opening day on air was, of course, hockey. And this was no ordinary match-up, but the historic Moscow Derby between Dynamo and Spartak, played at the Blue-and-Whites’ new home, the VTB Ice Palace. The teams produced a pulsating thriller, with Dynamo racing to a 3-1 lead; the Red-and-Whites storming back to lead 4-3, and Dynamo recovering to level with under a minute remaining and then sealing a 5-4 win in the shootout. The classic battle forced the channel to delay broadcast of the Spartak vs. Ural soccer match, so that viewers could see the gripping finale in the hockey. 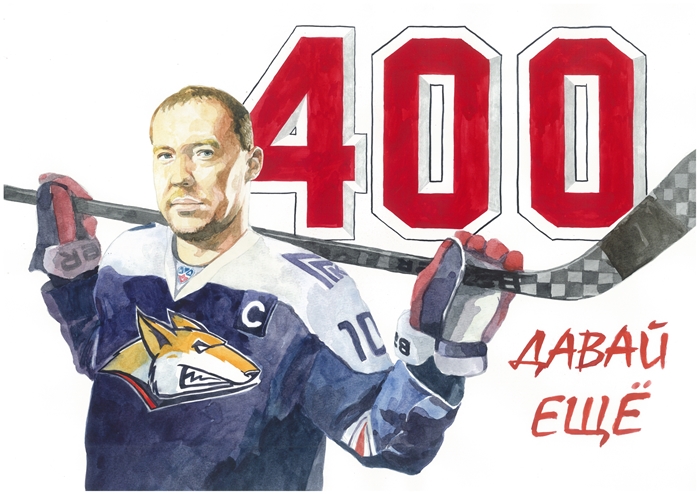 Mozyakin at 409 goals
Sergei Mozyakin has been breaking records and destroying defenses for several years, but in 2015 his achievements began to reach the most dizzying heights. In October, he launched a relentless advance toward the milestone of 400 goals at top-level Russian hockey, and reached it on the 30th of the month with a clinical strike against Torpedo in Nizhny Novgorod. Without further delay, he targeted the magic number of 408, the career total of the great Spartak forward, Vyacheslav Starshinov. Sergei matched and surpassed this on the night of the 11th of December, striking a double against reigning champion SKA in Saint Petersburg and thus becoming the second-highest scorer in Soviet and Russian history. Now Mozyakin the marksman has set his sights on CSKA legend Boris Mikhailov’s record of 428 goals. The hunt continues!