Sochi and Omsk have been chosen as the twin host cities for the 10th Gazprom Neft Cup - Europe’s biggest international hockey tournament for the under-11s, contested by teams of youngsters from the academies of clubs in the KHL. The event will be held from the 19th to the 24th of April and will feature 26 teams from Russia, Belarus, Kazakhstan, Latvia and Finland.

The 2016 Gazprom Neft Cup will follow the successful formula of previous years, with the teams divided into two groups – East and West – culminating in a Superfinal to determine the outright winner. Games in Group West will take place at Sochi’s Olympic venues, the Bolshoy Ice Dome and the Iceberg Arena, while the teams in Group East will do battle at the event’s ancestral home, the Arena Omsk. The climax of the tournament will be the Superfinal on the 24th of April between the winning teams of East and West, while on the 19th, the opening games in each host city will be preceded by a spectacular multimedia show.

In addition to the action in the stadia, the 2016 event will also feature the traditional training program for coaches of junior hockey, but on a much larger scale than ever before, with master-classes conducted by a number of leading Russian specialists in the fields of methodology and psychology of coaching young stars of the future.

Alexander Dybal, Chairman of the Organizing Committee, spoke of his enthusiasm for the forthcoming contest: “The staging of this event, the tenth Gazprom Neft Cup, at the Olympic arenas in Sochi eloquently illustrates our commitment to the tournament’s growth, both geographically and in the modernity of the host arenas. We know very well that the tournament will remain a major highlight in a hockey career, particularly for those enjoying their first experience of playing on the Olympic ice. The spectator interest in last year's Gazprom Neft Cup gives us confidence that this year the fans will pack the stands, and we will strive to make this anniversary event extra special with the shows we provide for the opening games and Superfinal.”

KHL President Dmitry Chernyshenko was also brimming with anticipation: “It is a great pleasure to see that the Gazprom Neft Cup has become firmly established as one of the most important events in the Russian hockey calendar.  Everything is provided to help these young players develop their game, display their skills, show their character and achieve their first great victories in life. We should not overlook the fact that the 2016 tournament will feature three KHL clubs’ making their debuts: Amur Khabarovsk, Lada Togliatti and Spartak Moscow. This ably demonstrates that the ongoing cooperation between the KHL and the Gazprom Neft Cup benefits both parties. It is in our interest to ensure that, in the future, most or even all of these children go on to enjoy a professional career with clubs in the KHL.” 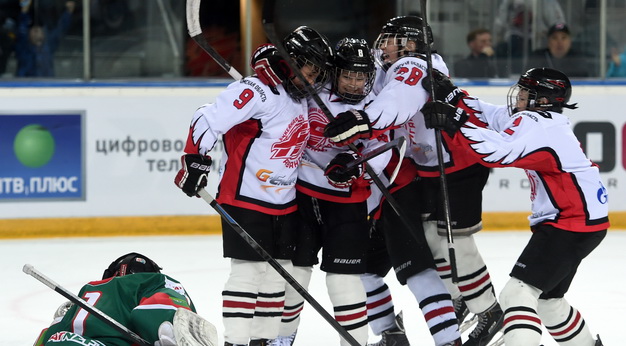 The first Gazprom Neft Cup for teams of young hockey players up to the age of 11 took place in 2007, since when the tournament has grown rapidly and become the biggest children's hockey tournament of its kind in all Europe. The Gazprom Neft company provides all the core funding for the event.

The Gazprom Neft Cup is conducted to standards unprecedented in junior and children’s competitions: the games are held at arenas built and certified for KHL and only the most highly qualified professional referees are on duty at the event, which is covered by the nation’s most respected sporting media. The main trophy was created by the same skilled artisans who crafted the Gagarin Cup, and the trophy resides with the winners until the following year’s tournament. The current holder is Dynamo Moscow

The official partners of the event include major Russian broadcast, printed and electronic media, such as Match-TV, NTV-Plus, KHL-TV, Championat.com, Sport-Express and European Mediagroup.