KHL President Dmitry Chernyshenko lead a delegation of the League’s top management on an official visit to Yekaterinburg on Friday.

The tour began with a lecture given by Mr. Chernyshenko to students at the Boris Yeltsin Ural Federal University, about his experience at managing major sports projects while serving on the Sochi Olympic Games organizing committee and the board of the Kontinental Hockey League. 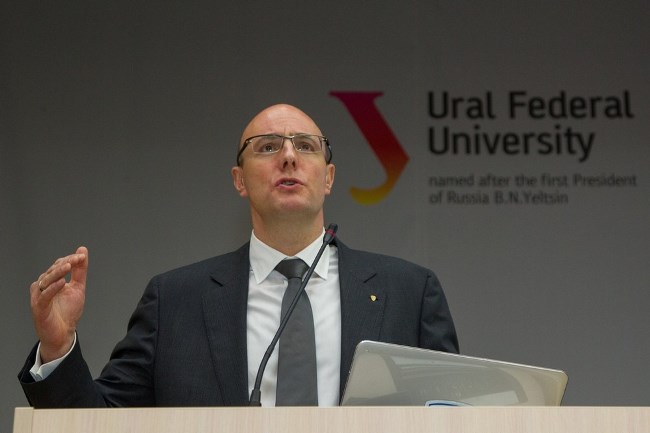 The delegation also traveled to the Uralets Arena, where they laid flowers at the monument to the Lokomotiv players who perished in the 2011 Yaroslavl tragedy, and visited the HC Avtomobilist hockey school before attending a meeting with local government leaders to discuss the development of hockey in the Sverdlovsk Region.

The main outcome of the talks was the signing of an agreement between the KHL the Sverdlovsk regional government, HC Avtomobilist and the Uralets entertainment complex on furthering the development of hockey, providing support for children in sport, and improving sporting infrastructure in the region.

The day ended with a visit to the arena to watch the game between Avtomobilist and Dynamo Moscow. 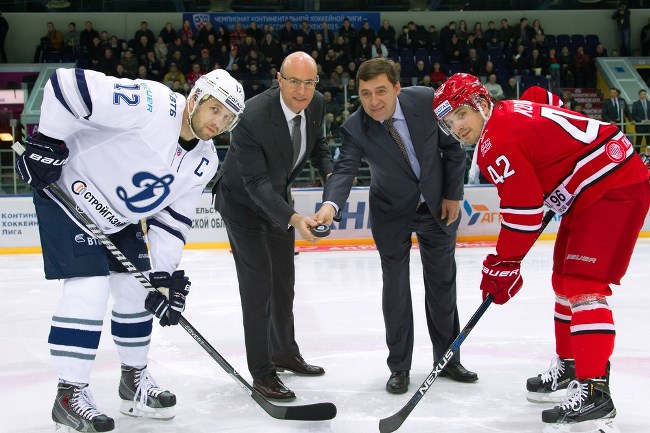 Dmitry Chernyshenko thanked Sverdlovsk Region Governor Evgeny Kuyvashev and HC Avtomobilist President Alexei Bobrov for their hospitality, and paid tribute to the city for its proud hockey past and its plans for the future:

“The local hockey school has produced such great and diverse stars as Viktor Puchkov and Sergei Shepelev, Ilya Byakin and Nikolai Khabibulin, Alexei Yashin, and Pavel Datsyuk. The rich hockey tradition of the Sverdlovsk Region continues to this day, as can be seen from the performances and results achieved by the young players of the Avtomobilist team.

The multilateral agreement we signed should further the development, improve the infrastructure and increase the popularity of hockey in the region. We welcome the decision by the regional authorities to approve the construction of a new arena in Yekaterinburg with a capacity of around 12,000. This project is a fine illustration of the road map for progress agreed by the club, local government and investors.”