There were some famous and illustrious faces among the 7,400 spectators who watched Sibir defeat Avangard in Novosibirsk on Monday, including KHL President Dmitry Chernyshenko. The League’s chief headed a delegation of VIPs, including IIHF President René Fasel, on a working visit to the city to examine the local hockey infrastructure and liaise with senior figures in regional government and Novosibirsk hockey.

Mr. Chernyshenko began the visit by meeting Vladimir Gorodetsky, the Governor of Novosibirsk Region, and Dmitry Bosov, head of HC Sibir Supervisory Board. The delegates then joined Mr. Fasel and Sibir General Manager Kirill Fastovsky to attend the opening of a new training rink built for the local hockey school and the Novosibirsk MHL team, the Siberian Snipers. 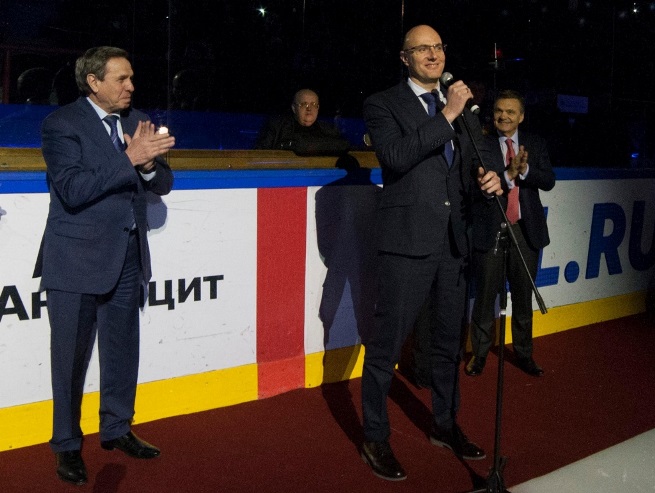 Mr. Chernyshenko gave his summary of the trip: “Hockey is one of the most fully developed and popular sports throughout the Novosibirsk region, with more than 9,500 players and over 200 hockey rinks, including 12 indoor arenas with artificial ice. The game’s flagship in the region is HC Sibir - one of the most popular teams in the KHL, and the team’s home arena, the Sibir Ice Palace, is the only stadium in the League that is regularly filled to capacity.

However, this fact illustrates the need to build a new, bigger and more modern arena in Novosibirsk, one which is fully able to meet the demands of the city, the club, the fans and the KHL Regulations. Steps are already being taken to attract investors to back the construction of a new stadium that can seat up to 14,500 spectators, and the regional authorities are eager to participate in the provision of modern engineering and transport infrastructure for the project.”