Let us begin by talking a little about your pedigree. It is a well-known fact that you are the son of a professional baseball player, but he ended his career not long after you were born, so you never got to see your dad in action.
I was about four years old when he stopped playing so a lot of the memories aren’t really there. We had a lot of pictures and things, and some of my favorites are from after I was born and he was playing for the Kansas City Royals, and there was a father-son game in Kansas City. We have pictures of that and those are special to me, but yes, he ended his career when I was pretty young, so I don’t have too many memories of it.

So your dad’s sport didn’t tempt you.
I played baseball when I was younger, but then I had a lot of energy and so the excitement of hockey kind of pushed me towards it. Baseball is a little slower, so that’s why I went into hockey.

So now, you are a KHL player. Was this your first chance of coming here, or were there earlier offers?
I had some chances to come over here at the start of my professional career, but as you know, I’m from America, so growing up I thought that’s where I wanted to play. I was given a shot there, but last summer I was looking for a new opportunity. This is a great league and I wanted to try it. And it’s good to experience a new culture, and a really good league, so this is a very good opportunity for me.

Of course, plenty of American players came here over the years, so did you have any chance to talk to any of them, or to anyone who had KHL experience?
Yes, I have a good friend, Ryan Stoa, who I played with for a couple of years and now plays in Novokuznetsk, so I spoke with him a little. And I knew Chay Genoway, so I would talk with him. I even talked to some Russians I played with, like Stanislav Galiev, now with the Washington Capitals. I talked to him quite a bit about the KHL, so I gathered information on the League and they all had great things to say about it. That’s what made me want to come over here. 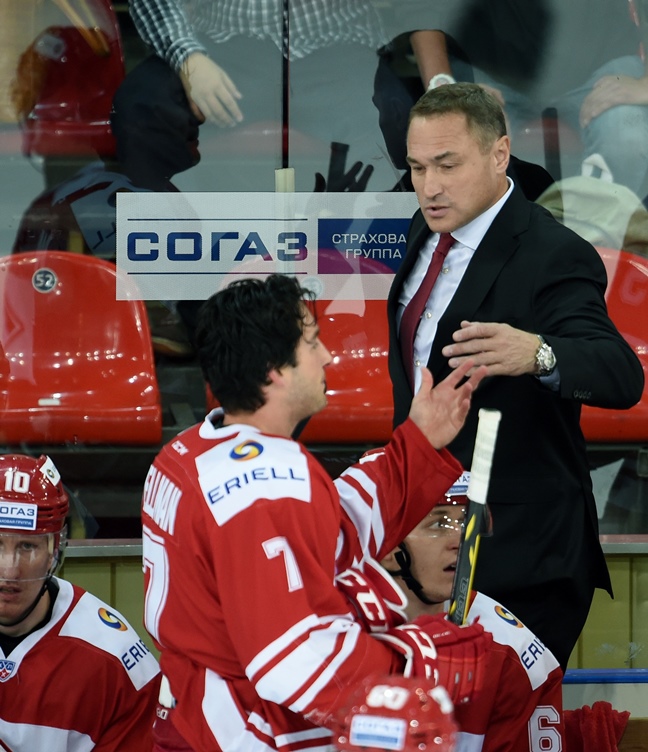 So you were about to come to a reborn club; a club formed from nothing, so to say. Did you have any misgivings about that?
Well, I spoke with my agent. He is the one that handled everything and presented Spartak to me, and he gave me the back story about its being a new team coming back to the League. I didn’t really have any concerns. He explained everything and that was OK with me. I wanted a new experience, so everything was good.

So now, how about your first impressions? Has the experience matched your expectations, or even exceeded them?
From what I had heard, it is a really good league and that is absolutely what I’ve noticed. There are really good players and really good teams. Obviously, the style is a little different and it takes some getting used to, but I’ve been very impressed with the play. Yes, I have enjoyed my time so far in the KHL.

Players always say that they get no chance to see anything apart from the hotels, airports and arenas. Still, you have been here a few months now, so do you have any impressions outside the arena, so to say?
Yes, I’ve been able to tour around Moscow a little bit and I’ve been very impressed. The area is really nice and I get to go down and see Red Square and some of the cathedrals. There is a lot of history, and it was exciting for me to see these great shops and restaurants. As you said, in some other places it is difficult to see anything. When you are on the road, you just go to the rink and the hotel, but we walked around Astana and that’s a place I’d never been before and very different.

Are there any things you miss from your life in America?
I miss my family, my parents. We FaceTime quite a bit, just to say, “Hi!” and things like that, and I miss my friends out there. Obviously, I grew close to a lot of people in the United States, so to be away from them is tough, but just being able to do things like FaceTime, to be able to talk to people and see them, helps a lot? 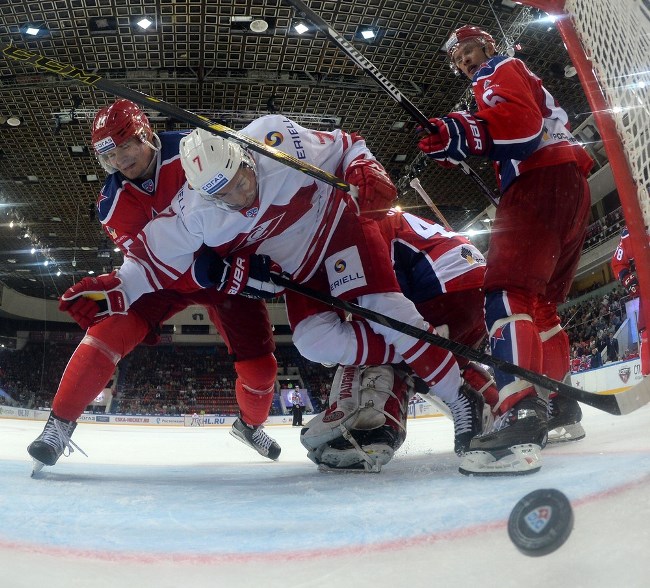 In terms of your game, you are not a big, physical player, which would seem to be a disadvantage in North America. Is it easier for you here? Does the style suit you more?
I think so. Yes, I’ve never been known as a big, physical player, but I think transitioning into this league and getting used to it will definitely be better for my style of play. I was getting used to everything but then I got hurt, and I’ve been out for a while. That was a little frustrating, but now I’m getting back into the swing of things, I think it will be good for my style.

You were called up on international duty recently, which is great. Did you enjoy it?
I had a great time in Germany. It was my first time getting to play for the national team and it was awesome. It was a good group of guys, and to get a goal on the comeback win we had against the Swiss was really exciting.

There were plenty of players from the KHL, of course. Cade Fairchild, and you mentioned Ryan Stoa. Were there any other players you knew beforehand?
Yes, a few. I had played against Bobby Butler in college; there was Matt Gilroy, and it was good to see them.

Was it just fun, or did it help you as a player?
It was especially good for me, as I was coming back from an injury. To be able to get out and play games again helped me a lot. Yes, it was fun, but also very helpful.

What about the future? We all know Spartak is not doing very well, but the team is getting experience every day.
Yes, we had some losses that were disappointing, so I think in the near future we’d like to put together some real solid games, sixty-minute games, and get wins. I think our team is maturing and we’re getting better as the season goes. For me, personally, I’d like to keep getting used to the style and really start playing the puck in the net and scoring some goals for the team. In the long run, our aim is building our way up to a play-off spot. Making the play-offs would be huge for us. So we are trying to get a good run, and I think those are the things to look forward to in the future.