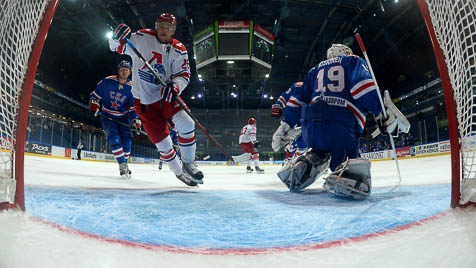 Bearing in mind Prussian Field Marshall Helmuth von Moltke’s observation that no plan, however elaborate, survives contact with the enemy, a number of KHL clubs continued their preparations for the new season with friendly games against fellow clubs in the League. A total of five games took place on Friday at various locations around Europe.

Dinamo Riga took on Lada in the little Latvian town of Valmiera, and there was a strong North American flavor to the contest. A two-goal burst in the 17th minute, from Canada’s Steven Seigo and the USA’s Tim Sestito, suggested as easy evening for the Latvians, but a second-period strike from Stanislav Bocharov halved the deficit. The result remained in doubt until 20 seconds from the end, when Sergei Svetlov replaced Ivan Kasutin with a sixth skater and Tomas Kundratek gratefully guided the puck into the unguarded net.

The townsfolk of Maribor, Slovenia, were treated to two highly entertaining clashes in two days between Slovan Bratislava and Salavat Yulaev, and on both occasions the Slovaks celebrated victory by a slender 3-2 margin. Friday's affair was settled by a double from Andrej Stastny and a strike from Ziga Jeglic, with Anton Lazarev and Denis Bodrov scoring for the Ufa men. Jeglic was also on the scoreboard in Wednesday's encounter, with Ladislav Nagy and Pavol Skalicky inflicting the rest of the damage for Milos Riha's men in a frantic second period, after Teemu Hartikainen had opened the scoring for Anatoly Yemelin's team. A third period reply from Enver Lisin kept the result in doubt until the final siren sounded.

Three days after thrashing Spartak 6-1 in Vierumaki, Lokomotiv Yaroslavl continued its tour of Finland with a fiercely contested game in Espoo against Gagarin Cup winners SKA Saint Petersburg. The outcome suggests that both coaches, Loko’s Alexei Kudashov, and new SKA boss Andrei Nazarov, have been paying particular attention to powerplays, as only one of the seven goals on the night was scored with ten skaters on the ice. It was the Yaroslavl boys who emerged the stronger as they punished Petersburg penalties on four occasions to seal a thrilling 4-3 win, thanks to a double from Jonas Enlund and one each for Geoff Platt and Patrik Hersley. The champions replied with powerplay strikes from Alexander Kadeikin and Jarno Koskiranta, and the game’s solitary even strength goal from Svyatoslav Grebenshchikov.

HC Sochi invited the men the men of Severstal Cherepovets to a game in the famous Russian resort, but the southerners found themselves on the receiving end of a 5-1 hammering by the tourists from the steel city up north. A hat-trick by Igor Skorokhodov and a brace from Sergei Monakhov gave boss Vaclav Sykora plenty to smile about, while a goal from Dmitry Kazionov gave some brief cheer to Vyacheslav Butsayev’s men.