22 July 2015, 13:44 News
Three weeks have passed since the players, coaches and staff of most of the KHL’s clubs returned to work after their summer vacations, which were significantly shorter than usual due to the early start of the forthcoming Championship.

Now that many of the preseason get-togethers in training camps are coming to an end and the players have grown used to their new comrades (and in many cases, new cities), the time has come for the teams to put the coaches’ theories into practice and embark on the traditional round of friendly and exhibition games in the run-up to the new season.

The men from Dinamo Minsk decided to test their mettle against fellow Belarusians, HC Yunost. The name translates into English as “youth,” and on this occasion they proved the sprightlier of the two and posted a 3-2 win over the KHL side. Canadian forward Paul Szczechura and Czech defenseman Lukas Krajicek scored for Dinamo, but eventually it was not enough.

Lada chose Latvia as the venue for its first preseason camp, and in the small town of Ozolnieki the men from Togliatti achieved an impressive victory over the Latvian national team. The teams were tied at 3-3 at the end of regulation, thanks in no small part to a blistering display by the Streltsov twins, with Vasily scoring once and Alexander recording a double, before Alexander Mokshantsev settled the affair in the shootout. 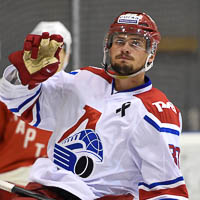 The sleepy little village of Vierumaki, about 100 miles north of the Finnish capital, Helsinki, staged a match-up between Spartak and Lokomotiv. Having missed all of last season due to financial woes, the Red-and-Whites were facing their first game in 504 days, but German Titov’s team showed no signs of rust and a goal in the first period from American forward Casey Wellman gave them a surprise 1-0 lead at the interval.

However, the setback merely stung Alexei Kudashov’s boys into action, and they hit back with six unanswered goals to record a confident victory. Dmitry Maltsev (right) was the pick of the Yaroslavl men, finishing the evening with a hat-trick, and there was a goal apiece for Yegor Averin, Emil Galimov and Sergei Konkov.
#friendly
Share
Прямая ссылка на материал