Return of the Red-and-Whites!

The official website of HC Spartak has confirmed that the famous Moscow club is to return to the Kontinental hockey League Championship.

Two-time Olympic champion Alexander Yakushev (pictured), Chairman of the Spartak Supervisory Board, gave his reaction to the announcement: “I’d like to congratulate all the hockey fans who have waited so long for this day. I want all who love Spartak to show their gratitude to those who have made this possible. They did a great job and worked extremely hard, and for this we owe them our thanks.” 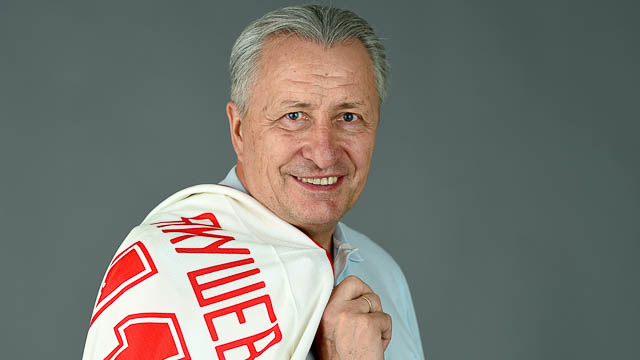 Yakushev’s fellow double Olympic champion, Vyacheslav Starshinov, has been named as the new club president, while yet another, Boris Mayorov, has been appointed as the chairman of the board. Two more Olympic gold medalists have joined the management team: Alexei Zhamnov has become the club’s general manager and Valery Kamensky is the new vice-president.

Spartak Moscow Hockey Club was founded on the 22nd of December, 1946, in time to compete in the inaugural season of the USSR Championship. Since that time, the club has been USSR champion on four occasions, silver medalist 11 times, bronze medalist 9 times and twice won the USSR Cup. In December 2013, with its main sponsor experiencing severe financial difficulties, the club found itself on the verge of bankruptcy. Despite these difficulties, the Red-and-Whites managed to finish the 2013-14 KHL Championship and its youth team captured the Kharlamov Cup.

According to reports, Spartak’s new main sponsor will be ERIELL Group, the international oil and gas exploration services provider.