On Thursday, 21st of May, the KHL staged the Closing Ceremony for the 2014-15 season. During this celebration, the heroes of the seventh Kontinental Hockey League season were presented with awards covering 24 categories.

The Kontinental Cup, for the team which finished first in the overall regular championship standings, was won by CSKA Moscow.

The Golden Stick trophy, which goes to the man voted the most valuable player in the regular championship, was won by CSKA forward Alexander Radulov. 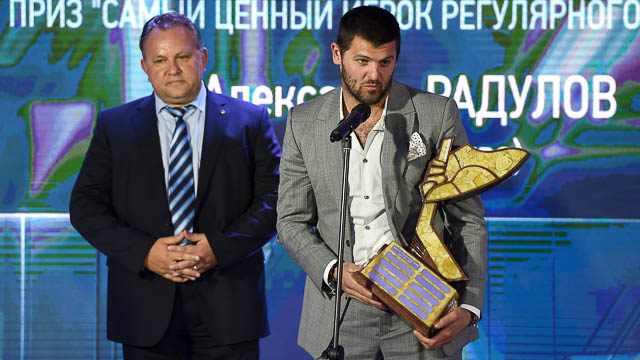 The award for the Highest Scoring Defenseman of the season went to last year’s winner, Kirill Koltsov of Salavat Yulaev, with 48 points (18+30).

The Best Troika award, for the highest-scoring offensive line in the regular championship, was won by Barys Astana’s North American attacking trio of Brandon Bochenski - Dustin Boyd - Nigel Dawes, who together amassed 62 goals.

The award for the Best Plus-Minus for the regular championship is yet another addition to the trophy cabinet of CSKA forward Alexander Radulov, who recorded a  +37.

The award for the Play-offs’ MVP, chosen by the League, was presented to SKA Saint Petersburg forward Ilya Kovalchuk after the fifth and deciding game of the final series.

The trophy for winning the Western Conference went to SKA Saint Petersburg.

The trophy for winning the Eastern Conference went to Ak Bars Kazan.

The Vsevolod Bobrov award, which goes to the highest scoring team in the championship, was won by SKA Saint Petersburg. 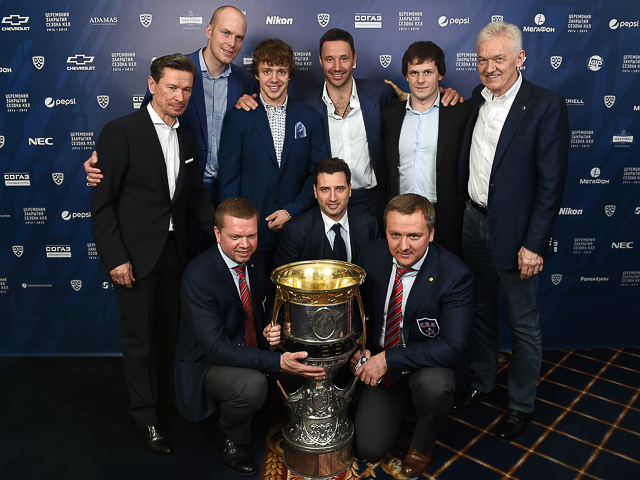 The award for the Best Goaltender of the season went to Mikko Koskinen of SKA Saint Petersburg.

The Alexei Cherepanov award for the best rookie of the season went to CSKA Moscow forward Maxim Mamin.

The Gentleman on Ice award, which is handed to one defenseman and one attacker and rewards players who combine sporting excellence with impeccable behavior, was won by Metallurg Magnitogorsk d-man Viktor Antipin and SKA Saint Petersburg attacker Evgeny Dadonov.

The trophy For Dedication to Hockey goes to the greatest hockey veteran, to recognize his valuable contribution to his team’s success, and this year it was awarded to Atlant Moscow Region forward Vyacheslav Kozlov.

The Sekunda (Split Second) Prize, for scoring the earliest and latest goals in a KHL game, was won by SKA Saint Petersburg forward Jimmie Ericsson, whose goal against Lokomotiv in September was timed at 7 seconds, and CSKA Moscow forward Roman Lyubimov, who in March broke SKA Saint Petersburg’s resistance when he scored with 101 minutes and 39 seconds on the clock.

The Iron Man award, given to the player with the most championship games over the last three seasons, went to Metallurg Magnitogorsk forward Maxim Yakutsenya.

The award for the Best Coach of the season went to SKA Saint Petersburg boss Vyacheslav Bykov.

The Andrei Starovoitov award, the “Golden Whistle”, presented to the best referee of the season, was won by Alexei Anisimov of Moscow.

The Valentin Sych award, given to the hockey club chief who has shown the best leadership of his club during the season, goes this year to Roman Rotenberg of SKA Saint Petersburg.

The Vladimir Piskunov award, for the best administrator at a KHL club, was won by Rustem Kashapov of Ak Bars Kazan.

The Most Improved Player of the season award is given to a young player (aged 24 or under) who produced superb performances over the course of the season and emerged as a leading player in the team. This season the winner was Artemy Panarin of SKA Saint Petersburg. 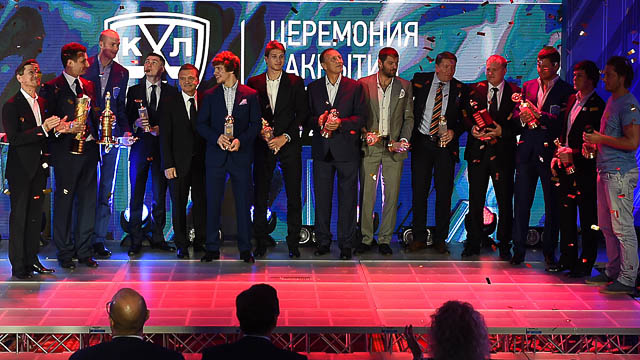