Russia rolls into the final

A wonder goal from Sergei Mozyakin and an opportunist effort from Alexander Ovechkin took down team USA in the World Championship semi-final in Prague – but the team owed a huge debt to goalie Sergei Bobrovsky.

Russia exacted revenge for its group-stage defeat against the Americans in the third period, digging in to secure a 4-0 victory after 40 minutes of tense hockey.

But after Russia made an assured start the Americans came roaring back, dominating much of the second period and making a brighter start to the third as Bobrovsky came to the fore with a string of stunning saves.

Mozyakin, the KHL’s all-time leading scorer, has had his critics at international level in the past, but as the game was drifting towards a stalemate he delivered a flawless riposte to claim his sixth goal of the tournament. Collecting the puck in center ice the Metallurg Magnitogorsk forward stormed into enemy territory, leaving defensemen trailing in his wake before rasping out a wrist shot that zinged off the underside of the bar to end Connor Hellebuyck’s resistance in the American goal. 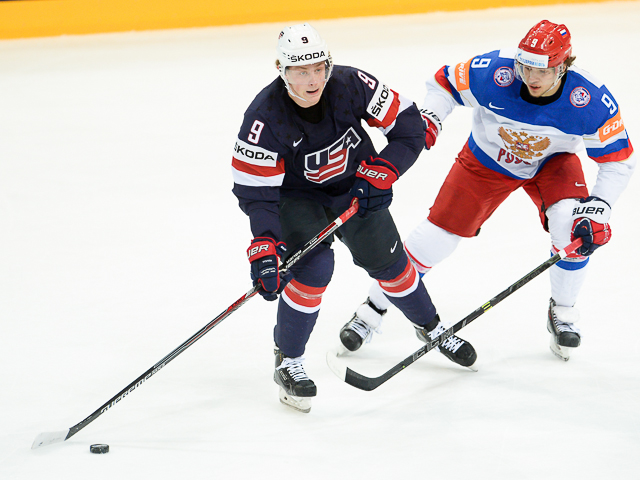 Three minutes later Ovechkin, the focus of so-much attention pre-game, made the outcome secure with a spot of grand larceny. If the Caps’ captain had shown signs of jet-lag in the second period he proved to be razor-sharp as Justin Faulk dithered on the puck in his own zone. Ovi nipped in, stripped the d-man and beat Hellebuyck.

Vadim Shipachyov put a ribbon around the scoreline on 55:26 with a third goal, picking up the puck on the doorstep after Mozyakin and Nikolai Kulyomin stretched the American goalie once again and the Russian party was fully underway among most of the 14,000 fans in Prague’s O2 Arena long before Evgeny Malkin added an empty netter.

Goalie Bobrovsky made 35 saves on his way to a man-of-the-match award to earn the plaudits of his team-mates. Ovechkin described him as “one of the best goalies in the world right now”.

“It’s true, your goalie is more than half your team and it’s clear that right now he’s one of the best around,” the star forward said. “It’s almost impossible to score on him and today he showed his mastery and class when we needed it.” 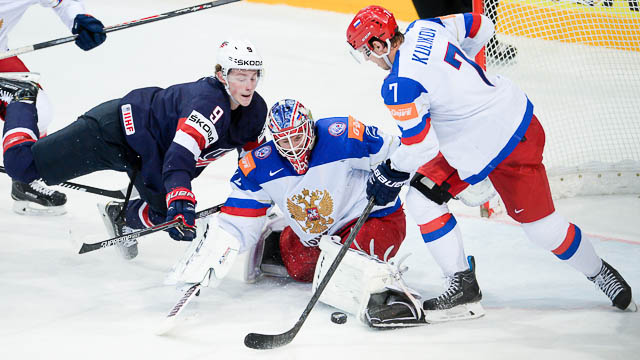 Perhaps the pick of the bunch came early in the third when Steve Moses – a scourge of Russian goalies throughout his KHL campaign with Jokerit – found himself on the doorstep with the defense spread-eagled behind him. Bobrovsky came up big and the chance was gone.

“I can’t really say which was my best save,” he said. “I don’t really put them in a hit parade. It’s just instinctive – you just focus on stopping the puck however you can.”

Those saves steadily diminished the fervor with which the Americans attacked, and when Mozyakin opened the scoring midway through the third the game was up.

Defenseman Dmitry Kulikov said: “Sergei [Bobrovsky] stood on his head for us in the second period but in the end I think our greater experience helped us. They've got some good players but ultimately they're a little bit young and inexperienced. Maybe that helped us in the third.” 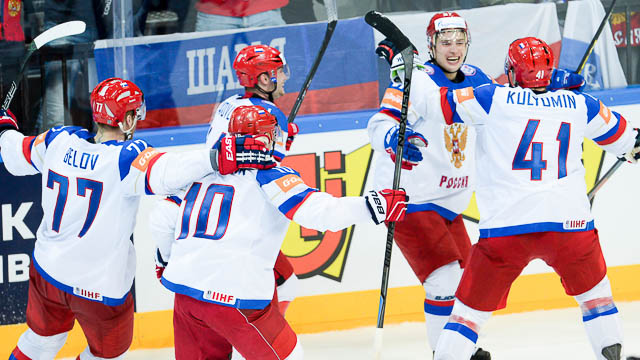 Russia now faces Canada for the gold medal after the powerful Maple Leaf roster posted a 2-0 victory over the Czechs to maintain its 100% record.

This will be the first meeting of these great rivals since 2010 – and it’s a game that is capturing the imagination.

“Nothing we’ve done so far counts for anything,” said Kulikov. “The final is the only game that matters for us.”

Bobrovsky went further: “Tomorrow will be the most important game of our lives,” said the goalie. “The semi-final was our best performance so far and we’re adding to our game every time. Hopefully we can keep that going tomorrow.”