Russia booked its place the semi-finals of the World Championship with 5-3 victory over Sweden in Ostrava.

The win puts Russia in a rematch with the USA, and gives a chance for swift revenge after the Americans won 4-2 in the Group B clash last week. It also means that Sweden hasn’t beaten Russia in a World Championship since 2004.

But while Russia ultimately sets off for Prague in buoyant mood, the way in which the Swedes clawed back a 0-3 deficit before goals from Evgeny Malkin and Vladimir Tarasenko saw the Red Machine over the line serves as a stark reminder that this team is still struggling with something of a soft underbelly.

A game that seemed all but settled in the first minute of the second period when Malkin put Russia 3-0 up turned into a big battle for Russia. Sweden shuffled its goaltending, bringing Ak Bars stopper Anders Nilsson in place of Jhonas Enroth, and steadily chipped away at the deficit with goals from John Klingberg, Anton Lander and Loui Ericsson hauling the men in yellow level with just five minutes to play.

Then came the key moment. Seconds after play restarted Russia advanced. Sergei Mozyakin fed Malkin and he drilled the puck across the face of Nilsson’s goal and got the bounce as it cannoned off the skate of Oliver Ekman-Larsson and went into the net. Tarasenko added an empty-netter to seal the success in the dying seconds. 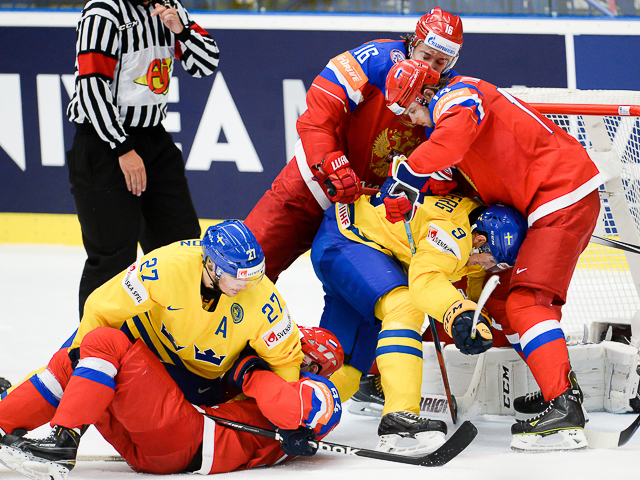 Russia’s captain Ilya Kovalchuk acknowledged that Russia rode its luck, but paid tribute to the players’ commitment in adversity. “When it went to 3-3 we didn’t lose concentration and we stuck to the game plan,” said the SKA forward. We knew we’d get our chance and then Zhenya Malkin had a shot and the puck ended up in the net. Fortune was on our side and we're getting ready to go on.”

Prior to the game the stats suggested a game between two hot offenses and vulnerable blue lines, with the verdict likely destined for the team that was best able to protect a fragile defense.

And with that objective in mind, Russia delivered admirably. Despite only having six fit D-men dressed for action, Oleg Znarok’s team effectively shut Sweden down in center ice, leaving the leader goal-scorer of the tournament, Filip Forsberg, a forlorn figure as the play was largely confined to two thirds of the ice. “We wanted to play more aggressively to help our D-men,” Kovalchuk added.

At the other end, we saw contributions familiar and fresh. Sergei Mozyakin potted his fifth goal of the competition to give Russia an 11th-minute lead and maintain a table-topping power play as he roofed Evgeny Malkin’s cross-ice pass from near the face-off spot.

The second came from Russia’s weakest line thus far in the competition, with Sergei Shirokov forcing the puck over the line from close range after a Viktor Tikhonov shot got caught up in the crease. The play was referred to the video judge as Sweden insisted that the Russian had encroached on Jhonas Enroth’s goal area, but the decision went Russia’s way. 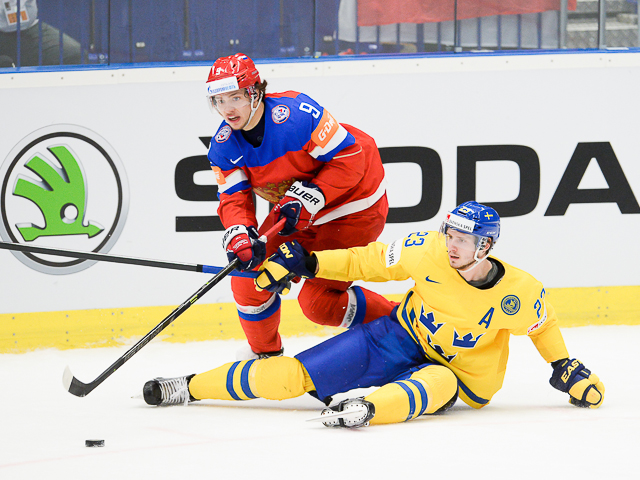 Enroth had endured a difficult tournament, ranking 15th for saves among the regular starting goalies after repelling less than 89% of the shots he faced, and his contribution was soon to come to an end. Russia made it 3-0 48 seconds into the middle frame when Nikolai Kulyomin sent Malkin racing into a huge expanse of open ice to beat the keeper. The Dallas Stars backstop might have justifiably questioned why his defense left him so exposed, but he was invited to carry on the inquest from the sidelines as Ak Bars’ Ander Nilsson was sent out to face the red onslaught.

He performed bravely to keep Russia at bay as the fightback rolled at the other end of the ice, and was visibly disappointed by the nature of Malkin’s game-winner. “It sucks, losing to a goal like that,” he said. “The guy comes in and he’s playing the puck to the far post but it takes a deflection and goes in the net.”

Nilsson paid tribute to the way his team rallied to protect his net with the score at 0-3, but acknowledged that the game was lost early on. “When I came in the team picked it up and started to play better,” he added. “We didn't give them many chances but the way we started was horrible and that’s what cost us today.”