Russia gets ready for Sweden

Team Russia warms up for its World Championship quarter final against Sweden on Thursday after a group stage that has veered from the sublime to the ridiculous.

At times Russia has played fantastic hockey in Ostrava – those first-period blitzes to sink Norway and Slovenia, the rout of Belarus and some of the play in the thriller against Slovakia. Yet at other times the team has looked rather less than the sum of its famous parts. Arguably only two games, against Belarus and Slovakia, saw the Russians put up a performance through all three periods. In other games they were frustrating, combining great play with schoolboy errors and ultimately finishing third in the group behind the USA and Finland.

The last group stage game ended in a shoot-out defeat to the Finns after a 2-2. That result may be a blessing in disguise as victory would have set up a daunting quarter-final against the Czech Republic in front of a partisan crowd in Prague. But the performance still prompted questions. 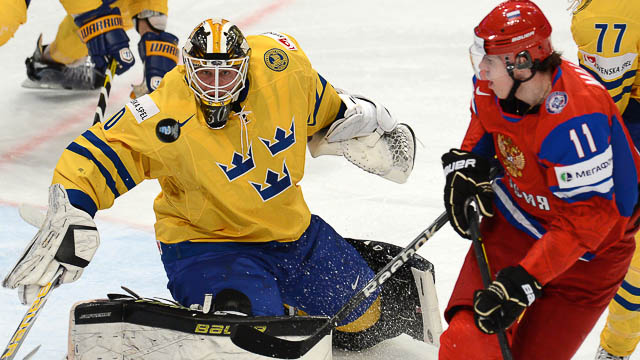 Evgeny Malkin told journalists after the game: “We can only really be happy with how we played in the first period. After we had that five-minute power play and didn’t score it seemed like our intensity fell away. Even so, we were up with five minutes left and then made a stupid mistake.”

Now the focus switches to Sweden and a repeat of last year’s sometimes tempestuous semi-final. That game saw Znarok disciplined for a spat with the Swedish bench, but the Russian coach had no interest in discussing old battles.

“So what? Do you want us to start another fight?” he challenged a journalist who asked him about the incident. “What happened last year doesn’t mean anything to me now.” 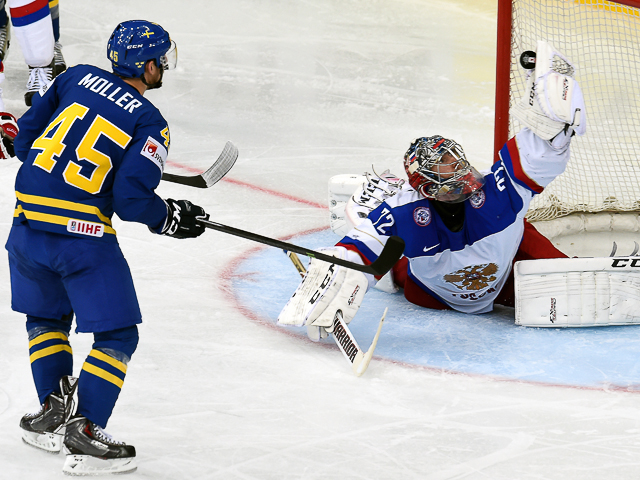 The Russians were generally not eager to look back as they began preparing for Thursday’s game against an opponent that twice won in Mytishchi in the weekend before the World Championship started.

Evgeny Dadonov, who played in those games, said: “What’s done is done. There’s no point at all in looking back at past games. We need to get ready to play the next one.”

Russia’s assistant captain Evgeny Medvedev suffered an injury after a check from Leo Komarov and did not play in the final period of Tuesday’s game against Finland. However, with Znarok promising that the team’s medical staff would ‘work their magic all night’ to get the defenceman back in shape, team doctor Valery Konov confirmed that Medvedev would train on Wednesday. With SKA’s Maxim Chudinov also playing through the pain barrier, Russia is considering calling up Andrei Markov or Alexei Yemelin, both of whom are now available after the Montreal Canadiens bowed out of the NHL play-offs last night. 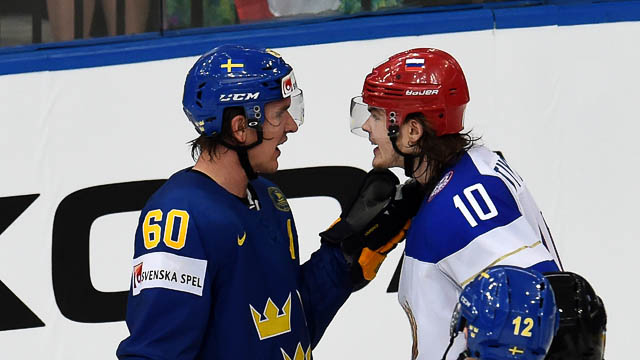 Russia will be joined in the last eight of the World Championship by Belarus. A 3-2 win over Norway secured a place in quarter finals for Dave Lewis and his team, with captain Alexei Kalyuzhny in inspired form after scoring five goals and five assists in the qualifying round.

Belarus now faces a free-scoring Canada team in Prague on Thursday. Group B winner USA takes on Switzerland in Ostrava while Finland travels to play the Czechs in the capital.

Latvia had a nerve-jangling battle to survive in the top flight but holds on despite a shoot-out loss to France after a 2-2 tie. The Latvians, who needed just one point, opened up a 2-0 lead but CSKA Moscow’s Stephane da Costa inspired a French fightback. Both nations will be in Russia for next year’s edition.

Slovakia, led by Russian Superleague-winning coach Vladimir Vujtek for the last time, pushed the USA hard before losing 4-5 in overtime. The Slovaks finished fifth in Group B and missed out on the next round.