With the last games of the qualification stage of the World Championship coming up fast the group standings are beginning to take shape.

In Group B Russia has already secured its place in the last eight and is still battling for top spot with current leader the USA and upcoming opponent Finland. More importantly, though, Oleg Znarok’s team seems to be finding its game at just the right time as it bids to defend the title it won so impressively in Belarus last year. 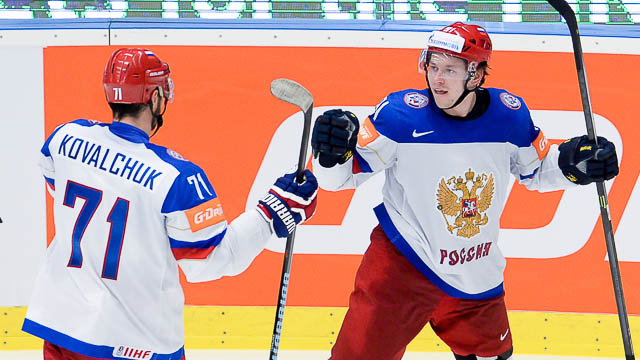 After a slow start saw patchy performances against modest opponents, a two-day break prior to Saturday’s showdown with Belarus looks to have made the difference. A 7-0 drubbing of its neighbor turned Victory Day into a true festival, and an absorbing overtime win against Slovakia confirmed Russia’s progress on Sunday night.

Against Slovakia, the Russians had to face down an enthusiastic, partisan crowd that had made the short journey across the border. The task was made harder by a freakish goal early on when Tomas Kopecky surprised Sergei Bobrovsky with a shot on the turn, but the Red Machine revved back into the game. A Sergei Mozyakin thunderbolt on the power play and a beautiful individual effort from Vladimir Tarasenko made it 2-1 before a moment of class from Slovakia’s LA Kings forward Marion Gaborik took the game to overtime.

Artemy Panarin got the decisive goal in the extras, leaving Znarok excited at his team’s development through the competition.

“Even though we needed overtime to win it, that was our best performance of the competition so far,” he said. “If we keep playing like that we can achieve what we came here for. It was our best game in all areas. It’s true that we didn’t take all our chances, but in terms of dedication and execution of the game plan nobody can question us.”

Panarin, the winning scorer, added: “It wasn’t easy but we won, and that’s the main thing. We were unlucky that they got a flukey goal at the start but in general we played pretty well and created chances. The key thing is to put them away.” 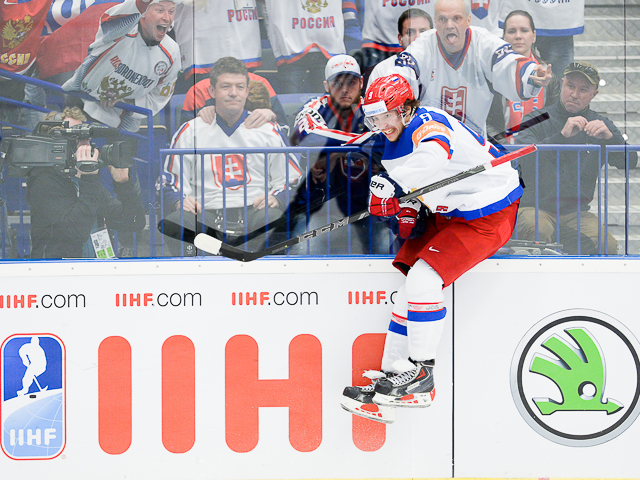 Russia’s next game is against Finland, another team assured of a place in the last eight, and both teams will be jockeying for position to get a favorable opponent to start the knock-out phase.

The Finns have impressed in defence, with four consecutive shut-outs setting a post-war World Championship team record and first choice goalie Pekka Rinne in line to claim the best individual goaltending streak if he can keep Belarus at bay for the first period on Monday.

“Finland will be a tough opponent,” said Znarok. “Those shut-outs show that they have a great defense but we think we more or less know how to play against them and where their weak spots are.”

Slovakia’s loss to Russia puts its hopes of qualification on a knife-edge. Victory over the USA in its final game would give it a chance, but only if Belarus fails to collect more than one point from meetings with Finland and Norway. The Belarusians, now coached by Dave Lewis, could match last year’s run to the play-off round when they were inspired by the home crowd in Minsk.

Elsewhere in Group B Slovenia, featuring CSKA’s Jan Mursak and Slovan forwards Ziga Jeglic and Rok Ticar, will be relegated. Sunday’s 3-1 loss to the USA confirmed the newly-promoted team’s swift return to Division 1A.

In Prague Canada will top Group A. The Maple Leafs have a perfect record after six games, and with Sid Crosby providing the star quality Canada has blasted an impressive 39 goals so far. Sweden and the Czech Republic are battling for second place in the group while the Swiss are set to come in fourth. At the bottom Latvia faces a relegation showdown against France on Tuesday, while Austria needs a win against Germany on Monday to give it a realistic chance of survival.