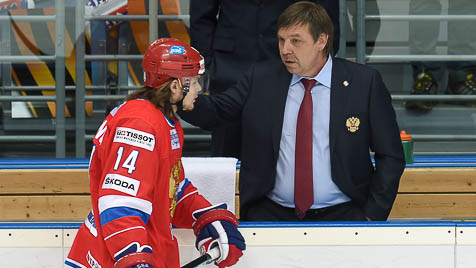 Russia faces off against Norway tonight as it defends its World Championship crown in the Czech Republic. Much is expected of Oleg Znarok’s roster, and especially the NHL stars heading to Ostrava for the championship. But there’s also excitement about the prospect of SKA’s devastating trio of Vadim Shipachyov, Evgeny Dadonov and Artemy Panarin testing their skills in the international arena.

That troika combined to deadly effect in the play-offs, scoring 61 points between them to help SKA lift the Gagarin Cup. Dadonov’s record-breaking tally of 15 goals led the way, while Shipachyov tied with Alexander Radulov for the top point-scorer in post-season. Panarin, meanwhile, rounded off a second hugely impressive season in St. Petersburg and earned himself a contract with the Chicago Blackhawks as well as landing himself a first-ever World Championship call-up.

Indications from Thursday’s training session suggest that they will play on the same line for Russia, just as they do for SKA, with Znarok keen to maintain familiar club combinations in preparation for the battles ahead. And that sounded an alarm for Norwegian forward Patrick Thoresen, who has seen at first hand what these guys can do. He rated his clubmates as the most dangerous line in the KHL and admitted he would be advising his compatriots on how to deal with them.

The SKA connections don’t end with Dadonov, Panarin and Shipachyov, though. Ilya Kovalchuk will wear the ‘C’ for Russia this time while Viktor Tikhonov is looking to repeat his scoring feats of 2014, where his 16 points made him the most productive player in Minsk as Russia powered to gold.

After a frustrating season with SKA, Tikhonov believes he has recovered his form following his international call-up, and looks set to begin the competition as a center for Metallurg Magnitogorsk duo Sergei Mozyakin and Danis Zaripov. “In the friendly games [before the Worlds] I felt my game was coming back together and chances were starting to come. That gave me a lot of confidence and I hope I can show my best game once again here. Zaripov and Mozyakin are great players and it’s easy to play alongside them. You know they’ll always create chances and you just need to get into the right positions for them. Right now we can’t say for sure how we’ll line up [against Norway] but I hope I’ll be on their line, and I’m just as comfortable in the center as out on the wing.”

Russia’s opening game against Norway faces off in Ostrava on Friday at 21:15 Moscow time.