The IX Gazprom Neft Cup, the international tournament for U-11 teams from KHL clubs, climaxed on Wednesday with an impressive victory by the youngsters of Dynamo Moscow, who shrugged off an epic journey from Saint Petersburg to seal a 4-0 win over Avangard at the latter’s home stadium, the Arena Omsk. It is the third time in a row a Moscow team has won the event, although on the previous two occasions it was Dynamo’s rivals, CSKA, who lifted the coveted trophy.

The Gazprom Neft Cup has long been recognized as Europe’s biggest international tournament for teams of under-11s, and like the young players themselves, it keeps growing. This year no fewer than 25 teams from 6 different nations were divided into two groups, East and West, hosted by cities in different continents – Saint Petersburg in European Russia and Omsk in Siberia – with the Group West winners flying to Omsk for the Super-Final. 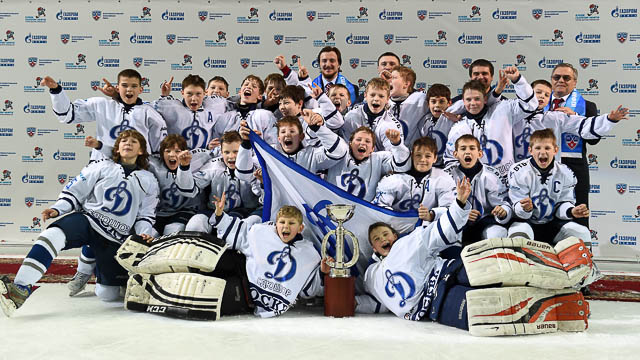 Alexander Dybal, head of the tournament’s organizing committee and a member of the Gazprom Neft Board of Directors, outlined the importance of the event: “Achieving the status of official KHL tournament enabled the Gazprom Neft Cup to become an integral part of the system which nurtures young talent. We try to provide all the necessary conditions for the event to act as a significant milestone on a player’s journey from children’s hockey, to youth level, and eventually toward signing a contract as a senior professional with a KHL team. I hope that it will not be very long before we see the lads who took part in previous Gazprom Neft Cups playing as adults in the colors of Team Russia.”

A clear indication of the tournament’s rapid progress is the impressive increase in interest among the public. More than 6,000 flocked to Petersburg’s Ice Palace on the 25th of April to watch this year’s opening ceremony and the SKA vs. CSKA Group West game that followed. On the same day, the Group East opening, which featured a contest between Avangard and Ak Bars, drew a mighty 9,000 to the Arena Omsk, and over 7,000 returned on Wednesday to watch the Super-Final.

The future looks bright – for the event and its participants.
#GPN
Share
Прямая ссылка на материал