For the second year in a row, Team Russia’s management, coaches and players began their preparations for the World Championships with a visit to Moscow’s Kuntsevo cemetery, the final resting place of the legendary Soviet forward, Valery Kharlamov. Among the delegation were Boris Mikhailov and Vladimir Petrov, who were Kharlamov’s partners in one of the most fearsome offensive lines of all time.

Many representatives of the media were also present, and after a moving ceremony during which flowers and other tributes were placed at the graveside, Arkady Rotenberg and Ilya Kovalchuk took time out to answer some questions from the assembled journalists. Inevitably, there was much talk about the possible participation of Pittsburgh’s Evgeny Malkin, whose team was eliminated from the Stanley Cup play-offs amid reports that Malkin was playing with a damaged ankle. 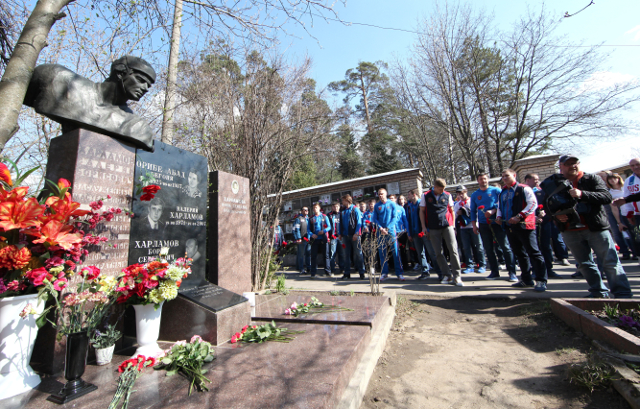 Arkady Rotenberg said the coaching staff expected the star forward to take part in the tournament: “There’s been no word from the player about withdrawing; if he’s ruled fit, then we believe he’ll play. We will hope for the best. His presence would be very good for the team.”

A short while later, the official IIHF World Championships website stated that Malkin is set to participate in the tournament, although it should be remembered that the forward must first undergo a full medical examination, so it is the doctors who will have the final say. There has been some stinging criticism of Malkin in the western media, mainly due to his recent barren spell in front of goal, and some have questioned the wisdom of including him in the Russian roster, but a player with his status and reputation is unlikely to take too much notice of sniping from journalists.

Head coach Oleg Znarok is also leaving places in the roster open for two more NHL forwards, Nikolai Kulyomin of the New York Islanders and Vladimir Tarasenko of the St. Louis Blues. The latter in particular has had an outstanding season in North America, and his presence would be a bonus for any team. 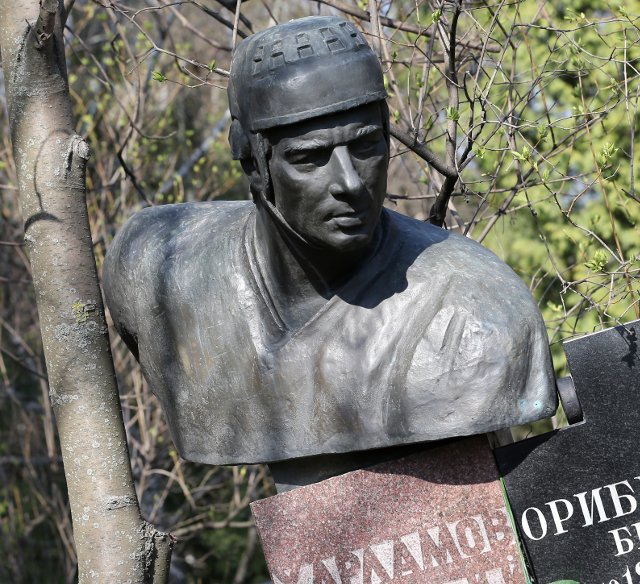 The captain of the Russians will be Ilya Kovalchuk - another forward on top of his game after a brilliant season: “Oleg Znarok just walked up to me and said he wanted me to be team captain. For me it's a huge responsibility. I have worn the captain’s armband and led the team out onto the ice before, so I know how much it means. It is a great honor for me to captain these guys and this team, and of course we’ll try our best to win achieve maximum results.”

Both Kovalchuk and his coach would certainly welcome the addition of Alexander Ovechkin. One of the lasting images of 2014 was the sight of Znarok and Ovechkin out on the ice, wrapped in the Russian flag, and wildly celebrating victory in the World Championships. However, Alexander’s Washington Capitals dug out a Game 7 victory against the Islanders, so he will surely stay across the ocean on a quest for the Stanley Cup, along with his young partner, Evgeny Kuznetsov, whose sublime goal on Monday turned out to be the series winner.

“We should just wish them the best of luck, especially Zhenya (Kuznetsov), who’s been awesome in recent games. With the help of his more experienced partner, he’s really leading from the front. Let’s hope they take the team all the way; I know they’ll be cheering for us," said Kovalchuk.

Injury cruelly robbed Kovalchuk of a chance to be part of last year’s triumph, but the journalists reminded him of his glorious overtime game-winner against Canada in the 2008 final, and whether he expected history to repeat itself.

“I don't like making predictions," said the captain. “The main thing is that we are physically and mentally prepared. When we get to the Czech Republic, we will give everything we’ve got and play as well as we can. We can talk about the results when the tournament is over.”

The Russian national team flies out to the Czech Republic on Wednesday, 29th of April, and plays its first game of the World Championships on Friday, 1st of May, against Norway.
#wc
Share
Прямая ссылка на материал