SKA is just one game away from lifting the first major trophy in the club’s history after edging Ak Bars 3-2 on the night to take a 3-1 series lead. After a wait of almost 70 years the St. Petersburg team goes to Kazan on Sunday with a golden chance to end that long, long drought and claim the biggest prize in the Russian game for the first time.

SKA made a perfect start to the game, scoring with its first attack after just 38 seconds. Kovalchuk was the architect advancing down the right into a shooting position only to slip the puck across to the unmarked Patrick Thoresen. The Norwegian made no mistake, firing into a half-empty goal as Anders Nilsson sprawled in vain across his crease. 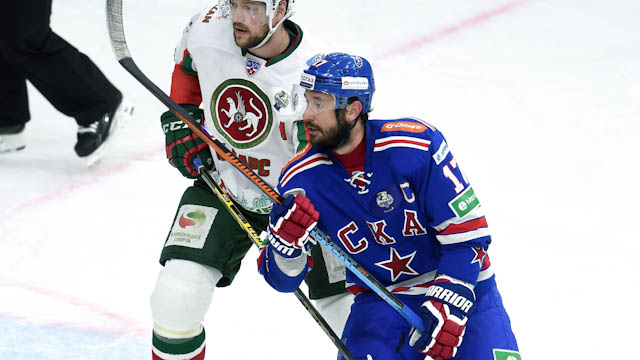 It was the fourth time in this series that SKA had taken a first-period lead, but never before had they got ahead so quickly. Ak Bars tried to get on the front foot, outshooting its opponent 13-7 but having to wait before getting back on level terms.

Exactly halfway through Moller tied the game, firing in from the right-hand circle while Mikhail Varnakov screened goalie Mikko Koskinen. Two days earlier Ak Bars had recovered from 0-1 to win the game; suddenly their traveling fans began to believe a repeat was on the cards.

But the reprieve was short-lived as SKA wasted little time in regaining the lead with another power play goal. There seemed to be relatively little danger when Kovalchuk collected the puck from Koskinen and fed Jimmie Eriksson in center ice. But the Swede saw the space to advance and launch a wrist shot that did enough to beat Nilsson and snap the 1-1 scoreline after just three minutes. 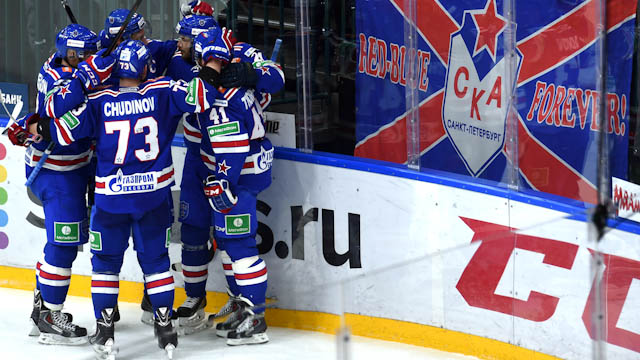 Then came Dadonov with a goal that combined flair and fortune in equal measure. Breaking from his own zone and exchanging a pass with Kovalchuk on the blue line, the forward advanced to score a fantastic individual goal, wrapping it up by bouncing the puck off defenseman Ilya Nikulin’s skate and swatting the rebound behind Nilsson from a tight angle to put SKA in control early in the third. That was Dadonov’s 14th post-season goal and after doing so much to sink CSKA in the previous round the Russian international now has another major contribution in this final series.

Ak Bars refused to yield until the very last: the Kazan team did everything possible to take the game to SKA in the closing stages. But Azevedo’s last-minute goal, firing home a one-timer from close range after Artyom Lukoyanov’s deft pass took out two defensemen on the slot, came too late to salvage the game. The Tatars, twice Gagarin Cup champions, return home in a last attempt to save the series on Sunday; SKA shoots for the ultimate victory.