Ak Bars gets off the mark. Gagarin Cup Finals, Game 3

The Gagarin Cup finals came roaring back to life thanks to a battling recovery from Ak Bars. Trailing 2-0 in the series and 1-0 on the night as the third period got underway, the Kazan team turned the game around in the final 15 minutes of Game 3 … and took a crucial first step along the path of retrieving this series.

Alexander Svitov’s late goal saw Ak Bars grab a vital come-from-behind win to get off the mark at last. He struck in the 56th minute to complete a third-period fightback that not only salvaged the game but also transformed the progress of the season.

It wasn’t, perhaps, a highlight reel shot: shrugging off the attentions of Anton Belov to punt in a hopeful effort from middle distance, Svitov found that the element of surprise, rather than any raw power, was enough to beat Mikko Koskinen and give the Kazan team a precious life-line in its quest for a third Gagarin Cup crown. 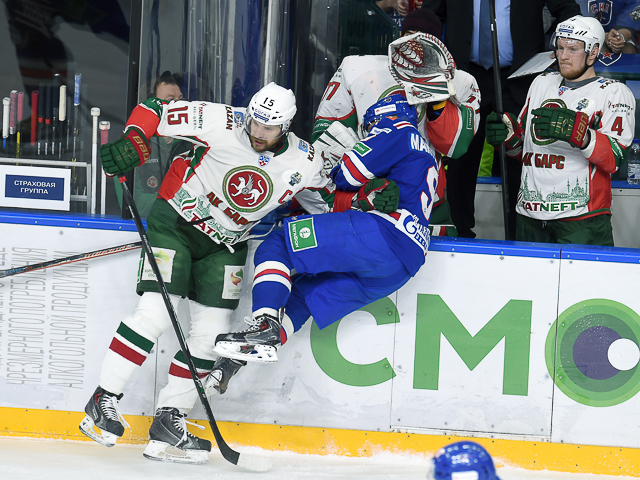 There were still some nervous moments to endure. SKA earned a power play moments after Svitov’s goal and Anders Nilsson had to be at his best to deny Ilya Kovalchuk after some neat passing around the zone. But the Army Men’s special teams haven’t really clicked yet in this series and that chance went begging. Worse was to come as Jimmie Eriksson followed Kirill Petrov to the sin-bin, leaving the home team shorthanded until the last few seconds and robbing the final storm of its full fury.

The turnaround was striking: for long periods in this game it looked as if SKA was on its way to a 3-0 lead that would take it to the brink of glory. Tony Martensson opened the scoring in the 15th minute, getting the deftest of touches on Maxim Chudinov’s shot from the point to deceive Nilsson and set home fans dreaming of an unprecedented grand final sweep. That lead lasted – and perhaps should have been extended late in the second period when SKA had a long 5-on-3 advantage but failed to extend its lead. Meanwhile Ak Bars saw its goalless streak extend to 107 minutes before finally grabbing an equalizer.

The goal went to defenseman Evgeny Medvedev, redeeming himself after perhaps being guilty of screening his goalie on the opener. His slap shot whistled in from the point, evading Viktor Tikhonov’s attempt to block and skipping through heavy traffic before beating Koskinen low through the five-hole to tie the game and reignite Ak Bars’ hopes. A few minutes later those hopes were transformed into a triumphant blaze by Svitov’s game-winner, setting up an intriguing Game 4 – and beyond.