It wasn’t supposed to be like this. Low-scoring hockey was supposed to favor Ak Bars, the team that came to the grand final on the back of disciplined defense and a willingness to wait for its opponent to stumble.

Instead after two games in Kazan the team trails 2-0 to SKA – and Monday’s Game 2 ended with a 1-0 scoreline more closely associated with Ak Bars’ minimalist progress through post-season to date.

The decisive goal came late in the first period through Anton Burdasov. He collected Roman Rukavishnikov’s pass out of defense, surged down the left flank and scored on Anders Nilsson at the second attempt. The Swedish goalie, so impressive in the series against Avangard and Sibir, may feel he could have done better with his positioning as the SKA forward fired home the rebound from an incredibly tight angle. 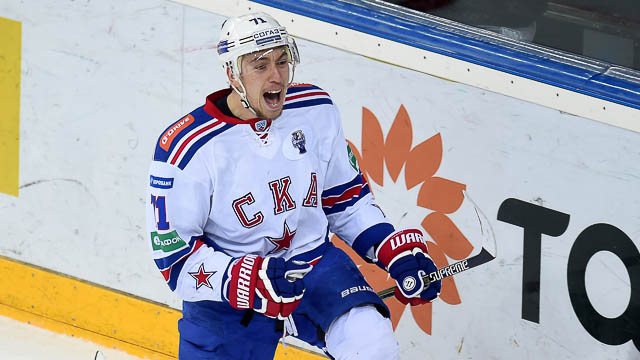 That separated the teams after an evenly-matched opening stanza: chances didn’t flow regularly, but cropped up at both ends of the ice. Subsequently, though, the pattern of play changed. SKA was able to hold back a little, relying on goalie Mikko Koskinen’s skills between the piping to defuse much of the danger created by Ak Bars and striking out on the breakaway in search of a more comfortable advantage. Twice the visitor hit the frame of the goal – once through Ilya Kovalchuk, again through Rukavishnikov – as head coach Vyacheslav Bykov turned the tactical tables on his opponent and presented Zinetula Bilyaletdinov with a virtual facsimile of the Kazan playbook.

However, amid the disappointment of defeat there were some signs of encouragement for the home team. Unlike Game 1, Ak Bars never found itself blown away: the rapier-like combinations of Evgeny Dadonov’s line were sheathed and Koskinen had to remain alert until the very last to secure his third shut-out of the post-season with 19 saves to his credit. 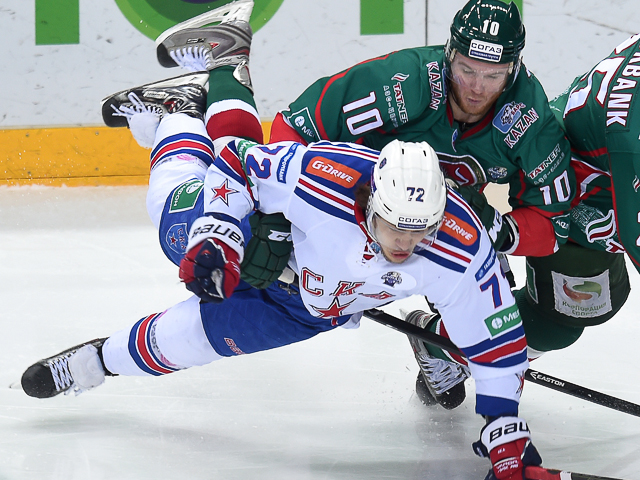 But there is greater ground for excitement in St. Petersburg: if Game 1 told us what we already know – that SKA can score on any defense – Monday’s encounter proved that it can reliably blunt any offense when the need arises. Strong performances on the blue line, with Anton Belov recalling his dominance of Dynamo back in 2012 before suspension robbed Avangard of his services and – perhaps – turned that series upside down, made a huge contribution to a sixth successive play-off win for the Red-and-Blue roster.

For SKA the journey home offers a chance to follow up its history-making recovery from 0-3 in the Western Conference final with a potential grand final sweep – another unprecedented achievement. For Ak Bars, meanwhile, the pressure is on the offense to find answers to Koskinen’s imperious form and get on the board in the series at last. Stay tuned for Game 3 on Wednesday in St. Petersburg.