SKA wasted little time in setting down a marker in the Gagarin Cup final series, powering to victory over Ak Bars in Game 1 in Kazan. Once again Evgeny Dadonov’s line was at the heart of SKA’s success and the leading play-off goalscorer took his personal tally to 13 with a superb individual effort early in the second stanza.

The clash was billed as a battle between SKA’s open, attacking style and Ak Bars’ rock-solid defense – a case of the irresistible force meeting the immovable object – and on this evidence that ancient philosophical query is being resolved in favor of pace and motion rather than strength and rigidity. SKA put the pressure on its host by opening the scoring and then stepped up a gear to stretch the lead with two quick goals at the start of the third.

That left Ak Bars needing to get its own offense into play more impressively than we’ve seen through much of this year’s post-season – Zinetula Bilyaletdinov’s men have yet to score more than three in a play-off game this term. The task proved too much for the Kazan team as SKA defended reliably to limit the opportunities for its rival in this game.

To make matters worse for Ak Bars, the opening goal came from a rare defensive error. The home penalty kill went awry as a shot came in from Ilya Kovalchuk; Konstantin Korneyev, mindful of the presence of the top post-season goalscorer Evgeny Dadonov, attempted to pass the rebound out of the danger zone but instead picked out the unmarked Artemy Panarin. The forward accepted the gift, firing home from a tight angle as Anders Nilsson sprawled back across his crease in vain. 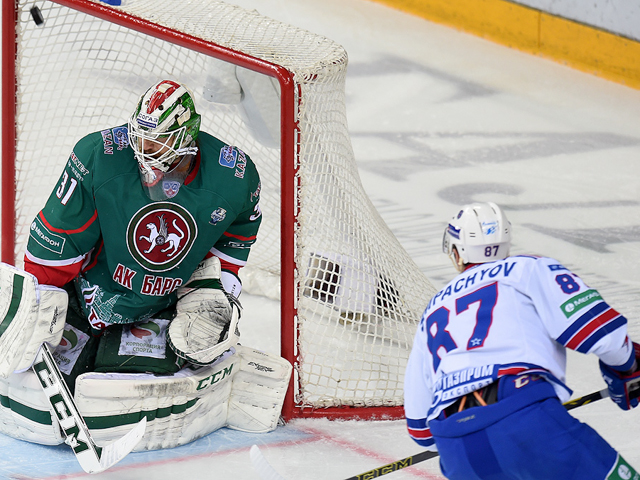 Needing to chase the game, Ak Bars played the remaining four minutes of the opening frame at a higher tempo, and Alexander Svitov might have tied it up quickly with a one-on-one breakout. But it was SKA that was next on the scoresheet, firing two quick goals early in the second. Patrick Thoresen, the game-winner in the final two games against CSKA, made it 2-0 with a blistering backhand off a Kovalchuk pass. Then came Dadonov’s master-class, racing onto Vadim Shipachyov’s pass down the left, turning experienced defenseman Vladimir Denisov inside out as if the Belarusian international was a rookie debutant and finally keeping his balance to pivot on one skate, slip the puck away from Nilsson and score as he tumbled to the ice. Expect to see that one on the highlight reels throughout the summer.

Suddenly Ak Bars’ chances were all but extinguished. SKA showed it was no slouch on defense either, limiting its host to a few half-chances for the rest of a middle session marred by a couple of tussles between the players. The third period brought a goal for Shipachyov, ensuring that once again all of SKA’s second line found the net.

The final few minutes saw Ak Bars get on the scoresheet at last. Justin Azevedo – who scored in every game of last season’s final for Lev Prague – found the net for his eighth final series games in a row to reduce the deficit. Then Stepan Zakharchuk made it 2-4, but there was to be no miraculous recovery this time.