The Championship’s most precious trophy returned to familiar soil this morning as it stepped onto the platform at Kazan. The occasion must have felt like a homecoming to those who gathered here to greet the train from Moscow, as this is the very city where, six years ago, the Cup began its epic and continuing journey across the ever-expanding territory of the KHL.

In that time, the Gagarin Cup has travelled many miles by land and by air, never more so than a mere twelve months ago when it jetted back and forth between Magnitogorsk and Prague. That record looks likely to last a long time, no doubt until either Amur or Admiral breaks through to the final two, but for Kazan the train will suffice, as it did back in 2009, since when so much has happened in hockey here and elsewhere that to recall that first final series seems akin to peering through the swirling mists of ancient history. 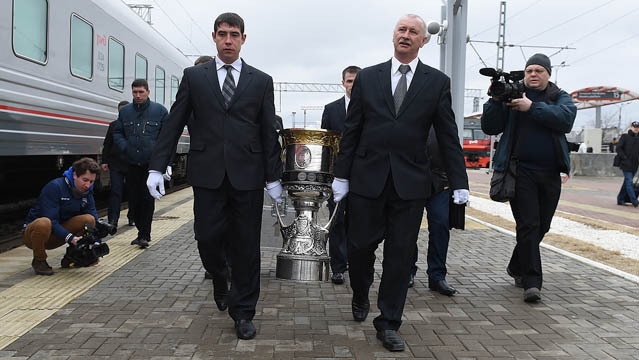 “The first trip was a real adventure,” says Sergei Kozlov, the League’s Head of Competitions, looking back now on his maiden voyage taking the Cup to Kazan. “We squeezed the trophy into our sleeper compartment on the train, with no security or bodyguards. The train company offered us a secure place in which to store it, but we dare not let it out of our sight, so it stayed with us all through the night. I was too excited to sleep, in any case.”

“We noticed that the trophy, in its cylindrical packing case, was almost the same height as the table by the window, so we covered it with a table cloth and crammed it under the table, and with the Cup thus “disguised,” we could fend off many of the more persistent journalists on the train. They were also traveling to the final and kept pestering us with questions about where and when they could see and photograph the trophy. We couldn’t risk causing a media frenzy, so we had to disappoint them.”

“Many people in the compartment would see us, sit down, and chat about this and that, and none of them realized they were in touching distance of hockey’s Holy Grail, even though we were sitting awkwardly next to this ridiculously large and mysterious package. When we finally arrived we made sure we alighted from the train with lightning speed but we were still surrounded by journalists as we were passing the mail wagon of the train. We just charged to the car and went straight to the arena, to deliver the trophy into safe hands as soon as possible.” 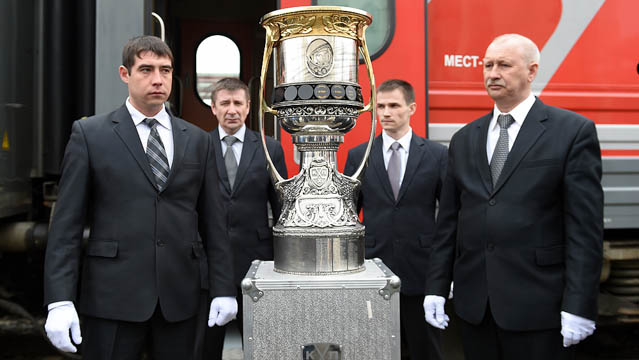 A lot of water has flown under the Tatarstan capital’s Volga and Kazanka bridges since those days. Now the transport of the trophy is a tradition performed with precision, planned down to the slightest details, while the city of Kazan has become markedly cleaner, much more modern and yet even more beautiful. And now the Gagarin Cup travels inside an attractive and ornate trophy case - tough as a bank vault, but with a sparkling silver exterior and wheels for ease of movement. Of course, another pleasant addition is visible on the trophy itself – the engraved names of the previous champions.

Amid the many changes, however, one truth remains: the Gagarin Cup is still the most beautiful, the most recognizable and the most coveted prize of any sport in the country, and today, the two best teams in the biggest League in the world will begin their fight for the right to carve their names on its glittering surface.